Summertime Chi (now throw your hands up in the sky) 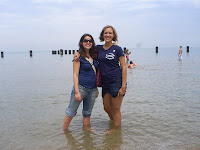 So Tierra came and visited for five glorious days last week as part of her massive road trip and while my liver, checkbook, and BMI are probably secretly glad that she's gone, the rest of me absolutely loved having her here and wishes she would stay forever. I sometimes forget how amazing Chicago is in the summer. I'm so busy working and performing and running around that I never stop to be like, "damn, B. This is kind of the life."

While Tierra was here we went to my very first Wrigley field baseball game (which may also be my very first MLB stadium game - except of course for the one when I got kidnapped, but that was just batting practice so it doesn't count). I've decided that game and the Chicago Fire game this weekend, that I love live sports. The whole sports thing is still kind of new and bizarre (1 year of caring v. 22 years of not caring = big difference).

Also - I would like to point out that I'm fairly sure this was my first live men's professional game and it SUCKED where as ALL of the US women's games I've been to (both World Cup and otherwise in DC) have been amazing.

I also hung out with some random people while Tierra was here, because we pretty much hung out with whomever was around and all of them were so warm and welcoming which made me so happy - I've managed to make friends with some grade A midwesterners.

Tierra also got to see me perform both long and short form improv and got to see some great sketch comedy (as well as a decent harold). This is such a huge part of my life now. And she's the first one who's come out and actually seen it all go down. She seemed to love it.

I noticed while she was here that boys LOVED her. There were no nights that went by without some guy walking up to us and telling her that she is gorgeous. While, everyone loves a self esteem boost for themselves - I think I almost loved it more for her (I have plenty of problems with boys without complete strangers walking up to me-- also she's got that exotic halfrican thing going on).

So - the moral? Come to Chicago. While its gorgeous and summer-y. Not when its sucky and grey. Meet my amazing friends. See me be funny/an asshole on stage. Experience why I think that this city might be for keeps (at least for a few more years).
Posted by Rachel at 10:56 PM 2 comments:

"The most unfair thing about life is the way it ends. I mean, life is tough. It takes up a lot of your time. What do you get at the end of it? A Death! What's that, a bonus? I think the life cycle is all backwards. You should die first; get it out of the way. Then you live in an old age home. You get kicked out when you're too young, you get a gold watch, you go to work. You work forty years until you're young enough to enjoy your retirement. You do drugs, alcohol, you party, you get ready for high school. You go to grade school, you become a kid, you play, you have no responsibilities, you become a little baby, you go back into the womb, you spend your last nine months floating

-George Carlin.
Posted by Rachel at 11:15 AM No comments:

So I switched birth control pills recently (yeah, that's right - we're gonna get real personal right about now). My old one was playing a huge part in the disaster that was my face and at the age of 23 I think I'm old enough to make medical choices based on vanity.

So I decided to switch. My NP is nervous because this new one has diuretic qualities as does another medication I'm on. And the two diuretics combined apparently will give me a potassium deficiency. I don't really understand the mechanics of it. But these people went to school for about 80 years, so I'll trust them.

For the first month, the pill seemed to be working great. There were no babies (which, um, let's leave that part of the equation alone for now). I switched right around the time I started my new job and was told by my mother that I might have an insulin deficiency of some sort (my mother did NOT go to school for 80 years, but she did go for eight, so I trust her medical opinion). This maybe the cause of my recent weight gain and so I've decided to go really healthy (fresh fruits and veggies! vegetarian! (except for pork and Nonna's meat sauce) 100 Calorie Snack Packs!)

I also now have week days off with the new job and instead of lounging around and watching West Wing DVD's I've been working hard at keeping my days off busy. Writing, going to the gym, productive shopping, rearranging furniture etc.

So here is this me that is kind of different from the me of about 3 months ago. I am not really thinking about it until I talk to a friend of mine last night about birth control (this conversation was naturally brought on by the news/gossip that yet another girl from our High School class is up the spout). I mentioned my new pill and she said that it had made her slightly loopy. Then I thought about it for a minute and realized...

I'm pretty sure there are uppers in my birth control.

First of all, I'm hungry. All the time. I equated this with suddenly being on my feet for 8 hours a day but seriously, I find myself constantly eating. While normally uppers don't give you this (hence why they are diet pills) I think its the combination of the estro-whatever and the crack that literally mean I eat for eight straight hours if I let myself. I'm being good about eating grapes and whole wheat sandwichs and trying to keep my caloric intake around 1000 calories a day, but still - your body cannot digest food if you don't stop chewing.

Second- This productive behavior is not like me at all. I mean sure, I get stuff done, but I get it done at the last second, if there isn't anything good on TV. Recently I've taken to cleaning the bathroom without being asked and without there being actual organisms growing in it, I've started going to the gym for 90 minutes to two hours if given the opportunity and actually spending that time working out instead of just sitting around on a yoga mat listening to my ipod. I do laundry before I run out of underwear. I'm redecorating my apartment and making grown up purchases like couches and bowls (although, in my old-self's defense, the bowls are too small to be practical and polka dotted). My room is organized. I'm cooking for myself instead of eating things out of a black plastic dish. Also, the fact that I am even CONSIDERING giving up chicken nuggets, is - to me, kind of crazy. I mean, I laugh at vegatarians, and people who run on tredmills, and own plates. Since when have I become one of those people?

Obviously, it is because my birth control pill is full of crack.
Posted by Rachel at 3:01 PM 2 comments: