I've had a phenomonally sucky week. Not that anything too terrible happened, but when all the not so terrible things are piled on top of one another it kind of makes me want to crawl into a hole and cancel my Grown Up Club membership.

And there were a few redeemable things that happened but none of them were so earth shattering that they made up for everything else.

I heard my two most favorite songs from 5th grade. "Don't Turn Around" and "The Sign" by Ace of Base. That's right BOTH of those songs worked their ways into my week coincidentally (once was when I was in my boss's car trying not to cry about the cluster fuck of my life, the other was when I was in the bank today taking out more of my rapidly dwindling checking account).

It was awesome. I still know every single word to both. Which is pretty impressive considering all the brain cells I've destroyed since I was ten.

When The Sign first came out I bought the single. On cassette (yeah, thats right. Cassette). We listened to it every morning on the bus to school. We had, I realize now, the coolest bus driver ever. Seriously, the fact that she was willing to listen to the same effin' song about 40,000 times in 5 months is pretty incredible. She was probably drunk the whole time.

Then I got the full album on CD and I'm pretty sure my best friend/worst enemy/next door neighbor stole it. Dumb bitch.

Ace of Base is the first band I remember liking that wasn't influenced by my parents. They were the first thing that mainstream media got me all worked up about. They were my first act of defiance and rebellion against the parentals (my Mom hated them...with good reason, their music is kind of terrible). They were one of the first little threads of grown-up real person-ness that I had.

Anyway, I'm not really sure what happened to Ace of Base, I guess they went back to Sweden or wherever and faded into oblivion. I'm sure one or two of them has been on some sort of VH-1 reality show. But no matter how terrible and nonsensical (have you listened to the lyrics?) their music is I will still love it. And it'll still make my day.
Posted by Rachel at 6:49 PM 1 comment: 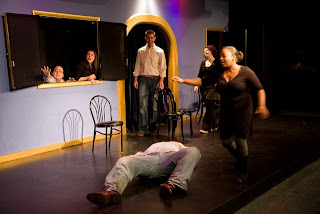 So. I have become a bad blogger, when I started this, my millionth (approx.) blog I wanted it to be awesome. A Tomato Nation, or a Pamie.com. Instead its... um, nothing anymore. What I didn't want it to be was a boring rehash of the daily events. And so instead its nothing. Lame.

Its not that nothing happens, oh no. In the past several months (pretty much since my 23rd birthday) my life has become quite the interesting little tale, full of happiness and crying and making out and cats peeing on my new pier 1 chair but I never remember that I should be writing it down. And I should be- because the more I write, the better I get... so I'm going to start with the writing... I hope. I mean there are other things I need to write too - like cover letters, and novels, and my very first comedy sketch...

Maybe I'll stay off the facebook for a day or two (doubtful) try to remember what I did on the internet before the face' sucked me into its vortex of pictures and bumper stickers.

The photo: Me and some of the best people I've ever met - on stage at the iO theatre in Chicago. Basically this picture is my dream come true.
Posted by Rachel at 8:09 PM 1 comment: