The Other White Meat

On Monday night, I took my friend out to dinner at Prasino so that she could tell me all about her adventures as a social worker - so I can maybe think about going to grad school (since everyone else got to do it). I had grilled thai curry pork loin with brown rice, mango salad, coconut cashew sauce.

On Tuesday, I did my civic duty and took part in Chicago Craft Beer Week and went to Burger Bar for the Dogfish Head Beer Dinner. Naturally, I had about 4 crab cakes (they were so. Maryland-y.) but also, as much short rib as they would put on my plate.

On Thursday, We went to Adler After Dark which is way, way more trendy than I was expecting. So many people getting drunk and looking at stars! It was Hawaii night which apparently means pulled pork sandwiches (I guess that's as close as you get to a pig roast when you have an in-house catering company) which were surprisingly delicious (I used to live on museum food, I know when its good).

On Friday, we had our first and last happy hour of the summer in the about-to-be-old apartment. It is by far my newest favorite tradition. When all our friends come over on Friday night and we sit and drink and grill and talk about the week and everyone gets to go home at a socially acceptable hour. Last night we ate brats, drank corona and say good bye to my lovely view.

Tonight, after a long day of packing and moving we continued the week-long goodbye to Wicker Park with carry out from Steve's Tacos (otherwise known as Big Star) including Tacos al Pastor (pork shoulder) and Tacos de Panza (pork belly).

Two morals to this blog:

1- It is very clearly Summer. I am never, ever this social during any other time of year. The first few weeks of Summer make me want to shake off my hibernation and remember why I love this city so much. Good times with long-unseen friends. Delightful.

2- As someone who considers herself a bacon-only pork eater. I clearly ate about a year's worth of Babe this week. And it was amazing. Man. Oh. Man. There are parts of that animal (the non-ham parts) that are so. SO! good. And as a summer time bonus, it pairs better with beer than beef or chicken.

I'm finna talk about my mama if yall don't mind

Its Mother's Day. And I would be remiss not to mention the most important Mom I know. The one who ever so patiently waited two weeks past my due date for me to make my grand entrance. And then loved all 10 pounds of me even though I was sickly and required lots of special attention (typical).

There are a billion reasons why my Mom is the bees knees. But my Dad (who is also pretty great) reminded me of one of my favorites this morning.

When we were all a lot younger we lived in Washington D.C. in a townhouse with a yard and a toy room in the Mount Pleasant neighborhood which had its share of problems in the mid-1980's.

Just down the street was Our Church. It looks like this.

Some day I will write more about how much this place and the people who came with were game changers in my existence. But this was not only just Our Church - my Mom worked here as the Parish Administrator (a two-fer, if you will)

And in 1988 - when things were really bad, and people were selling drugs literally on the steps of the church, two young men were killed on the sidewalk in front of the building.

Something had to be done. So my Mom decided to have a vigil.

She sat on the steps of the church, every night, with some other amazing folks, as the sun set. And people didn't sell drugs. Were they being sold somewhere else instead? Maybe - but my Mom was doing her part to keep her family and community safe.

Every time I think about this story - it makes my heart burst with pride. And I recognize where my fierce determination to do good comes from. In the same situation, I hope I would find the same spirited stubbornness. A "Hey you kids, get off my lawn," mentality with a "let's change our corner of the world," mission.

Happy Mother's Day, Mom. Thanks for keeping me safe. 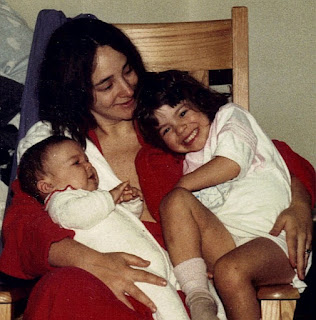 (You can read more about this story and Our Church here)
Posted by Rachel at 10:25 PM 2 comments:

Sometimes I get lost on the internet.

This happens to everyone, right? It can't just be me, right? That you're just taking a four-minute break from your first-of-three 12-hour workdays and then all of a sudden you wake up and realize you've been reading old blog posts from a friend (errebody check your stats, see if it was you I was creepin' on)?

I have a lot of work to do today, tomorrow, and the next but sometimes I just need to get lost in words. My own words, other people's, whatever. I need words that are more meaningful than the ones I get paid to read and write.

So thanks everyone - for filling up the internet with all your thoughts so I can read them when I am taking a break from stress-eating cookies.
Posted by Rachel at 6:22 PM No comments:

I have been thinking a lot about Barack Obama's interview today and it took a few hours before I realized why it matters as much as it does to me.

Its a way to start changing the minds of uninformed kids who I want to grow up to be awesome.

I know a bunch of really great kids who are new to this country. And through the fault of no one they have become very involved with various churches in the city. It makes sense - you come to a brand new country and you're going to look for support and guidance wherever you can and churches are good at being there.

But some churches come with Ideas.

And because I am just me, and I am not a Church that is backed up by Parents and a Community (well, I come with a community, but it is smaller and, for understandable reasons, less valued) I felt powerless to try to argue with this biblical reasoning that everyone was so confident in believing.

Meekly, I could just say I hope they treat everyone respectfully no matter who they love. And they came back with, "but its wrong." And I bit my tongue - because they're seven and twelve and it felt like a battle I wasn't ready to have and lose.

But NOW?! Now its not just me fighting this battle alone. It's me and my good friend, Barack Obama - someone that all of these kids worship for looking like them and having stories that sound kind of like their own. In their eyes he does no wrong.

There are so many losing battles in the world, in politics and in my own little world of trying to help make things better wherever I can - and finally I feel like there is one I might be able to win.

***And I know that he is being kind of wishy-washy by saying that its the states' right to decide, but lets be real - the kids I know in particular probably would actually care more about his personal opinions than any sort of laws he passed.
Posted by Rachel at 9:39 PM No comments: