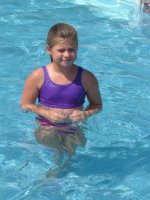 My little cousin Courtney, who is not-so-little anymore is in the process of having a slumber party to celebrate her 10th birthday. She only has two friends over, which is a totally respectable amount...

I now understand why eventually my mother refused to ever let there be another slumber party again. Little girls are loud. And walls anywhere besides a top secret military bunker are not thick enough to keep out the giggles and the screams and the TV. And this is only two kids. I used to have slumber parties with up to 5 friends!!!

Sorry Mom and Dad. My bad.

I'm not so much liking this getting older thing. I was in the car today and I could not remember what being 10 was like. I had no memory of 10, no real idea of what that year held for me until Courtney's little friend came up to me and asked if I liked sea food.

All of a sudden I remembered 10. It blends into 9 and 11 a little bit but it's all there. The uncertainty about boys (gross or cute?), body image (the training bra debacle) and what was "cool." I also remember that it was still okay to play pretend, and with barbies and occasionally just run around the backyard screaming. That's pretty much the last year of that. Once you hit 11, it stops being uncertainty and becomes self conciousness. At 11 you may want to play dress up but know that you can only do it by yourself or maybe with your best friend for fear of looking like "a baby."

10 is awesome. The space between 10 and 16 is bleak. 13 is okay, but really-- that six years sucks. Hard. And from what I've experenced, except for the alcohol and making out, its pretty much all down hill from there anyway.


Happy Birthday Courtney. Don't grow up too fast.
Posted by Rachel at 10:33 PM No comments:

Crossing the pond with The Beatles

I don't quite know why, but it seems that nothing really blog-worthy has happened since I've been on Nantucket. Yes I have a new job, new house, new roommate, new almost-friends (we don't know each other well enough for me to call them friends but they will be), I've seen celebrities, I've gotten drunk, I've flirted, danced, lied, made bad choices, made good choices, spent money, spent more money, talked to Tierra like a bajillion times on the phone, been home sick, considered spending the rest of my life here, and just kind of hung out. I've yet to go to the beach (maybe today), but I'm still dealing with the last dredges of poison ivy so I'm not too distraught about that.

Seriously?! Its weird, everything is fine and okay but...I keep expecting something to happen. I keep comparing this summer to Theatre on the Hill 2004 and my trip to Cape Town, which is kind of stupid because while those events had a lot in common (many people in a small confined space who had to forge relationships with the help of much alcohol and who had very little actual work to do), this summer I'm working full time (today is my first day off in 7 days...gross) only living with one person I'm not related to and since she doesn't have the same running-rampant alcoholic gene I do we've only gone out once. And we had a great time. So I shouldn't complain. And I've only been here a week and I have like 10 weeks left. So I really should just give fate a litte time to work itself out.

Anyway, the one thing that I kept thinking about that was almost blog-worthy in its total randomness is the title of the blog. On my walk to work there is a "puddle", in quotes because the thing is pond-sized. It should be on a map, there should be fishes living in it. It comes when there has been a day or more of rain because the people creating the drainage system for the island took a big old bong hit before they did this little patch of road. If its sunny for a few days it dries up, but this is Nantucket, so the weather is as reliable as a crack whore so, it's pretty much always there. And completely unavoidable on my journey to work.

So, normally I try to look just pathetic and dim enough to get someone to drive me over the puddle, but occasionally my timing is totally off, forcing me to find my own way over. So I take off my shoes and pull up the legs of my jeans and grumble my way over. But EVERY time this has happened, a Beatles song (twice Let it Be, once Dig a Pony) has been playing on my ipod.
Posted by Rachel at 12:20 PM No comments:

You can't spell, "I've really lost the will to live" without I-V-Y

It is not going away. Everyone said it would go away but they lied. They are liars. I am still covered in this nonsense and I'm wondering if it's due to the wonder drugs that are running merrily through my system and effing everything up. If that wasn't bad enough, it seems to be spreading. It was on my forearms but now its on my upper arms (and getting bigger) as well as on on.my.FACE! Well, luckily its the underside of my chin way over next to my right ear. But still?! SO. GROSS. and totally ruining everything about my new adventure in Nantucket (which is totally awesome, btw). I know its pretty ridiculous to be bitching about this, especially because I AM on Nantucket and not a poor, starving child in Somalia. But this really, really sucks and makes me a)totally terrified to be outdoors and b)desperatly miss New York City where we didn't have silly things like plants to fuck everything up. According to About.com it could take as many as 20 days for the Iv to have its way with me. So far, its been 10, and that's counting the days before I saw it so it may actually just have been 7. Faaaaantastic.

I'm gonna go clean my grandma's house because I do not want to go out in public, because I hate everything.
Posted by Rachel at 8:57 PM No comments:

TWO THINGS:
1- this is a tmi post. On many levels. Just a heads up. Don't say I didn't warn you, foo'
2- if you had a hand in my chromosome I would appreciate it if you would stop reading right. Now. For all of our sanities. Thanks.

So, according to my mother, who is the foremost expert on poison ivy I could find without getting out of my chair, the ditty about The Iv (as I now call it, which sounds like the Hiv, but is way less traumatic and uh, not permanent) is "three days coming, three days with it, three days going," according to my astute college graduate calculations, that's nine days. Saying that I got it the day of my party, I have until the 12th or 13th with this crap, and as it stands now, it looks like it plans to be around for a bit longer than that. Anywhoodle, this time frame totally overlapped all my time in Maryland.

Enter A Boy. He is not The Boy. He just happens to be around a lot while I'm in Maryland and he's a decent enough human being for being raised in this god-forsaken hell hole of a town. We met socially on many occasions in high school and now that we've all grown up a little bit, things have shifted slightly into new territory. Sort of. When things look like they're about to start shifting, other things get in the way. Namely Annie. Who is neither sweet, nor nice and is also kind of a bone head. But she's my friend and I love her, when she's not ruining everything for me. So! Annie is in NYC. I am here. Boy is here. Things are gonna be delicious, no? No.

Because I look like Jeff Goldblume in The Fly. Not a joke people. I sat on my bed with my siblings and I was like, "can this happen?" and they both try to break it to me nicely, "hell no Rachel, you are disgusting."

Having zero self esteem on a normal day, it has managed to dip into negative double digits with this predicament. So I made up a believable but totally lame stall tactic, which will turn into me blowing him off and feeling really bad about it.

That's right ladies and gentlemen, I got cockblocked by Mother Nature.
Posted by Rachel at 11:54 PM No comments:

irony is an ugly, dirty whore

I graduated from college on June 1. On June 2, I was no longer a resident of the city of New York (well, Brooklyn, but whatever). On June 3 I celebrated my return to country-bumpkin Maryland life with a quaint, little, backyard graduation party. The party was delightful. A good 90% of my favorite people were around to help me eat delicious food and shower me with wonderful presents. I looked adorable. My hair was as straight and non-poofy as one can expect from Maryland humidity. Today is June 6. Every appendage (meaning both arms and legs and (very possibly) neck) I have is covered in poison ivy. I haven't had poison ivy since I was ten when I got it on my eyes (not pleasant, btw) at summer sleep-away camp. I am itchy, cracked out on benadryll and wondering if I made the biggest mistake ever when I left my nice, warm concrete jungle.
Posted by Rachel at 9:07 PM No comments: