You've seen this, right? I just want to make sure that everyone in the entire universe has seen this. Its too good to be missed through an internet hiccup.

What will be your Space Jam?
Posted by Rachel at 7:09 PM No comments:

We watched 11 hours of House of Cards on Sunday. Not by accident, but because that was what I wanted. Actually, I wanted to watch the whole gee-dee thing, but we both had early Monday mornings.  So we'll watch the last two episodes tonight.

I've listened to the Book of Mormon soundtrack no less than 10 times all the way through in the last four days. Its my cooking music, my writing music, my get all-your-shit-off-the-floor-let's-live-like-grown-ups music.

Last Monday, I was having a pity-me day and found X-Files on Netflix. And immediately watched 6 episodes in a row, despite the fact that I've seen them all and I quickly realized they were not as amazing as I remember, and I had started watching them on the kitchen TV but was too enthralled to move into the living room, so just sat on a dining room chair until my thighs were near-permanently marked with their wicker design.

I now read books by the gallon and an entire New Yorker in a single day.

When I was little (and by little I mean, between the ages of 3 and 16), I would watch movies and TV shows over and over and over again until someone (my Mom) told me to knock it the eff off. Which would mean it was time to go up to my room and pick up a book I had read no less than five times and read it all over again.

When I imbibe pop culture, I do it to excess. Since childhood, I've had this real strange compulsion to over dose on my favorite things. And strangely, after I've gotten my fill, my feelings about them don't change. I still love the book Wise Child, even though I've read it no less than 50 times. When Twister comes on I'll still sit down and watch it, despite the summer where I watched it twice a day for over a week.

I am trying to figure out why. Why I live like this. Instead of savoring Lost, I gulped it up in enormous up-all-night bites. While I have Netflix to blame for being my easy access to the good stuff, there is still a missing reason. How come I couldn't just watch a few episodes of Kevin Spacey being all priggish and Southern and then move onto something else? I let myself get drunk on Downton Abbey not just the first time, but any time I am left to my own devices for more than a day or so. Shouldn't I just want a sip now and a sip later?

I know I'm not the only one who is like this, in fact, the advent of this modern age of technology-fueled hedonism has only made more people just like me. But why? Why do we live like this? Is it because we're confident that something else just as good will come along soon enough, so no need to treasure this one? Is because we're afraid that someone might take this one away, so snatch it up before it goes? Is it because we're bored? Because our lives lack their own excitement?

While I continue to have some free time on my hands, I will ponder why we all take giant bites before we're done chewing what is already in our mouths. But first, I have a hot date to figure out whats going to happen in the last two episodes of House of Cards.

Posted by Rachel at 7:24 PM No comments:

Sometimes, when you're unemployed, you think up some brilliantly stupid ideas. 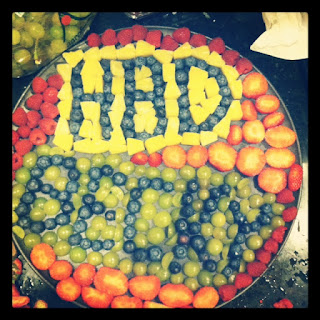 At Becky's birthday potluck, I put myself in charge of dessert. With one of our good friends up the spout and craving fruity goodness non-stop, I thought I shouldn't just make a fruit salad, I should make fruit art.

Some notes if you want to make your own fruit art:

Use the biggest cookie sheet you have. Letters take up way more room than you think. I used one that was 19" across - it might have made more sense to use a standard rectangular one, but it wasn't as aesthetically pleasing as the round one. Dumb, but pretty (just like me).

Use the smallest fruit you're working with to craft the letters - blueberries were so much easier to manipulate than the pineapple or the grapes. On a lighter colored cookie sheet/platter they would have stood out stunningly.

Blackberries/raspberries are a waste of time for anything except decoration, they fall apart too easily and are too hard to manipulate.

Cut stuff to make it work for you. I'm not sure why I insisted for most of the process to use fruit as it naturally appears, but once I started cutting grapes in half and quarters they filled the spaces exactly how I wanted them to and didn't roll around which made things so much easier.

Be patient. Its a frustrating process the first time you do it. Guess and check. Next time I want to use cantaloupe and other melons cubed as the borders around the letters. And I'll probably take a better picture before my friends destroyed it in the name of being hungry.

Posted by Rachel at 2:53 PM No comments:

I am in the midst of my first legit (paying) writing gig in years. The first writing job that isn't journalistic or completely self serving. And this is the first time that I am writing about things that I do not understand (business analytics. what the whuuuut?).

I am terrified. Terrified. I've never been this scared about failing at something that I always considered myself pretty dang good at doing.

I needed to take a break and write about myself for thirty seconds so I could feel the accomplishment of having words come easy, of knowing the definition of everything I am typing, of knowing I am saying the things I want to say.

I've never taken such a giant shot in the dark. Despite all my swagger, I am completely doubtful of my technical writing ability.

In other news: musicals are the best writing music, Dunkin's pumpkin spice coffee is no joke, and I now have a clementine tree growing in my belly.
Posted by Rachel at 9:20 AM No comments:

I talked about this girl a few months back in a TBIF. And now she has a fancy new blog and a dynamite giveaway. This blog is practically meaningless. Why wouldn't I use it to potentially score myself some sweet.sweet stuff? Guys, a cookbook? Etsy swag? You KNOW I love Etsy swag.

Kristen's blog is here. Read it. Oogle at her pictures. Give her a virtual belly rub.

So this is me entering her contest. If you go and you enter and you win. Ugh, I'll be so mad, but I'll still love you...but I'll be mad.
Posted by Rachel at 6:28 PM No comments:

Apparently, there's this thing in cooking called "cleaning as you go." 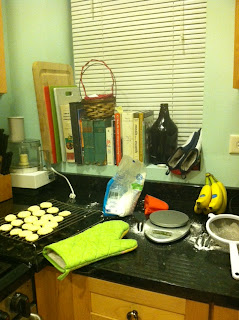 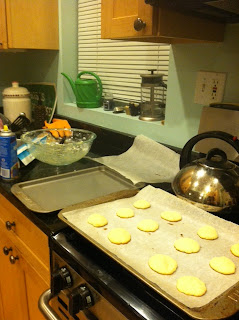 This is not a methodology I ascribe to, clearly.

In other news, the cookies I made were ah-maaaazing.
Posted by Rachel at 2:26 PM No comments: