I am announcing right now that this will probably be the penultimate novel marathon I do. Who knows how I will feel next year, but this year was pretty rough.

If you look at this handy graph that the lovely NaNoWriMo people provide: 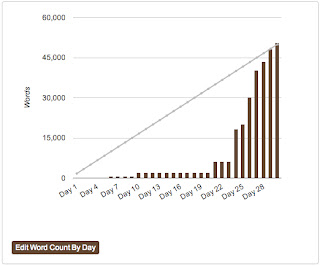 This was really more of a write a novel in about eight days (for the record, on day 23, I was at 6,000-ish words). Once again, it felt absolutely crazy, but completely normal to hammer out 10,000 words in a day.

I found myself writing best on the train before and after work, any time that might be spent playing on facebook was spent writing novel in the past week. I turned facebook, and pinterest, and gmail off on my computer so that I could focus. I wrote instead of going out to have fun with out of town guests, I wrote instead of getting any of the fun things done I wanted to get done. I wrote when all I wanted to do was go to sleep. And then, I was finished.

This year was hindered by the fact that I had no idea what I was going to write about for a long time. And then I decided what I was going to write about, and I realized very quickly that it was going to go nowhere. So instead I just changed, about four thousand words in, to make my book about something else. Then there was the fact that there was always something better to do. Something that needed to be done sooner, or something that was more interesting or something that stressed me out more. It was not until last weekend that I realized that Thanksgiving was not the second to the last weekend, but the LAST weekend of November and it was time to hustle. So I hustled. And now it is done.

Next year is ten years. That feels like a good stopping point. Ten years of unreadable novels feels like a good amount. They're stretched over three laptops (one of which does not exist any more, which may mean those novels are gone for good, quelle domage) and ten most different years of my life. Ten years ago was 2004, which was New York, and college, and whirlwind of having absolutely no idea what was going on in my life or anything else. This year's novel is kind of a tribute to that feeling and that year which feels quite appropriate for the second to last one.

Thanks go out to:

Dbudz for always believing in me, even when sometimes he was all, "you do not have to do this you know? You can just stop." But then when I said no, he was all, "okay, I will go make some tea."

Dbudz's family for also being fine with my Thanksgiving being spent on the computer for hours and hours at a time. Also, sorry I am not sorry for smoking all of you in Apples to Apples.

T-bone and her family for not batting an eye when I said, "yeah, I am not going out to dinner/a show/fun things with you, I have to sit at home and write my novel." T-bone does lose a point in the thanks column for introducing me to Scandal, which ate up an entire weekend of writing because sadly, I could not figure out a way to incorporate text messages consisting of "Ohmaaahgaaaah, what just happened, I am about to die." into my novel. It's okay T, I still got it done and Scandal is my most favorite. So its all just fine.

I shot out of bed this morning, wide-awake with anxiety at 5:15 a.m. A full hour and fifteen minutes before my alarm was set to go off.

For the longest time, I just lay there, letting the anxiety wash over me again and again until I thought it would explode out of my fingertips.

And then as if some sort of fairy godmother was whispering my in ear, I thought, "what am I panicking about?"

I was anxious about things that did not require the rapid heart rate, the sweaty palms, the near tears. I was anxious, because anxious - due to years and years of having too much to do and a huge helping of fear of failure - is my default position. Anxious is how I am.

While I wish I could say that this revelation made the anxiety magically disappear and I am reborn a calm and zen human being forever rational - that is not the case. The anxiety never left. It stayed as I lay there waiting for the alarm to go off. But somehow, the knowledge that the anxiety was unwarranted, helped make it okay. It was still bad, but Okay Bad.

It was as if instead of chasing off the demon, the good feelings just sat with the demon and they started working out a peace accord.

I don't know where this bold moment of clarity came from but I hope that by announcing it to the internet, someone else finds one as well.
Posted by Rachel at 5:53 PM 2 comments:

Charlotte was the perfect city to visit on the tail end of a week-long stay in Maryland, and right before we brought out the big guns: Las Vegas, the Grand Canyon, Seattle and the Treehouse.

We stayed with one of my longest-time friends C-sea, who has lived in North Cakalacky for almost 10 years. This is my first time getting down there, so clearly, I'm the worst friend.

She and her main squeeze, E (together they are known as Chellis) - own the cutest, pinkest house at the end of the lane. It was so fun to get to see how they are decorating - and since C-sea is a Pinterest queen - it's pretty amazing. She should probably blog about it.

We had two requests for this trip: good North Carolina BBQ and their favorite brunch. Otherwise we wanted to drink and sleep. This is not how this trip would have gone five years ago when it just would have been up in da club for 48 hours straight. But an old lady knows what she wants: good food and an early bedtime.

Chellis totally delivered in both departments. Our BBQ was courtesy of Mac's. Despite a flighty waitress and an inaccurate beer list, it was crazy delicious and far less biker-y than the exterior would have you think. It was an arm and a leg above most places in Chicago. And I'm always happy to have a choose-your-own-adventure BBQ sauce experience.

Brunch was courtesy of Heist. I normally am hesitant to jump into an all-you-can-eat buffet breakfast because I feel like its a quantity over quality disaster. Not.the.case. Everything was so amazing. Most amazing? The giant waffle that Danny topped with baked French toast?! What?! What?! In second place was the endless train of mimosas maxing out my daily intake of bubbles. Mmm. Bubbles.

We also snuck in a meal at Loco Lime because I was craving a margarita. It was Mexican food which is pretty much the same in Chicago and Charlotte.

In two days, we had three meals. And we were satisfied. That's how delicious and filling everything was. God bless the South.

Charlotte has a crazy brewery infestation - we let Chellis pick a couple favorites and ended up at Triple C and Birdsong. In a cage match, my money would be on Birdsong, but go to both and you can be the judge.

We ended our weekend at Whiskey Warehouse for more mimosas. Because I was lying before and there is no such thing as too many bubbles. They have a killer roof deck that would have been perfect except you can still smoke on bar patios in Charlotte, which truly was the only tick mark in the con column of this trip.

That's it. Food and drinks and playing catch up with some of my favorite friends- Chelsea, Ellis, and sleep. Thank you for a perfect lazy weekend.
Posted by Rachel at 9:10 PM No comments: 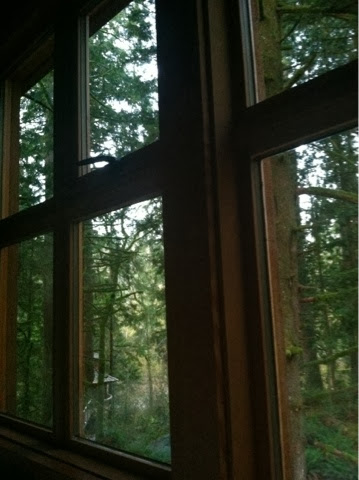 This is the view I woke up to this morning from my treehouse. The city girl in me will never die, but I could get used to this.

Deep down in my gut I have that sinking Monday morning feeling but right now I could not care less.

Posted by Rachel at 7:27 AM No comments:

It was a little ironic that this week I could only describe my mindset as Zombie.

Halloween passed with absolutely no fanfare beyond a caramel apple and cupcake. I almost forgot that after Halloween comes all the writing.

Last year, I did NaNoWriMo with nothing else on my plate. I was unemployed and had a schedule chock-full of free time. And I couldn't make myself write.

This year, I'm in the middle of wrapping up one event and planning two others - which involves a constant stream of words and numbers, and to add insult to I-can-never-say-no-to-work, I'm in the middle of a writing project that will last well into the month. Plus, we have four trips left to take, including tonight's to Seattle. And I haven't even told you jokers about Charlotte, Vegas or the gd Canyon I hung out in.

But I signed up. Because I always will.

So we'll see if no free time creates more writing time in one of those inexplicable equations of the universe.  Either way, I'm sorry for the radio silence. More blogs later...whenever that is...
Posted by Rachel at 6:28 PM No comments: