You're the pride and joy of Illinois... 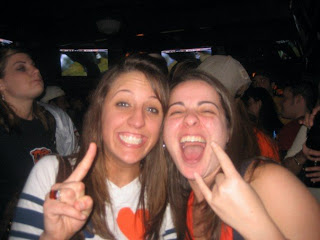 If you had asked me 3 months ago who played in the Superbowl last year, I probably wouldn't be able to tell you. If you had asked me to name 3 quarterbacks in the NFL, I would maybe be able to come up with two (psych. I'd be lucky if I could get one). If you had said to me last year at this time, "Rachel, in 365 days time you will really, deeply care about a football team to the point of making shirts and fighting with people about their chances come Superbowl Sunday." I probably would have told you to pass the crack pipe.

It hasn't slipped my attention (mostly because no one will really let it) that my current obsession with the pigskin is downright bizarre. My parents never cared much about the sport (I think mostly because they wouldn't be caught dead cheering for anything that a)came from Baltimore or b)was called the Redskins) and the last time (before this winter) I can remember watching a whole game start to finish was probably junior year of High School when I only did it because it was social suicide not to be seen at a football game--especially if some guy let you wear his jersey.

Sports to me have always been kind of boring, the exception that proves the rule to this is soccer. Watching soccer games has always been a passion in my family, but we're Italian, so that's kind of to be expected. But besides "real football" and girly stuff like ice skating and dancing, sports were always something I could take or leave-- but would really rather just leave and go to a play or something.

This changed sometime in November when Flopsy asked if I wanted to watch the Bears game with her. I said no, leaving out the fact that it had be a solid half-decade since I'd watched more than 16 seconds of a game. I relayed the conversation to A&K who explained that football is kind of a big deal in this town, not that they watched it, but it was. The next time Flopsy asked, I went along, mostly because at this point I had few-to-no friends and so any sort of social interaction was pounced upon by me.

I don't remember who played in the first game we watched, just that we were at Ditkas (I know, could I GET anymore cliche?) and it was probably the most fun I've ever had at a sports bar or perhaps on any Sunday morning.

*note: Why trying to turn people on to the game of football, it should probably be mentioned that watching football is an excellent excuse to get drunk on Sunday mornings, just incase you're looking for one. 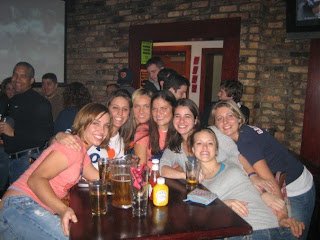 After that one game I was hooked. Kind of. I still didn't really understand the nuances of the game. So I did what I do whenever I get obsessed with anything: read as much as I possibly could (see?! I am a total bookworm-geek at heart, all this macho football stuff is just for show). I learned the names of the players, and what exactly a "down" was, useless Bears trivia -- pretty much anything the internet had to offer I ate up with a spoon. For about seventeen seconds one Monday Funday (an excuse to get drunk on Monday night: yet another reason football is the sport for me) I decided I wanted to be a Bears Cheerleader, only to discover they don't have cheerleaders. So I decided I'm going to bring them back...once I'm done, ya know, everything else I want to accomplish.

Is it possible that I wouldn't have gotten this hooked if the Bears didn't have an increadible season? Yeah, its possible. But I doubt it. The games they lost (which were few and far between) crushed my soul a little bit (most notably the one on New Years). And it isn't really the sport that I'm into as the feeling you get when watching it.


I've never lived in a place that was really all about football. When I was a kid, I didn't really care and then I went off to college, and New York just isn't a football town so I never got a chance to experience it the way I have here. The energy of Chicago is so addictive. Most of my favorite moments have been in a bar, watching a game. Even T-bone, who said she didn't give two poops about how the Bears did got caught up in the excitement of the game and when Gould (who will be getting his own blog later...trust me) kicked the field goal in overtime? She went nuts just like the rest of us.

I like that football gives me a sense of belonging here. On every street corner there is a sign or a guy wearing a hat that says "Go Bears." The Art Institute, the fuddy-duddiest joint in town is even going Bears crazy! I can't imagine Giants Helmets on the Lions out front of the NY Public Library. Even the Christian Book Store across the street from my office has a sign saying "Daaaa Bears" in the window. Like my boss said, "If Jesus is cheering for the Bears, the Colts might have a problem." Which lead to:
"If Jesus and the apostles were playing the Bears in the Superbowl, who would win?"
"Depends, is Jesus qb?" 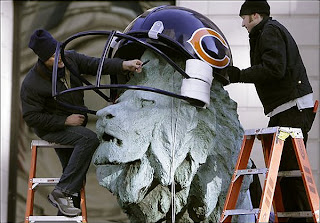 I love that knowing about The Bears and cheering for the Bears makes me feel closer to the people in this town that I'm really, quite quickly totally falling in love with.

Superbowl Sunday promises to be totally nuts. Of course I want The Bears to win, but even if they don't, there's next season!! We get to do this all over again! I could not be more excited.

So no, I can't really explain what came over me...

Perhaps it was the notion of something new and totally different to get excited about (we all need things to get excited about otherwise why get up in the morning?) or a way of bonding with complete strangers or a reason to drink at ungodly hours. Whatever the reason, I'm a Bears fan. I've learned the song and everything.
Posted by Rachel at 3:45 PM