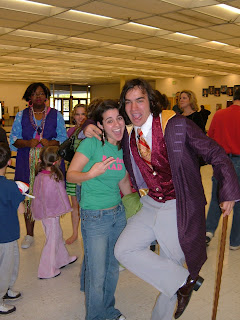 So, everyone has a favorite pair of jeans. They're the pair you buy, perhaps on a whim that you end up wearing three or four times a week until they literally decompose on your body. You stress out every time you wash them because it screws them up for like three days. Yeah, those pants. The day those pants die is a dark, dark day for everyone.

My jeans are from American Eagle. I bought them on a whim (isn't that always the way?) the day before I left for Nantucket the summer after my junior year of college. I then wore them every day for pretty much the next two years. They're the most perfect pair of jeans. Super comfortable and yet almost trendy enough to pull of wearing to a bar when you're just not feeling up to the tight, sexy jeans (uh, I guess I should have mentioned I wear jeans every day. No joke. I own -- seriously-- at least 20 pairs that I wear on a regular basis). Anyway, I got complimented on them pretty much every time I wore them and they looked good. I was a happy girl with a good looking ass.

Time passed and at one point a little hole began to form on the back right hand pocket. Right in the top inside corner. I still wore them a lot because I always have cute underwear on and I don't really have any shame Then something tragic, that I've managed to block from my memory, happened and the entire pocket started to rip off, right at the seam. I began to panic and rushed to my neighborhood American Eagle, naturally they had completely redone their denim section (STOP doing that! You're ruining lives, AE). The jeans did not exist anymore. I asked for a similar pair in their new denim line. The brain trust girl in the mini skirt was of no use to me so I went home and was sad. Then I had one of those minutes where I remember that there are people starving all over the world and some people have no pants at all.

So I decided to mend them. People, I am not a seamstress. In fact in the womanly arts I pretty much fail across the board. I can't cook or sew or clean or be submissive and docile...so me trying to mend denim was pretty laughable, but I did it. Then they got shoved to the back of my drawer for awhile because I thought they needed a rest (which they did), I got a new favorite pair (my first sevens) then another new favorite (probably my Polo Ralph Laurens-- although at this point I really like most of my jeans-- and I have three pairs waiting to be hemmed that will become favorites, I have no doubt).

So last week things at work went balls crazy and I found myself working late and (worse) worrying about work while I was doing the fun 20-something things that should be dominating my mental space. By the middle of this week, I had completely stopped caring about what I looked like at work, basically coming in and running around like a kid off her ritalin and then going home and passing out. I also hadn't done laundry in about three weeks. On Thursday morning, what did my comatose fingers find in the back of the drawer? The favorite jeans. I needed something to be happy about so I threw em on with a fairly long tee-shirt (as the corner hole was still fairly obvious-- though I was impressed with my pocket-seam hemming abilities.

Doodley-doo, off to work I went. The day was nothing short of ridiculous with the running around and the long stretches of time spent staring at a computer screen, trying not to cry. About mid-day I had my third potty break (I'm doing this new thing where I try to drink 2 quarts of water a day and that with the gallons of diet coke really run right through me) and I notice that the seams were starting to kind of stretch and the hole down the seam was getting a little bigger. I yanked down my shirt and went about my day.

At the end of my day (that was supposed to end at 5, but actually ended at 7) I go to the bathroom and once again look at my jeans/handy work. Either my butt grew three sizes that day or the running and the stress were apparently a match for my sewing because the hole was ENORMOUS. Like we're talking six inches, right across my rockin' ass. None of the guys in my office (now its me v. 5 guys all day every day-- its kind of the opposite of fun) mentioned anything about it, which was nice of them. Because seriously it was like every nightmare I had in high school, a giant hole and my green underroos (that ironically enough said Drama Club on them) sticking out for everyone to see.

I thanked my lucky stars that I had had the foresight to carry a messanger bag. I grabbed a men's tee-shirt that covered a little more of my heinie (although had my company's logo on it, which was pretty embarrassing the entire way home) and then I spent my walk to the train/home making sure that the messanger bag was artfully placed directly over the giant hole in my most favorite pants.

...Which I'm still not going to throw away. Nope. You can't make me. They're getting washed now, I'll figure out what to do with them when they're clean. A pair of denim, assless chaps perhaps?!
Posted by Rachel at 9:15 AM

don't worry...i have a pair of gap jeans that i LOVE: tall, make my ass look nice and could be worn ANYwhere. they also have a nice hole in the butt. frickafrack.

Mom makes me throw away my awesome pants with holes in them....makes me cry.