A Story in Pictures

Once Upon a Time a Girl in a Scarf and her sister went to a museum. 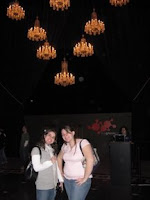 They explored the exhibits and found that most of them were pretty lame (in the Museum's defense, they didn't look very hard). And then they found the baby chick exhibit!! Their Mom thought it was hilarious that they wanted to spend all day watching baby chicks hatch because they grew up in a place that looks like this:

But they were in it to win it. And they noticed one egg that looked like it was getting ready to hatch! 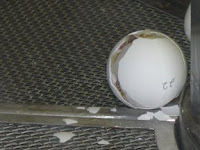 So they waited patiently as pieces of the shell began to chip away. Minutes passed and they couldn't believe how long it was taking. Their Mom voiced her annoyance that this is how they were spending their day but the Girl in the Scarf was not going anywhere. As the chick chipped away at the egg, the Girl in the Scarf looked at all of the information about the chick and learned that chicks have a special tooth that they use to get out of the egg and then it falls out after they're in the world.

Then the girl got philosophical, as she tends to do when she's waiting around for things to happen. Can you imagine having to work this hard to get out into the world? When humans are born its the mother that does all the work, but the chick is all alone and there is nothing to stop it from just giving up, from waiting until its so big that the egg just breaks around it. Of course, by that point the chick will probably have died from starvation but still... how hard it must be to not even know the world you're trying so desperately to become a part of. And then finally! The chick hatched!!! 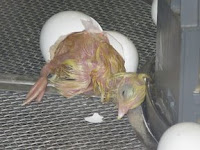 It was really, really ugly and scary looking, which, to be fair, we all kind of are when we come out of such a cramped place. The chick just lay there for awhile learning how to breath all this new oxygen it had suddenly come in contact with. The chick was so very tired, it had just cracked its own egg, it knew it had to, it knew that even though it didn't know our world that it wanted to be a part of it. The Girl in the Scarf pitied the little chick. It had worked so hard and now it had its whole life ahead of it, to keep working hard and surviving. The Girl in the Scarf watched it for awhile, as all of the other museum patrons jostled around her. The Girl in the Scarf was wondering if maybe now, she was just being born. She was ugly and unfortunate, but she had spent so long working so hard and was finally just beginning her life. 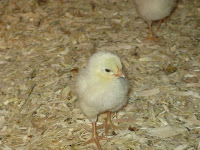