Okay - so, its a week late, but here's the lowdown on our very first Great Urban Race.

Boyfriend and I were there on time - early even, but didn't really want to drink a beer at the meet-up bar because the worst possible thing was to have to make a bathroom pit stop in the middle of the race.

One of the main flaws of GUR is the lack of chip timing. Because what it meant was that everyone was given an envelope of clues and then there was a mad rush for the door- had there been more people there could have been some serious injuries and we also saw at least one team make it out before the lady in charge said Go. But anyway - we opened the envelope of clues and just started running. We realized that the best bet was to just get on the Red Line and go downtown.

Once we got on the train platform (along with every other team) we waited for about 10 minutes for the train. In that 10 minutes we solved pretty much every clue that needed to be solved. Thanks to both of our internet-phones and our text-a-friend Little Brother. Once we got on the train we mapped out a route. Everything I had read about the race said that the most important part was to figure out which clue to skip to save yourself as much time as possible.

Boyfriend really wanted to skip the clue that told you to find someone in a tie-dyed shirt or Chuck Taylors. I was sure that that was going to be way easier than he thought, and sure enough - once we got off the train we (and a whole bunch of other teams) accosted this perfectly normal guy and asked to take a picture with him and his sneakers. He was very nice about it. 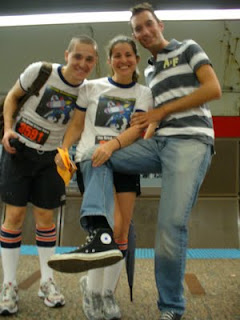 With that taken care of, we decided that if we couldn't find a job application or "Help Wanted" sign (harder than it would seem with this whole internet fad) before we finished all the downtown clues we would skip that and go find the clue that required us to do a relay race. Once we get off the train, we start with the clues that are furthest south.

We had to take a picture in front of Berghoff's restaurant with 8 other people doing the "Superstar" pose (never gets old, right?) I thought this was going to be impossible, as this is a pretty fanciest restaurant and normal people wandering around on a rainy Chicago Saturday aren't going to want to stop and pose like an idiot. Boyfriend realized that obviously there were going to be a lot of other teams down there too - so we should go and just take pictures with them. He was right. 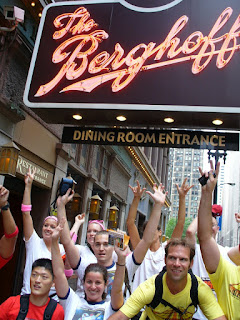 I can't believe they accepted this picture at the finish line because there aren't really 10 people in it. But its fine. Also, thus begins the pattern of looking terrible and out-of-focus in every picture. In our own defenses - it was rainy and humid and we were running everywhere.

After we did that we split up. Boyfriend counted the number of flags on a building and I went to Walgreens to buy a toy for a toy-drive for the charity GUR was partnering with. Right after we split up, I realized that I had no phone and only like $5 cash. If for any reason, we can't meet up, I am totally stranded.

I buy a matchbox car and magically, Boyfriend meets up right with me. We run towards the drop off place for the toys and get our picture taken with the mascot of the charity. 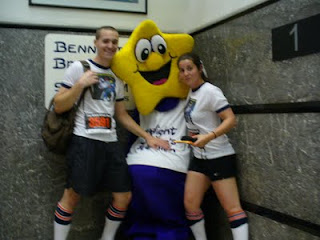 Then as we race towards the Art Institute to take our picture with one of the lions, I stop into the Patty Melt restaurant and lo-and-behold! They still do paper job applications. The guy who gives me the application tries to have a conversation with me about what they're looking for in employees and I'm like, "yeah, great..." and run out.

Then we have this nice girl (who apparently had been asked to do this many times by the time we got there) take our pictures in front of the Lion. We were holding up 7 fingers because that's how many flags there were in the window that Boyfriend had counted. 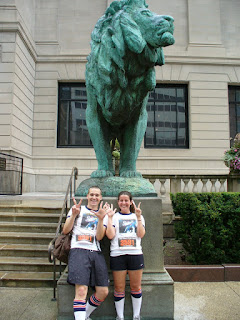 At this point we were done with downtown, so we went to get on the Brown Line to head back north. At this point we WAIT and WAIT for the train, which became quite the pattern. We end up talking to a few other teams. They all seem really serious about the race, so we think that we're probably doing okay. Finally the train comes and we take it up to Armitage. We get off with everyone else doing the race and head towards the Tin Man statue in Wizard of Oz park.

This also caused a problem, because I am a) disturbingly out of shape, b) not a runner, and c) had jacked up my achillies with my bike pedal the day before and so was having more trouble than normal running. This was the farthest we had to run and I did not do a good job. But eventually we got to the Tin Man and got our picture taken. 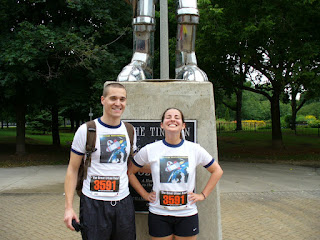 Then we got on a Lincoln Bus to make our way to Kingston Mines for a dance lesson. The bus driver was kind of an idiot and lets us off a few stops too early and so we run to Kingston Mines. Then (mine and boyfriend's favorite clue) we had to do a 5 minute salsa lesson. While I was really anxious to get going it was really fun to get to dance in an air-conditioned roon for a few minutes. It gave us a chance to relax and have fun before heading back down to Fullerton and Lincoln to get our picture taken eating a hot dog. This is possibly the creepiest picture ever, btw. 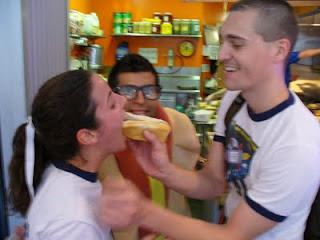 After taking that first bite, I then decide that this is the appropriate time to go ahead and put some mustard and ketsup on the dog and eat THE WHOLE THING. Horrible, horrible idea - because then what do we have to do (wait for it) RUN. While digesting Hot Dog. Gross.

We run to the Fullerton Brown Line and then finally realize what the hold up has been. Apparently in our whole evening of studying the night before, we forget to check to see how the CTA is going to be running the next day. The brown and red lines are running on a single track so we wait and wait and wait for a train. At one point I say that I'm going to stab someone in the heart loud and forcefully enough for a girl to look at me and walk the other direction.

FINALLY the train comes and we think that we're doing pretty well. We only have two clues left and then we have to head back to Cubby Bear. We pass Wellington and the train just.stops. Not at the station (oh, no, that would be WAY too convenient), just past the station so we can't get off of it, we just have to wait and wait and wait and get really really mad at the world, and then take it out on each other. FINALLY the train starts moving again and we get off at Belmont. I still maintain that it was faster to take the train than to try to walk/run 20 blocks in the disgusting humidity. Boyfriend is not sure, but we were waiting long enough that I think it's what knocked us out of finishing in the top 25.

We get off at Belmont and go to Comedy Sportz where we have to play a round of charades. I got the word "soup" and it took Boyfriend approximately 7 seconds to guess it (no joke, the group next to us was there when we got there, and there when we left).

We are happy to be making up time and run to the Tattoo shop on Belmont to put a temporary tattoo on Boyfriend's face. All the time we made up with the charades is lost in our inability to successfully apply the tattoo. Had we been patient enough to wait the 30 seconds the first time we would have been fine, but no dice. After 4 tries we manage to get it to work. 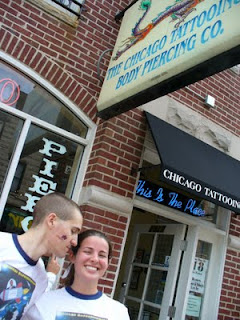 Then we're done except for one last clue. For this I would like to send a shout out to the Penn Laurel Girl Scout Council for teaching me the game Between Green Glass Doors. The one "riddle" question we had gotten, I had figured out in less than 30 seconds. So while we are waiting for the light to change we get a random girl to hang up the phone with her mom and take our picture with the Sheffield street sign in the back. 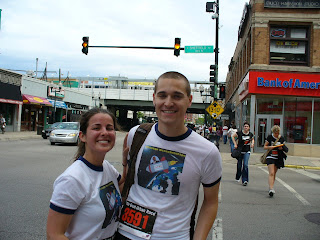 Then its a straight shot up to the Cubby Bear. By this point my foot is killing me and I am hot and sweaty and we've run about 4 miles. I had not at all prepared myself to run this much and am miserable. Unfortunately both teammates have to cross the finish line at the same time, so Boyfriend, very sweetly walks with me until we get to about Strange Cargo (that made our awesome Baracketship tee-shirts) and then we run. We run until we get across the finish line.

Then I pass out.

Not really, but I do feel like it would be a good choice. At least so I don't have to stand anymore. But we get up to one of the judge's stations and realize there aren't that many people around. One of the judge's checks off all our clues and tells us we're good to go.

At this point its 2:30 and we decide that we're going to sit around and wait for the awards ceremony. We have a plate of loaded tater tots (which were amazing) and a beer and we kind of hang out.

We stay for the awards and realize, sadly, that we hadn't made the top 25. Two days later we get the results and find out that we finished 43rd out of 480 teams (so in the top 50 AND top 10th percentile). We were also only 6 minutes behind the 25th team. We were on the brown line for at least 10 minutes, so we have decided that we can blame it on that.

All in all, it was AWESOME. Next year I am going to a- train. It was a lot more running that I could have ever imagined. And b- check the train schedule. It would have been so much faster to take buses most of the way. Also, had we taken a minute to read the clues before running we would have realized that there were 2 clues close to the bar and that it might have been faster to do those at the beginning instead of the end.

www.greaturbanrace.com
Posted by Rachel at 9:31 PM

I keep re-reading this for strategy. Charlotte's in 16 days, and while Liz gives us home court advantage, we're trying to win.

Sounds like you had good time. Don't forget to check us out next summer.