People, I have written this blog One Two Four and now FIVE times.

I have very little to be personally proud of in my life, everything I accomplish seems end up being a group effort with other people, but once a year I have the opportunity to tell myself, "Look, look what you can do! Its kind of useless, but you do it! Some people write dissertations or movie scripts, but you! you write unreadable novels. Wa-hoo! You go girl" And that is kind of awesome.

I say this every year and every year I totally mean it, this is getting harder and harder. I do not know quite what that says about my life but it is still totally true. If you look at this bar graph you will see how this almost did not happen. 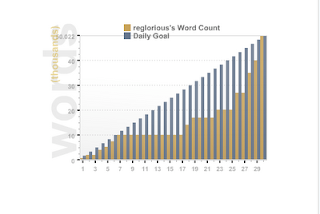 So you can see that seriously it was not until today that I was anywhere near my goal. Mostly because this year I (finally?!) have a job where I have to do work the WHOLE time I am working. At none of the jobs I have had in the past five years have I been required to actually give my 110%, this is kind of sad but also kind of awesome, until this month when I had to spend five days a week writing for a job and then had to go home and find the inspiration to write. It was a challenge (as you can see...).

This is why I will never haterate on any of my friends who have real jobs and try to do this. It is hard as shit and I'm only doing it because I am super, super stubborn.

I also realize that these become less like novels and more me just getting my writing demons out as much as I can in 30 days. This year's novel took place in about 24 hours. Less even. It takes place from 7:15 AM to 1 AM. I'm like friggin Jack Bauer over here. And really nothing happens? Well, okay the protagonist gets to Vermont, and goes to a Friendly's. She also goes to a bar and hollers at a governor, but really there is just a lot of sitting around and talking and introspection. A whole lotta introspection. Turns out a good mental diversion can eat up 2,000 or 3,000 words.

Even though over all the writing is fairly terrible there are some sentences that have a glimmer of potential and for a month of work, that's enough for me.

And of COURSE - my thanks go out to:

The boyfriend (and his family) for letting me spend most of the Thanksgiving weekend writing instead of being social and/or putting up Christmas lights. Also for the food. And I got wine AND a cookie tonight for celebration!

MB - for letting me bail on so much stuff these past few weeks and being perfectly cheerful when I tell her that I am not coming into work so I can write my novel, or I'm going to leave at noon so I can write my novel and for also for trying to win me street cred with the kids by telling them that I was writing the novel.

Pandora - Oh man, can I tell you, I have the girlest, most embarrassing personal Pandora station. It is all Glee, broadway musicals, Adele and Taylor Swift. No joke. So humiliating and yet apparently good for writing.

Dollop - I only went there once, but it is an awesome, and funky and inspiring and I can't wait to go there for real work.

Hazel - There is not a better writing kitten in the whole world, for reals people. She is so snuggly and warm and just wants you to succeed. Also she fights with tinsel and it is hilarious.

Courtney - for being there, forever and always. See you in a few weeks, C-bomb. I'll be the one with the Bears Santa hat on holding a sign saying "SOLID GOULD."

My goal is to actually post a real blog between now and next November. Also, to finish writing all the things that were due before November.
Posted by Rachel at 7:53 PM