A crazy story to make up for the lack of posts recently.

Last Christmas (I think), my baby sister, 'Bear gave me a friendship style bracelet in the colors of the Chicago Bears: 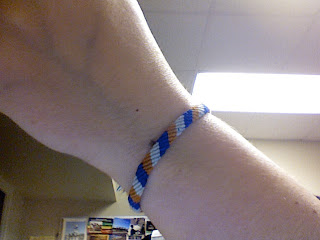 It lived in my jewelry box until the beginning of this football season when I put it on and vowed that I would wear it every day until the Bears won the Super Bowl (obviously this is not entirely accurate for a variety of reasons, but its a fun hyperbolic thing to say).

So I wear pretty much every day but I take it off to shower because there is something about wet embroidery floss that grosses me out.

On Saturday I had to be at work at 8 AM, which was already poor planning but add that to the fact that I did not get much sleep the night before and it was super snowy outside, I was running extra late, so I threw the bracelet in my bag and put it on on the bus.

I got to work, worked a whole day, went out a whole night, woke up the next morning went out and had a show, a rehearsal, a trip to costco and a Christmas tree excursion. At some point in the midst of all that I realized that my bracelet was gone.

I was super bummed, because while I do not expect the Bears to make the Super Bowl it was kind of nice to think that my bracelet had magic powers that was making them do so well. I figured the bracelet had fallen off at some point on Saturday and having been to about 10 different places and having taken my coat off at all of them I knew it was going to be quite impossible to track it down.

I resigned myself to the Bears not doing so well anymore (despite the win over Detroit) and went about devising a plan to tell my sister what had happened without feeling incredibly stupid and irresponsible.

On Monday morning after taking the company van to run an errand and bringing it back to park it, I had to brush some snow off of the ground to see if I was parked within the lines of the spot (our parking lot is never ever plowed which is particularly fun two or three days after a snow fall when everything is iced over) and low and behold what did I find??

My bracelet! It was right there on the little step up ledge next to the drivers seat completely frozen to the car. Here are some crazy things about this state of affairs:

1-I had not driven or even been near that car (or at least that part of the car) since 8 AM Saturday morning - over 48 hours before I found it.

2- That van traveled over 15 miles between the time I lost the bracelet and the time I found it. At least six or so of those miles were on the highway traveling well over 40 miles per hour.

3- The door handle on that door is broken (classy, I know) which means that I never use that door to get into the van, only out of...which means there are about three or four times I actually used that door AND

4- During none of those times was I taking a jacket or gloves on or off (the typical culprits of lost wrist accessories).

How I managed to lose this bracelet in just the right spot AND it managed to freeze there almost immediately, I do not know, but I do know that it is a sign...maybe. We'll see how the rest of the season goes - and if it it goes well than it it is totally a sign, if it doesn't go well, than it is probably just a bracelet.
Posted by Rachel at 7:58 PM