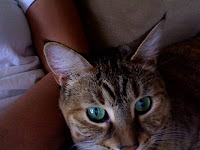 So, its my yearly finger marathon. I'm less excited this year than I've ever been. Probably because of my knowledge of my totally insane schedule. I don't really have time for grocery shopping or laundry so I'm not quite sure where I'm going to find time to write 50,000 words that I don't know yet.

I need to find a job. Desperately. Finding a job in the best of circumstances sucks, but at this moment in this economy it sucks even more. But the fact remains that I need one. And at this moment, I'm not willing to settle for something I don't really, really like. We'll see how long it takes for that to change (probably about two weeks...or until I have to pay rent while unemployed).

I'm not good with fear. Right now I'm totally scared of what's about to happen, and the one person who is here to listen, I don't really want to collapse in front of. The collapse is eminent. I just so want it to be when I'm alone, not trying to be adorable and fun.

So I started my NaNo, four days late, today. This is my fourth year, so this feels like Senioritis. I know it'll get done eventually (except, that I totally don't). The nicest part about starting was that out of nowhere my normally mean, distant, antisocial cat decided that she was here for moral support and put her head on my laptop to give me the strength the start (That's her picture with my photobooth, it didn't really work but she is super gorgeous).

Anyway, expect more updates to the blog, now that I have procrastinating to do. Also, the secret that I've been keeping for the past few months is now kind of out in the open. So I can talk about it. Sort of. Vaguely. Using pronouns and metaphors.

Watch this space. Its about to get wordy.

Also, its 5:30 on the East Coast, if you haven't voted yet you are done complaining for the next 4 years.
Posted by Rachel at 4:21 PM

Yay! I miss reading your blog. I'm happy to have you back.