I am having booze problems these days. I assume it has something to do with being older (and therefore lamer). The last few times I've been trying to get all cray-cray, I've just gotten really miserable and sick and its been the worst.

Last night was my chance to redeem myself at the annual Andersonville Bar Crawl. Its the best party of the year. It deserves a yelp review its so good. I didn't want to puss out before the big finale dance party. I kept reminding myself to pace myself and listen to myself and drink water...myself.

It was strange, to be listening to my body rather than just trusting that its been down this bumpy road before and knows how to come out on top.

At bar one, it was time for a Little Sumpin' Sumpin' (no more Miller Lite over here folks, we're grown-ups), I drank. I kissed and hug all the friends, who if I don't see them once a week, it feels like I haven't seen them in foreeeeever. I saw people from the past. Stories were told. More beer please. I asked my friend to explain to me what his rap lyric, "Louie on my booty" meant (answer: he doesn't really know). More Beer. I'll show you a little sumpin, sumpin.

By bar two, those beers had kicked. in. So. I did what I was supposed to do. I drank water. I still felt a little sick. I drank more water. I ate pizza. I felt sick. I cursed the gods who made getting older a thing. Talked about feelings. More water. Maybe its the water making me drunk. Sick. Pizza. Pizza. Water.

At the third bar of the night, I felt ready to drink again. I ordered prosecco. Dumb choice? Maybe, but it came in this adorable little quarter bottle. I like small versions of big things. 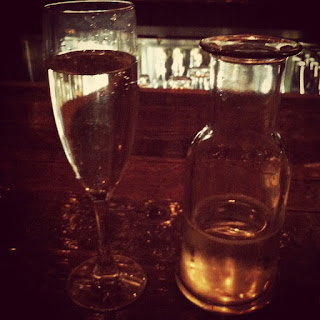 Drink Prosecco. Wish aloud that I could get some orange juice up in this piece. Little bottle! Wax poetic on all things East Coast (typical). Prosecco. Mmm. Bubbles. Bravery followed by immediate cowardice. Declaration that my friend Laura's nickname was los tostadas. Clapping and demanding attention.

I knew that the clapping meant we were in trouble, so at the final bar (the dance party) it was water. Water. Whitney Houston. My favorite girls. a troublesome strapless shirt. This being my jam. Water. Not quite enough air in the room. Fog. Miley Cyrus. Water. Dancing in a circle. Knowing all the words. Being a little embarrassed  Not giving a fuuuuu. Carly Rae. Water. Stage time. More water. Spilling the water everywhere. Giving up on water. Dance party. Dance party. Dance Party. Whoops, its only couples left? Peace out.

This morning I woke up to no voice and a sizable hangover for what amounted to four drinks in seven hours. This from a girl who used to drink Miller Lite by the gallon and then take a fifteen minute nap before working for seven hours. Its a strange adjustment to be making - this whole not drinking until it comes out my pores - but a good one I am sure. Anything to make sure the dance party doesn't stop.