A pickle bowl - the Target sagas.

Guys. I've talked about Target before, but seriously?! This is a problem. 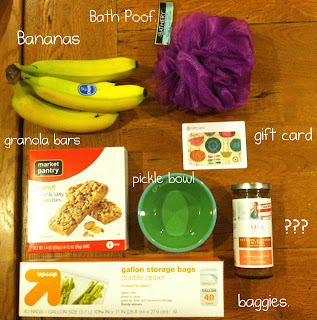 I went to Target with the express purpose of getting a gift card. One gift card, go directly the lady at the cash register - do not pass the dollar deal bins, do not collect an assortment of crap. Well, clearly, this did not go as planned. Here is what I came away with:

Bananas - okay. This is something we need. We're only home for 4 days this week, so we aren't buying actual groceries, but I discovered this morning that without a banana, I am fairly useless until lunch time.

Bath Poof - again, somewhat necessary. My current one is about to become just a big old pile of unconstrained netting. And were that to happen in the midst of a morning shower, the day would be pretty much over before the sun came up.

Granola Bars - clearly, I was starving. After a weekend in New Orleans, a day of my normal "let's lose weight without working out," diet was not cutting it. By the time I got to target I was about 2000 calories in the red and I got panicky. Like there might be some sort of cataclysmic event before I could get home to my lean cuisine and I would need rations.

Baggies - all the baggies were on clearance. Why? Who knows? Is it because they all have holes in them or are full of toxic off gases? Don't care. I will buy those off-brand-red-stickered baggies and I will put left over potato salad in them because I am an American.

Pickle Bowl - guys, its no secret that I love pickles more than most human beings. And I like to serve them to guests and I don't want to take the chance that I'll put out an offering of delicious pickles and people won't know what they are or something terrible like that. Thank the Little Baby Jesus that someone at Target had the common sense to make a bowl that said pickles so that when I put pickles in it my dumbass compatriots will be like, "oh, pickles?! wuuuuurd."

??? - I literally have no idea what is in this jar. It had a pretty brown-haired lady on it, and a red sticker so it was a done deal the minute I cruised by it. I'm not sure what I am supposed to pour this into or on top of or if I'm just supposed to shoot it with a salsa chaser. I guess we'll find out. Or we'll put it in the pantry and move it into four different apartments before we just put it on eggs. Anything goes on eggs.

Okay, but seriously, stop letting me go to Target.
Posted by Rachel at 10:00 AM