A decade of talking about feelings

Ten years ago, today, I was already up to my chin in what would be an absolutely life changing summer. I am known to throw around the hyperbole pretty loosey-goosey over here, but as I look back on my development into human-hood, the summer of 2004 stands out as a 1-UP-mushroom game changer for life.

It comes down to having the opportunity to invent myself. I had never really had the chance to be new anywhere where people cared. The person I was in high school was just a slightly taller version of the neurotic, precocious asshole third grader I had been, despite the fact that I now had boobs and a quickly developing dry wit. No one cared if I had become a better human, they all knew me and had written me off (except for my friends. You four are the best).

In New York, I had time to perfect the version of myself that I had been cultivating. But I was also busy cultivating keeping our electricity on and learning how to be a functioning roommate instead of a slobby asshole. The summer of 2004 was where all the practice of being a person paid off. I was not the best version but I was finally, a version of me that I liked more than any of the other previous iterations.  It was nice.

Also, let's be real, it was a summer of hedonism. Booze, pasta, lack of pants.  I subsisted off of alcohol and whatever other people would feed me, with the occasional peanut butter sandwich. I lived in a room with a girl who I delighted in despising. She was a fine person, but it was more fun to hate her and make drama (though, with that in mind, we got along great for two people who shared a 10'x4' cell that was only ever 100 degrees F). And it was a summer of shitty things too. Some not-nice things happened. There were so many tears, and not-nice words. But even those moments are tucked away with, "I am happy these happened, they made me a better version of me."

I learned that life should be lived, if for nothing else, "just for the story." Most of my favorite, best, oft-retold stories are from those brief and shining months free from responsibility and left to make choices that felt right in the moment. So I almost drove a car into a house, and made my friend do a shot of cooking oil, and poured hot wax on another friend's chest by accident.

I lived with people that, somehow, to this very day are in my top 10 of favorite people. I also lived with people who I have never seen since, and that is just as awesome. They came into my life for this one shining moment, with their kittens and their Mormonism and their ginger boyfriends.

It would have been totally different if I went to actual college, if I had four years of what I got all in one summer. I probably would not hold this summer up on quite such a large and sparkley pedestal, but I feel like I almost prefer it that way (which is good because our time machine is in the shop).

Since the end of May, I have been thinking about this post, and these memories. I have been reliving it with some of the cast of characters but mostly alone, enjoying reflecting on a time that feels so far away, and yet, not that long ago. I also am grateful/wistful/thoughtful that this all happened before facebook was even a twinkle in our eye. So the only picture I could find online of it is this one. 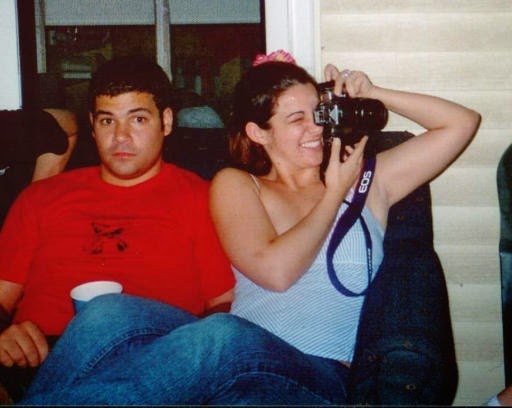 Which is pretty perfect (despite the fact that my shirt looks really weird). I am fairly sure I had no idea how that camera worked. It is only because of this turd nugget of a magnificent human being this even happened. Stupid Mikey Pits putting ideas in my head and instigating dumb shit like this.

While it is only in retrospect, I am always and forever (ie- never), tryna hang out.
Posted by Rachel at 10:09 PM