So yesterday was Mardi Gras - and so in celebration I saw 101 Dalmations on "Broadway" (or what passes for Broadway out here in the Windy City - so Randolph St...not quite the same ring). It was...disappointing except for the puppies. And the idea was kind of cool, but didn't work... don't see it. Let me describe it to you in detail and you'll enjoy it more, especially if you give me a puppy to play with.

And I also decided that for Lent this year I will be giving up Facebook. Which is a very intense decision for me. I spend a really absurd amount of time stalking friends, and old classmates, and occasionally strangers. This is probably unhealthy (and yet, totally accepted). So I decided that I was going to give it up. Its only 40 days right? And I used to give up TV. I am hardcore during this Lentent (?) period.

Of course I am immediatly sad because I won't be able to post pictures of my upcoming trip, new apartment or even of dumb every day things like my just in time cakes yesterday night (I had forgotten to eat pancakes - thankfully I live in a house where we freeze leftover pancakes).

And then today AnnieBelle demands I become lifepartners with her blog and I oblige (its easier if you just say yes). And in doing that we made a wager...if you will...we are each going to post in our blogs EVERY DAY for the next month. This will keep me occupied until March 17...which is St. Patty's Day! So at the end we get to drink! Horray! Perfect! Stupendous!

My other goal is to take at least one or two pictures a day. I don't take enough. So, I'll post pictures from the day before...maybe it will inspire me to write? 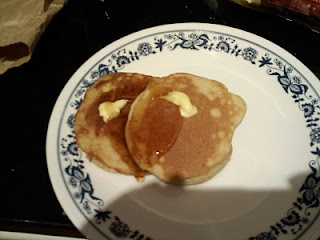