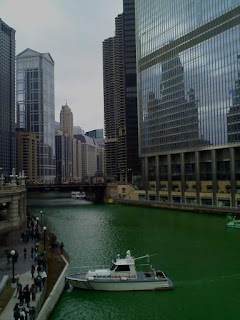 I had this fear, possibly somewhat irrational but not totally unfounded, that in two or three years (or six or seven) that when I move away from Chicago I will suddenly realize that I had never seen the river dyed green for St. Patrick's Day.  Its one of those things that are kind of touristy, and yet I feel - an important part of Chicago tradition.

The rich culture of tradition is one of my favorite things about Chicago.  And some traditions are stupid and annoying, but they never fail to make me feel like a part of something.  And its the dumb songs, and the inside jokes and the nonsense that I love so much. 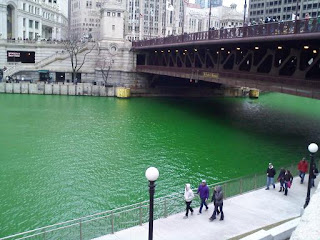 I have been told that the true amazing thing is to watch the river actually get dyed (as opposed to just seeing it all green) but that was not something that worked with my schedule this morning - so this will do for now.  I wish I had brought a real camera.  I also wish that downtown Chicago was not the epicenter of inebriated girls wearing too-little clothing, if only because it makes me feel very, very old.  Also, I don't like stepping on/near vomit (also, its NOON, learn to pace yourself). 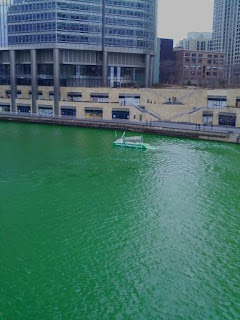 Friday night, over too many drinks, I wondered out loud to a few of the friends I was with - if with the new Mayor coming in - the green dye budget was going to be cut.  And they assured me that people, many who would never bother to vote would be Up in Arms if their river did not get dyed.  They don't care who is in charge - they just want their more-green-than-normal.
Posted by Rachel at 11:19 PM