For our first on-a-plane adventure, we decided to cross timezones and spend some time soaking up all the Vitamin D our bodies had been missing during this dreary Chicago Winter. 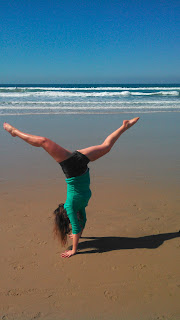 San Diego is Guh-or-geous. We got off the plane and I was already ready to move in. Sure, I'll live in your crappy airport, just gimme all your sunshine.

The weather was in the 50's-60's all weekend with overflowing buckets of sunshine, and people kept apologizing for this! Nearly everyone we talked to was all, "sorry its so cold. I wish you guys got better weather this weekend." Meanwhile, boyfriend and I are walking around with our tongues to the sky trying to catch sunbeams. Sure it was a little cold for shorts, but I got myself a nice bit of color and so forgave everyone for the necessity of long sleeves.

Our hotel (priceline that 'ish, y'all) was right on the Bay and since we only had about 36 hours we decided that that's where we would spend most of our time. Sometimes you want to see all of a city, sometimes you realize that its better to enjoy what is right in front of you, especially in a place that is so easy to walk around in. This meant we had a very touristy weekend, but sometimes (hipsters, I'm talking to you here) being a tourist is Just. Fine. 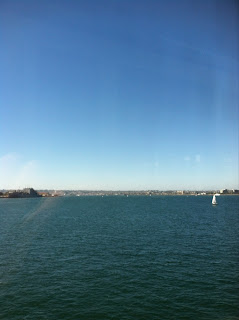 Where we ate:
Top of the Market - ugh, so touristy. But we were starving and craving super delicious seafood for lunch on the first day. Swordfish tacos? Awesome. Atlantic Rock Crab Club? Kind of paled in comparison to the tacos. But not bad. Bonus Points? We were right on the bay and we got to watch old men in canoes fishing while we ate.

Spike Africa - We were super indecisive about where to eat dinner on Friday night and so walked in huuuuge circles, all over the Gaslamp district and into Little Italy before ending up here. I had the Ahi Mango Poke appetizer as my meal and it. was. perfect. Easily my favorite thing I ate the whole trip. With the Red's Strawberry Sail as my boozy side piece, I was the happiest camper. Boyfriend got the Island Pork Rib Plate (I'm not sure why) and was a little disappointed, but ordering ribs in a seafood joint seems like it would be a disappointing choice. So no pity over here.

Mission Beach Coffee Break - They had acai bowls. It wasn't nearly as good as the one we had with Maimees in Hawaii. But it was an acceptable silver medal acai bowl, enjoyed with our feet in the sand. 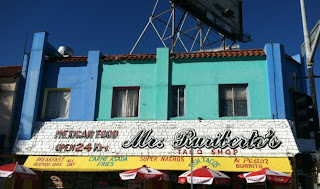 Roberto's Taco Shop - Six years ago, Boyfriend had a drunken burrito from this joint and has been dreaming about it ever since. We made that dream a reality, sober this time, which may have been a mistake. A California burrito is serious business. Some beer to line your stomach before the grease and fat train comes to town would not be the worst idea. So delicious and yet, much like jager shots and McDonalds cheeseburgers, something my body can no longer handle in excess.

Sally's Seafood on the Water - We were not super hungry after the dumptruck of burrito, but we needed something. Sally's had overpriced sushi. We ordered two rolls. They were so delicious. We were full and happy.

Cafe 222 - It's pretty hard to screw up brunch. And Cafe 222 held up their end of the deal by serving us eggs and carbs in a timely and delicious fashion. Just a warning: their website is obnoxious. Its almost bad enough to make me take away an imaginary star. 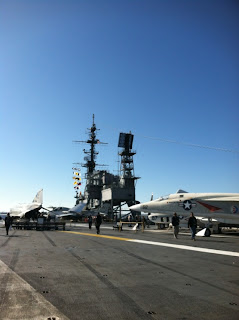 What we did:
The USS Midway Museum - So. Bad. Ass. Give yourself so many hours here (like >5), because even if you consider yourself disinterested in military history (me), you will be drawn to all the how-life-was intricacies of this place. Go up in the island. And all the way down to the engine rooms. Then think about how you walked around for five hours non.stop and still didn't see the whole thing. Wonder how something this enormous manages to float in water. Give the concepts of buoyancy and density some high-fives.

Mission Beach - We picked it because of its proximity to the requisite burrito stand. It was a little cold (and we a little didn't have towels) for beach sitting, but there was a grassy spot with palm trees that was perfect for reading and digesting said burritos.

Seaport Village - What a vortex of time wasting. I'm cool with being touristy but this was one step away from a fanny pack. 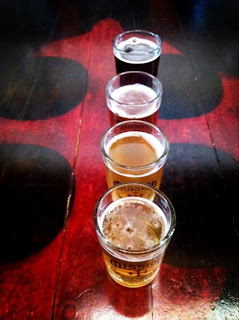 Mission Brewery - We did the beer-then-burrito thing a little backwards which made me feel pretty wretched. The beer was super good and the building was airy and wonderful. Even though my poor little stomach was about to explode.

Took public transit - The fastest way to my heart is an easy to use public transit system. The light rail and the buses were efficient and cheap and got us to exactly where we needed to go. Bonus points? We got to eavesdrop on some guy put out a hit on someone while on the bus. We felt dangerous, but safe.

Despite some crazy-expensive food and getting hosed in the hotel room department (no balcony?! weak), it was the perfect escape-from-Chicago-winter weekend. AND, it was my first time on the west coast! Ever (with the exception of some extended airport layovers)! Which means we got to fly over big Rocky Mountains and crazy flat Nevada! The East Coast will always be my number one boo, but I am diggin' on the rest of this fine land pretty hard these days.

Thanks! This is probably the only time in my life I'll do a better handstand than you (thanks Bebe!). ;-)

hahaha, nice! but you will always have better grammar than me. i realized i needed a comma in that previous comment!