TYOE: A Saturday in Milwaukee

2013 will be The Year of Exploration or TYOE.

For Christmas, Boyfriend gifted me the gift of adventure within the continental United States (just like on Double Dare!). Due to the absurd amount of flying for work he did last year, he earned enough miles to get me a Companion Pass on Southwest Airlines. And while many airlines would make you give up all your hard-earned miles for such a fancy piece of plastic, they let him keep the miles and the girlfriend-in-tow. So this year will be all about exploring as many of the places Southwest flies as we possibly can. The Year of Exploration (*trumpet noise*)

Well, our first adventure did not even require a plane ticket, just some gloves and a full tank of gas.

Boyfriend has been talking about this Spy Restaurant in Milwaukee forevvvvver, and we got the braintrust-y idea that we should go explore it in the middle of February when Milwaukee was a balmy 16 degrees ABOVE freezing.

I've discovered that when Boyfriend and I travel, we focus most of our energy on eating and drinking and walking around. We'll wander into a museum every now and then but we love food, we love booze and we love walking around burning off all those delicious, delicious calories. Are there awesome museums in Milwaukee (and the other cities we will visit)? Absolutely. Will we visit them? Meh. Maybe. We'll see.

The day started at Trocadero for brunch. We picked it for its proximity to the Lakefront Brewery - and in that regard, its awesome. We were told we had to have a Milwaukee Bloody Mary. I don't know how The Frenchie compares to other Bloodys (since I don't drink them on the regulars, being a mimosa girl myself), but it was spicy and delightful. The beer chaser felt unnecessary but I mean, when in Wisconsin... The food was fine, but I feel like its pretty hard to foul up brunch. The service wasn't great, but since we were only walking across the river to get to our next destination, we weren't in too much of a rush. 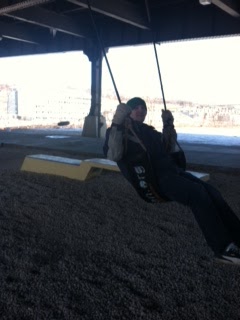 Then! After brunch, we discovered that the Holton Street bridge has both a convenient pedestrian walkway AND a sweet teeny-tiny little playground. Full of brunch and a little tipsy, in 16 degree weather, is not quite picture-perfect swinging weather, but we gave it a shot.


We mulled over which brewery to go to (Lakefront vs. Milwaukee Brewing Company) and ended up at Lakefront because that is where Facebook told us to go. It was a great experience, but now we want to try out Milwaukee for comparison's sake.

By 11 AM we had both had about 1.5 beers and were feeling AWESOME. Day drinking is the BEST, winter, summer, don't care. I like my beer while the sun is shining. The tour was fine, the beer was good (although we were disappointed in the lack of variety in the brew pub) and we walked out with two complimentary pint glasses (just what every household needs more of - pint glasses).

Three beers in and feeling buzzed to the max, we meandered down the riverfront path. I bet in the summer it is super gorgeous and full of fun things, but I have to say, with a snowy river and literally NO ONE around, it was kind of perfect. 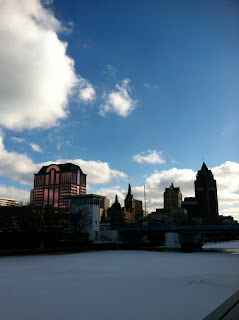 We made it to the spy restaurant (with a quick stop at the statue of the Fonz which is sort of meaningless to me as I have not ever seen a single second of "Happy Days." But I love a good photo op).

The spy restaurant at 4 PM lacked a little of the required ambiance. It needs some darkness and to be less full of screaming children. But we had some fried cheese curds and ice cream (Lunch of (drunk) Champions) and a fancy martini and explored all the fun spy bits. If you really want a Super Spy Experience, get your ass to the Spy Museum in Washington DC and do the Spy training thing. I know its expensive but it is WORTH it for the James Bond power trip.

We made it down to the Public Market which eeeeeveryone said we had to visit. Not knowing what it was, I was up for it. Until I realized it was just a giant, uber-trendy Whole Foods. 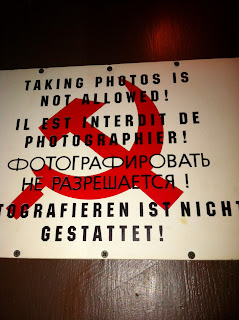 Had we not just stuffed ourselves with sweet, sweet cheese we may have been amped for artisanal pickles and fresh halibut but it was just noisy and smelled funny so we left to find some non-food third ward adventures.

We found an amazing antique shop (in the same building as Paintball Dave's) and spend an hour or so convincing ourselves that we did not need a whole bunch of garbage (despite how bad we might have wanted it).

By that point, buzz worn off and cold starting to seep in, we made the choice to be done with Milwaukee. Was there more to see? Sure. But going to a museum at 5 PM is dumb and we live close enough to find comfort in the fact that it will always be there, hanging out, waiting for another day of drunken stumbles. 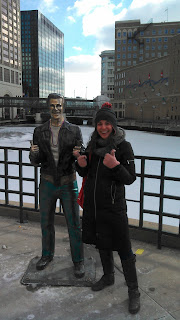