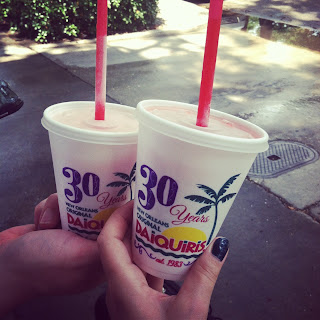 All of my previous New Orleans experiences involved my numba one stunna T-Bone. She drove me around, introduced me to all the best food and people, didn't get to mad when I straight up stole said peoples' mardi gras beads in a drunken, kleptomania-fit.

Boyfriend and I have spent a lot of time sharing cities with each other this year. Except mostly, he's been sharing the cities of his childhood vacations with me - and now it was my turn to do some sharing. The problem was, I had had so much fun (read: to drink) and T had been such an amazing hostess, I could barely remember where things were or what they were called.

Luckily, she was able to drop the perfect amount of knowledge for a quick weekend trip.

If you're going to go to New Orleans and not have a car, you either have to resign yourself to many expensive cab rides, looooong trips on the trolley (and buses), tons of walking, or just staying right where you are (wherever that might be, which is probably the french quarter). Our trip included all of the above. We probably would have done a ton more walking, but late June in New Orleans is decidedly not walking weather.

Actually, to be totally honest, June in New Orleans is kind of miserable all around. I'm sure its better than August in New Orleans, but we spent most of the time feeling dizzy - unable to imbibe liquids in the quantity that we were sweating them out. I knew what the weather would be like going in, but it is made much worse by the lack of car. You find yourself outdoors much more often when you have to wait for cabs and buses. Lesson learned.

We did have fun. And we did exactly what we said we were going to - which was eat, drink, and relax without feeling the need to do anything.

Walked around the important cemetary. For about 30 seconds. The dead were probably sweating too, and we didn't want to be around when their sweat mixed with our sweat and they reanimated. 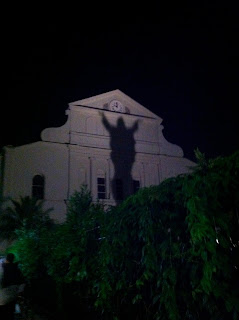 The Nola Brewing Company all-you-can-drink-shit-show. I don't know if that's what they call it, but that is what it was. And as it happened immediately after Commander's Palace, we were a hot mess. What Nola Brewing Company Beer lacks in interesting flavor profiles it more than makes up for in giving out as much as you can drink in souvenier pint glasses.

A ghost tour. Boyfriend's one request. It was later in the evening, once the sun had set, which made it delightfully psydo-spooky and was a much cooler option than a mid-day tour of anything.

Sat by the pool. Mariott, your pool deck in New Orleans is gross. I will still sit there because I cannot resist a pool deck, dirty towels and empty beer cans be damed.

Walked around the French Quarter. Of course we did. We're tourists. We had fun buying art and trinkets but found ourselves quickly out of things to look at. You need about 2 hours to explore enough of the french quarter to feel satiated. Any more than that and you're wasting time. 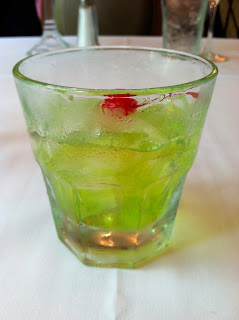 Commanders Palace. Three martini lunch for.the.win. If you go to Commander's Palace for dinner you are doing it wrong.

Felix's. Our sweet friend Sunshine said it was one of her favorite places and it was still open at 11 p.m. and not too far from our hotel. They probably were not the best po'boys in the city, but they were exactly what we needed, which was fried food and mayonaise.

Ruby Slipper. We were in a bad way our first morning there, and Ruby Slipper made eggs, served them to us, and made us happy. It was not a game-changing brunch but it was pretty freaking amazing. And, for as close as it was to the french quarter, not too touristy (at least, I don't think so, I was hurting pretty bad and not up to my usual quota of people watching).

Central Grocery. Touristy? Sorry. I am Not Sorry. I would eat a muffaleta from here every day if I could get away with it. Gimme all your olive tapenade. Now. 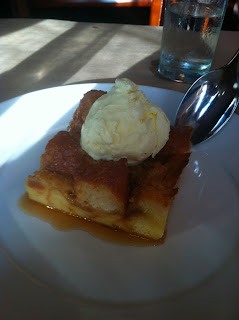 Boucherie. TBone took me here the last time I visited her and I was itching to go back. We messed up on getting a reservation and terrified that they might not seat us, I made Boyfriend get there half an hour early to make sure we were the first people in the door. He was not happy about this, because it required us standing outside with no greater purpose than looking pathetic so we would be allowed in to eat. Consider it worth it. We tried to eat outside our comfort zone, which was fun and delicious. But really, the reason for the season was the Krispy Kreme Bread Pudding. I wanted six orders for me. And then I wanted to eat the rest of Boyfriend's order.

Cochon Butcher. We got these sandwiches and then walked around in the hot, hot nola sun for another three hours before we ate them and they were still crazy delicious. I can only imagine how amazing they would be if they didn't have to swelter before being eaten.

New Orleans Original Daquiris. Okay, not food, but so delicious and untouristy. Worth venturing beyond the french quarter if you are feeling so bold.

Creole Creamery. Dear New Orleans: it should not take a trolley, a bus and a 10 minute walk to find some ice cream. Seriously, you are a million degrees at 9:30 at night. There should be ice cream on every street corner. Work on this. That being said - if this is going to be your only ice cream, way to knock it out of the park. A perfect cold good-bye to a hot, hot weekend. 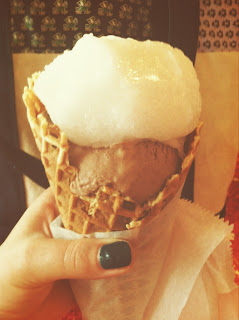 That Ruby Slipper is no bueno. The one in Mid-City - the original - is where it's at. And I'd kill a man for some red velvet ice cream from Creole Creamery right now.