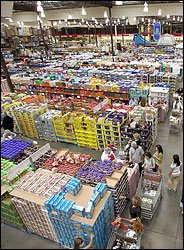 I'm back in New York finally. I missed it while I was down South but now that I'm here, the thought I keep having is, "Oh man, now I have to buy/do/make my own toilet paper/laundry/food." V. depressing after 3 weeks at home which (I realized today) is the longest I've spent in Middletown since I left for college almost 4 years ago. Crazy, I know. But I did get a miraculous send off. Mom needed tires so she decided to join CostCo, also known as the special people club. Here's the thing about me and most things involved with suburban living, including bulk shopping: I am so increadibly intrigued by this alternate form of living I become giddy like a three year old with an inch worm. We got our fancy membership cards with our increadibly horrendous pictures on them and my mom turned me lose in the store. People who don't live in suburbia may not understand the idea of Costco. In Costco it is virtually impossible to buy one of anything. They live the idea of, "why buy one when you can buy six or seven hundred bags of chex mix/bic pens/pounds of tomatos?" Can I tell you? I did a dance. No joke. I was so excited by the fact that I bought a double-sized box of Cinnamon Toast Crunch for the price of a regular sized box in New York City that I danced up and down the aisle until my Mom threatened to take me home with out my cereal and my 16 Dole Cups of Mixed Fruit. And as if it couldn't get any better, if I hadn't already been embarrassing my family name enough, they had exactly ONE copy of The Third Season of West Wing for cheaper than Amazon was going to ship it to my post office box in three to four days. Cheaper + Instant Gratification= Tru Luv 4Eva with this kid.

Sadly, Brooklyn does not appear to believe in the magic of bulk buying but aparently Queens does (I knew there had to be something redeeming about that particular borough), so Roommate and I have planned a journey out in a quest for a 5 pound tub of cookie dough and 86 fun sized bags of Combos for when we're having a bad night.
Posted by Rachel at 5:16 PM