Bad TV is my friend when I don't have a job

So I went into Express on Friday because I hadn't been in there in a while and I was in a "I should buy something for me because who else will" kind of mood and I saw this: 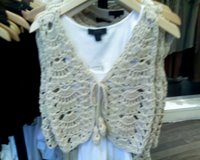 There is only ONE person in the whole entire world who can get away with wearing a crochet vest. And that is Leslie Burke from "Saved By the Bell: The College Years" (who isn't photographed on the internet anywhere) and she could only do it because it was the early 90's and she was supposed to be WASP-y.

In my desperate search for a picture of Leslie Burke (who has a real name but doesn't have enough cred for me to use it and for anyone to know who she is) I stumbled upon the imdb site for the original Mighty Morphin Power Rangers (and by stumbled upon I mean I put it in the search box because this morning in my semi-comatose state I ended up watching the first episode and laughing (on the inside, it was pretty early)) because there was a point in my life where I loved that show at about the same level I love the Housewives at (its not quite the weekly event as Grey's but its still to be celebrated). Any-WAY while noodling around seeing if anyone but Amy Jo Johnson had managed to parlay that pile of Japanese Recycled Poop into any sort of career and aparently the answer is a resounding "No!" and then I found out that the Yellow Ranger (and how fucked up is it that they made the Asian chick the Yellow Ranger?) died in 2001. Sad because I'm sure that in her obit it pretty much said, "The Asian chick who was on Power Rangers for one season died today."

In other news. Greys Anatomy (which is good tv, in case there was some confusion). I'm not gonna go into too much detail but the whole thing with George and Meredith?! Why nine times out of ten I don't tell people how I actually feel because no good is going to come from that pile of sex-mess. Also, while some of my friends are dirty Merediths and others are poor Georges, I think I've figured out that I'm a pre-doer Izzie. I would love to be a post-doer Izzie, but thats gonna take some time, mostly because I didn't have a bomb scare to jump start it. Also, I love Shonda Rhimes's post in the Writer's Blog to all the internet crazies who thought that maybe HotKyle hadn't died. It basically says "Stop being so weird and crazy, he's totally dead.

And the crochet vest.
Posted by Rachel at 4:02 AM

You and I had already discussed most of this stuff (except the yellow power ranger) and this entry STILL made me laugh.

You know what that means?