It has come to my attention that I am terrible at putting up pictures on this business. While words are nice - I feel like pictures take the game up a notch. Also, I have 8,800 pictures on my computer which means that every time I open iphoto everything comes to a screeching halt for 4 or 5 minutes as it loads. Its time to share the wealth.

My first word/photo essay is entitled "Photos of me with famous people." 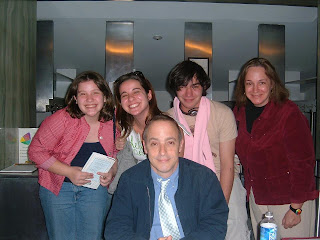 This is one of my favorite pictures of all time. Its framed next to my bed, which if Mr. Sedaris ever knew would either delight him or terrify the shit out of him. Its one of the only pictures of us all together as either my Mom or I tend to be behind the camera, but some nice lady took this for us. Apparently David Sedaris doesn't like to have his picture taken so this is a pretty rare find. He looks so content? confused? angry? I have no idea - we almost look photoshopped behind him- which would kind of brilliant of him - to sell this image and you can just put your own family behind him. Also we all look very young in this picture - it is about five years old, but those are 5 clutch face-changing years. 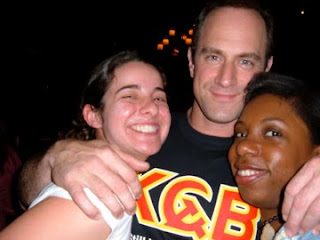 What is super unfortunate is I look like a pile of awkward garbage in this picture. This was poor planning on my part. This picture never should have happened. I had an English class and wasn't feeling well. But Miss D said two little words - Christopher Meloni. And I was there. With my pigtails and my raggedy tee-shirt and my make up - oh wait no, not so much that last one. This night was also the night that brings you this little number... 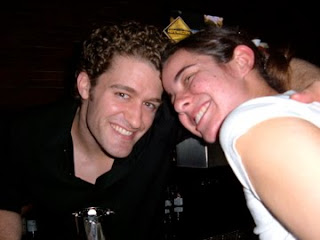 Back when this picture was taken four long years ago - I was a senior in college, young and full of dreams and bad skin and the ability to understand the physics of how to take a good picture. And this guy was just finishing a show called Light on the Piazza which I had loved in that way that you are pretty sure you should love something but are mostly just distracted that the lead male is supposed to be Italian and does not even resemble a pasta noodle he is so un-Italian looking. Anyway - at this point I was madly in love with him, having seen the show and since he wasn't actually a celebrity yet - he was incredibly nice and chatty. And now he's all famous and I still kind of look that weird, but am better at being pictures (sort of). 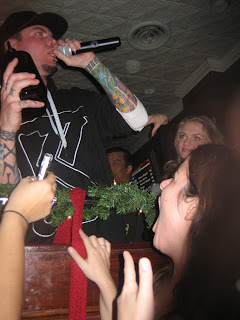 Okay - this picture almost doesn't count for a few reasons - 1) Vanilla Ice isn't really a celebrity any more, and 2) you can't actually see my face, just my enormous cobra-esque mouth that has the capacity to swallow you hole. The fact that I went to a bar just to see Vanilla Ice shows just how desperate I was for human interaction when I moved here. The fact that my coworker invited me out - I would have probably gone and seen MC Hammer (actually - that's 100% true - I would go see MC Hammer by myself). 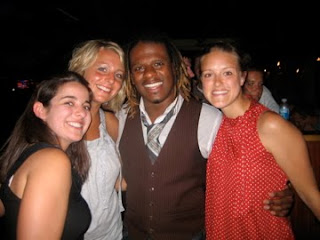 Again - why must I look atrocious in every celebrity picture? This is going to really hurt down the road...when we get to later pictures. Ryan Shaw doesn't really count because he did not blow up like Matthew Morrison. Bummer - but we like him anyway.

And then next three all happened in one day too - you can tell because I'm wearing the same clothes. Also - I look *almost* okay 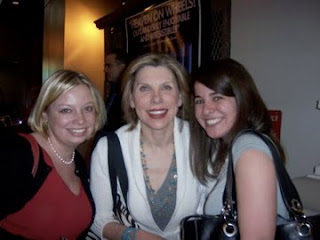 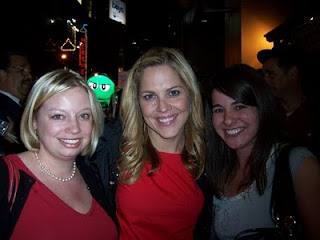 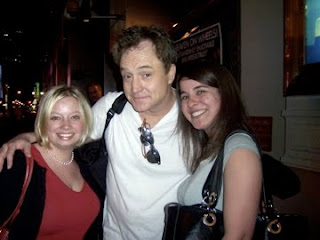 McKim looks gorgeous in these pictures - she is flipping radiant. I look like I need some sun, and may or may not have to pee. I get so excited when I meet celebrities I care about (...or I just make terrible faces) that I forget how to look like a normal person. But its nice to have pictures to remind me of meeting a bunch of strangers.
Posted by Rachel at 8:25 PM

Of course I'm radiant- I'm next to Bradley Whitford!

Also, you know I have that pic framed in my room, right?