No thank you, Mr. Roboto

So, part of my job is to facilitate the acquiring of visas for international trainees. This is an incredibly tedious process that I am 100% learning as I go. So far I am 3 for 3 for visa procurement (one was for one of our students going abroad). So I feel good about it. Its really awesome to give these young folks (one of whom is my age) an opportunity to come here, train with us and allow us to get our cultural-exchange jam on.

Also awesome? I get presents!! Both of the trainees have brought me very beautiful things that I refuse to share - but some stuff, namely food, has been made for sharing.

Our Argentinian friend brought us dulce de leche sauce that we put on everything and could never quite figure out if we should keep it in the fridge or out (the instructions were in Spanish).

Our newest trainee comes from Japan. And she brought us a Japanese smorgasbord of treats. We've been enjoying them for weeks now and they're about to be gone - so I took pictures to remember them by and I have reviews (having tried them all) in case you ever find yourself forced to eat Japanese snacks - at least you can have a heads up. 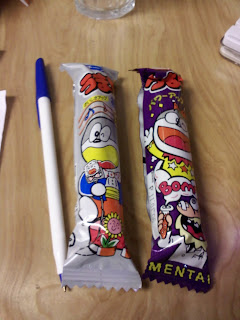 These guys are basically giant cheese doodles. Same consistency and almost the same taste. Apparently there are two different flavors but I really only got "cheese" from them. They taste fine but take about 20 minutes to chew and once you're done it feels like you have been rubbing your tongue on sandpaper. 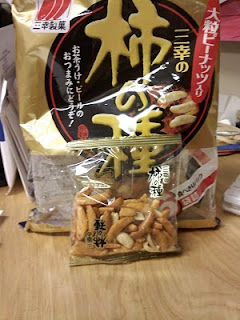 When I was little, and we would go to my Great-Grandmother's house in Connecticut, during cocktail hour she would have these little white bowls full of unrecognizable crunchy bits. This stuff is almost an exact replica of what I remember that tasting like. Its most people's (in the office) favorite...but to me it just tastes like a not-quite-right memory. Again - its the aftertaste that gets me, like I've been gnawing on the head of a hammer. 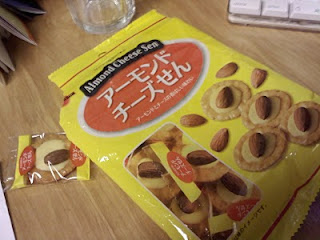 These are my favorite. I think this is one of the first times that a food has looked identical to how it looks on the front of the package. The cracker (or sen, if you're using context clues) has this not-quite-natural shimmer, like a light layer of mod-podge or shellac had been applied before the cheese and the almond. They had the most mild aftertaste (kind of like chewing notebook paper). The cheese is quite good - though it does not taste like any other cheese I have ever experienced. 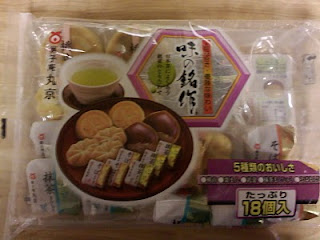 This was the last package we opened for the very simple reason that we had no idea what was inside. They looked like cookies but if you poked them (scientifically) they felt like they might be gummy in consistency. Also you're supposed to eat them with a bowl of green liquid (tea? soup? urine? who knows...). Curiosity finally got the better of us and we opened it up. 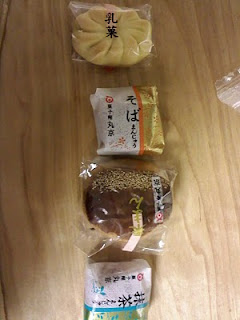 There are actually two different varieties of the item at the top. One is a more round version but they are essentially the same thing. I took of the top one and expected it to have the consistency of a gummy but the taste of a cookie. Instead it had the consistency of a very dry crumbly biscuit and the taste of sugary baking powder. However, it wasn't terrible. So I went ahead and tried the chocolate variety. This one scared my boss the most because it had little dots on the top and she equates unidentified dots on Japanese food to automatically be fish eggs. Which, I feel, is valid for someone who is A- a vegetarian and B- not particularly accustomed to eating Japanese food.

I had a bite of it and it had the same consistency as the first one with added dash of chocolate saran wrap. It was all well and good until about a minute after I stopped chewing, because that is when, out of nowhere - a fish crawled into my mouth and DIED. Seriously - there is no word for the disgusting essence that radiated off of my tongue and permeated to each nook and cranny of my mouth. I drank an entire bottle of water before remembering (duh) fish LOVE water and it only made it worse, so then I had a piece of good ole American (Trader Joe's) dark chocolate with almonds.

And yet - to this day (that was Tuesday) there is still something not quite right about my mouth. I've managed to solider through and the flank steak and peanut-butter-chocolate pie I ate last night did wonders...but I refuse to try the two other options as I don't even know what to make of them, everything else, except the giant cheese doodles, came in a clear wrapper which leads me to believe that these things are hiding something.

- I hope this blog did not offend anyone, I am not saying that these foods are gross or inedible. I am just describing my experiences (and opinions) about them. I leave you to find your own Japanese trainee and draw your own conclusions.
Posted by Rachel at 2:26 PM