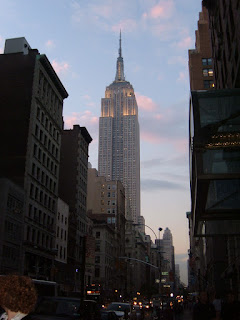 I recently had a very nice boy purchase a ticket for each of us to fly to New York City next month to celebrate the fact that I'm a year older. Even though it doesn't really matter because the next few years are kind of a hazy blur of attempting to get your crap together before you turn the big three-oh.

I am over the moon to be spending a significant amount of time in my favorite place. Last Christmas, C-Sea and I spent exactly 24 hours with Annie-Belle, walking around, shopping, and being cold. We also saw some of my most favorite people, ate some food and just enjoyed being in New York, which - I could do for hours. I could just enjoy New York for days. And so I plan to.

Here is a list of a few of the things I really want to do.

Please note - some of them may seem super touristy and there is a very good reason for that. Boyfriend has Never been to New York (he says he has, I say that everyone knows a layover in the airport doesn't count). So there are some things that you just can't skip (despite the fact that I will probably kind of want to).

New High Line Park on 8th Ave
Delicious BBQ from Brother Jimmy's
A huge, amazing Jackson Hole burger
Fat, Black Pussycat for a mind eraser and some cartoon network
Juniors Cheesecake (from Actual Juniors)
Central Park mostly the statue of the characters from Alice in Wonderland
The new playground at the South Street Seaport
Hot and Crusty for breakfast, or a solid midday snack
The Statue of Liberty, preferably the cheapest way possible (Staten Island Ferry)
A walk across the Brooklyn Bridge
Times Square for the very briefest of seconds.
A visit to my first apartment (and college)
some playtime in AnnieBelle's hood (its adorable despite its lack of proximity to anything)
Belgian Bar for some pomme frites and a classy beer
A bacon egg and cheese sammich from a street vendor
Dylan's Candy Bar (mmm. clodhoppers)
A 4 AM slice of New York pizza
Chelsea Market (mostly for a fatwich brownie)
And possibly, if we're feeling super classy - an Opera

Its slightly embarrassing that a vast majority of this list is food-related. But at least there is some activity in there to burn off the calories. And naturally I want to see some of the tens of people who still live in New York who remind me of when I was nineteen and dumb and full of confusion and promise. And I cannot wait to introduce Boyfriend to the place that shaped me and helped me grow and start on that journey to figure myself out - which I think is a lovely thing to revisit the week before my birthday.

I think you should go to that funky amazing place in Brooklyn for brunch. Wish I could remember its name.

I am 16 and am a big time NYC lover. I will probably too be 19 and dumb roaming around the big city hoping to hit it big in something. Hope it brought no regrets.

No regrets living in New York - just confidence that I could probably tackle any problem life handed me. Its a pretty good place to figure yourself out.