Book 8 - The Perks of Being Wallflower

Before you start with me, No, I have never read this book before.  Never.  Is that crazy?  Some people think its totally crazy - apparently its a staple of many pre-adolescences.  I some how coasted over it, probably because I spent most of those formative years reading as much Margaret Atwood as humanly possible (and just as much time pretending like I understood it).

Anyway, I can cross it off the list, I've now read Perks of Being a Wallflower. 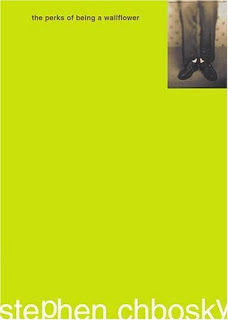 So when I was lacking a book for my train ride home I picked it up off the bookshelf in the tutoring room at work.  Thinking that a whole bunch of people have it listed as one of their favorites on the Facebook.  It was worth a shot.

I read the first 10 or 15 pages on the way home and then abandoned it for a current New Yorker.  I was not getting the big whoop as of yet.  Then on Sunday night, after hearing my friend rave about it - I decided to give it another go.

Sunday night bath is one of my most favorite new traditions.  Its not quite an every week thing, but it happens enough to be more than just a passing fad.  I took Wallflower with me and started back up and read straight through from page 12 or whatever - until the very end.  It took an hour and a half or so (I take pretty warm baths so I'm not running the risk of catching hypothermia or anything) and when it was over I was prune-y and thoughtful.

I thought it was good, to be sure but I am not quite sure why all my friends think its so amazing.  Without giving too much away, it bills itself as being a book about a typical high school experience but uh - its not.  There are parts of it that (I hope) are anything but typical.

I related with Charlie to be sure, especially there were a few lines that just echoed in my head, knocking around like unfamiliar memories, I wasn't sure how he had known exactly how I felt.

This all came to a screeching halt with the final reveal which made me reevaluate everything I thought before.  Am I really like this character who I am realizing, is so not like me?!  Yikes, Stripes.

Also, the fact that Charlie was a boy.  As with any book written about adolescents, I want to hear the same story but if it was a girl - how does that change his/her feelings and actions.  I don't know why - perhaps femenocentricism is to blame, but, Lord of the Flies, A Separate Peace...what it would be like if they were about girls? (I can tell you one thing - probably a lot fewer people would have died).  These are the things I think about when I am reading.

Anyway - if you're a teenager and you're very angsty, you should probably read this book.  If you are a grown up and want to feel nostalgic about how amazing high school was then, I hate you and everything you stand for - and you probably will feel like you empathize with this book.  If you feel like high school is best left in the past and don't need anything else to bring you down in this world of sadness - read Harry Potter, because its about angsty kids, but there's Magic!