I need some serious, serious help.

The love of my early 20's, Hazel Buena has reacquired a habit that needs to get gone. 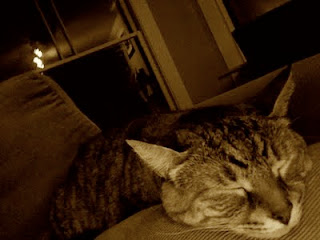 She has always incredibly vocal in her emotions.  Whether it be love or hate, she really needs to share it with you in that incredibly insistent and yet, totally unintelligible way that cats have.

I'm not going to say she picked up this habit from her adoptive mother, Luna, but they were a pair of noisy felines. Once Luna left for Texas, Hazel continued the ruckus in honor of her bestie moving out.

When Hazel and I moved out of the Brothel of Chaste-ness she traded in the meowing for peeing on everything, which was, despite my boneheaded claims a few months prior, actually way worse than the never ending chatter.

She gave up the peeing, and the crying to a certain degree eventually and in apartment v. 2.1 she was almost quiet, though she did really get a kick out of scratching at the bedroom door at 5:40 on a Sunday morning.

But since the move to the land of Hipster- she has become a vision of her younger, far too vocal self.  It happens sometimes in the morning, but mostly at night in those clutch few hours when humans are wanting absolutely nothing more than to be asleep. 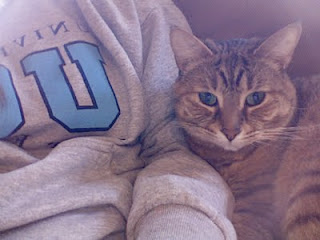 Taking 20 or so minutes to wear her out and eff with her brain with the laser pointer helps occasionally (I am writing this post with one hand, the other is controlling the most elusive and unpredictable prey that a feline has ever come in contact with) but with about as much regularity as standing in front of her and saying, "Shut up, Hazel," in a stern voice.

I need something, short of cutting out her vocal cords with tweezers and a butter knife, that will make all the meowing go away.  The bacon-eating animal lover inside me thinks that water bottle spraying is very cruel, although I've been changing my tune these past few months.

It doesn't really work though because you spray her (and since its night and you want to keep yourself as semi-comatose as possible, you don't turn on any lights and so miss the cat entirely about 65% of the time) and then she just tilts her head with a look of consternation and then meows, "why would you spray me?  That's not very nice," (or something to that affect).  Then shakes off the damp and meows some more.

So, besides the spray bottle and Grey's Anatomy, Animal Planet style --any suggestions?? 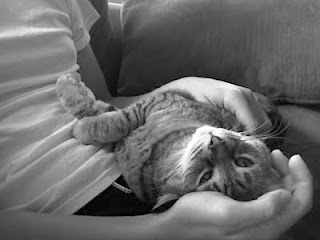 I think it comes in phases. Amelia was meowing a bundle awhile back, right after I moved her into my place, but now she only does it when I feed her sometimes.