My wonderful Mother came for a visit a few weeks ago and deposited the first (of what I am sure will be many) piles of childhood in my apartment.

I understand, she needs to get the ish out of her house and now that I am a full fledged grown up (who now has some room to spare ... too soon??) its time I took on the burden.  Boyfriend already had to do it  and he's like ages and ages (6 months) younger than me AND the youngest in his family, which means his parents are contractually obligated to love him more than my parents love me.

Unlike Boyfriend, who had boxes full of toys and awards and odds and ends - the theme of mine is: boxes of words.

There were some photos, a few fur coats (awesome, and practical but yet - not?  We'll discuss this in a later blog) but everything else was words.  Most of my notebooks from college, play bills and programs, phrases I had cut out of magazines (in that way that girls do that should be weird and creepy but since the letters are pink and sparkly...isn't) but mostly letters and cards. 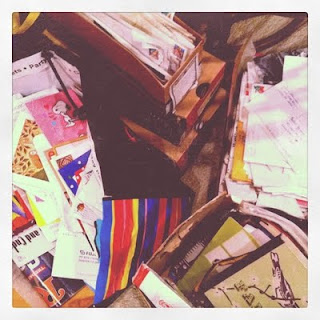 Back in my youth, I was an avid letter writer.  This was of course in the age before e-mails when a letter was really the only way to get information from one human to another (except for maybe the telephone...) - and I had a lot to say (about, if memory serves me correctly, nothing at all) so I wrote lots of letters.

I had the good fortune of knowing some really lovely people who were willing to write back and so there were exchanges that stretched years and all that remains of most of them is all the letters that were written to me and that are now sitting in a mess on the floor in my bedroom.

I am at a loss for what to do with these letters.  Most of them I would not actually miss if they were to disappear.  There are not any specific words that mean more than others.  There are some pieces of paper that are prettier and some with pop culture references (one friend of mine had a serious thing for Hanson) that are more delightful but most of the information shared, is not really information that I will need going forward in life.

But there is something that has kept me from throwing them out these past two weeks they have sat in a really impractical pile.  Maybe, nostalgia?  I've taken the opportunity during teeth brushing and avoiding house cleaning to sit in the midst of them and pull them randomly out of envelopes to read - and its been fun, but more than fun - its been really, really strange.

Its a weird sensation to be reading words that were either inspired by, or were inspiring words that I had written...and to have no idea what my words are.  Its like listening to someone who is talking on the phone and only hearing their words...but knowing that you are the person on the other end.

I've spent some minutes pondering what 10 year-old, or 14 year-old or 18 year-old me said.  Sometimes I  know exactly what it was but a lot of the time I am at a complete loss about how I would react to questions about boys or school or well, boys mostly.  Younger me was as clueless about boys as older me.  Its a little disconcerting to not have any clue how I thought about things.

Most people don't probably take the time to think about how they thought about things in the past.  And why would you?  We're a forward thinking species.  But to be aware of just how much you change in 10 or 15 years is kind of crazy.

I want an opportunity to read through all the letters and officially say goodbye to all those relationships.  I might even use it as an opportunity to get into contact with some of these people (many of whom I have not talked to for years) and see where life, after all these letters had lead them.  And say goodbye to this last relic of life before e-mail and future phones and always knowing what we've been thinking.

The notebooks from college will stay, but the sparkly cut out letters will go, because at this age, they are totally weird.
Posted by Rachel at 8:08 AM