Since we had tested our luck on the windy, gravely, guardrail-less roads of Iceland and survived, we figured it was time for S.S. Big Britches (which is what we dubbed ourselves while sleep deprived and terrified on the roads of the Western Fjords) to set sail on the actual frickin' Arctic Ocean.

Of course, fate and flat tires meant that this happened on the worst weather day we experienced.  Bad weather on land is magnified dramatically on the ocean as it not only pelts you without any true protection, and makes it feel as though you are sailing in a giant martini shaker.

The boat we were sailing on was advertised as being tres nordic and vintage-y which was cool, except that it meant that it lacked any of those things they have developed to make the boat ride less miserable.

So we set out with some super classy looking foul-weather gear. 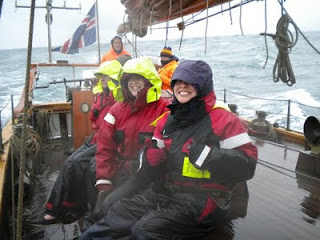 I think one of my most favorite things overall about Iceland was all the sweet costumes we got to wear.  The History Museum set the bar pretty high, but the whale watching totally delivered.

The first hour and a half was basically torture.  The puffin island was kind of a bust, since it was raining so hard and we weren't close enough to get good pictures with a short lens.  And then we just rocked back and forth.  The nice Icelandic boat people were perfectly pleasant but failed to mention that the side of the boat (starboard) we were on was the most rocky, dangerous thing EVER.  And that if we just moved to the port side everything would be less miserable.

After telling the Captain and tour guide to take us home NOW they promised that something was going to happen.  Really Soon.  Were they talking out of their butts?  Probably, but they delivered spectacularly.

First there was a blue whale spouting.  Something I think I am always seeing on Nantucket, but actually is totally different than I was anticipating.  And then a pod of dolphins just swimmin'.  And THEN there was a humpback whale and her BABY.  The baby, we were told was actually a toddler, but toddler whale does not sound nearly as adorable.  So it was a humpback and her baby.  How many pictures did I take of this most amazing spectacle?

Nope.  I had a realization while I was flying across the bow and nearly careening overboard to get a closer look - that this was an experience was one just for me.  And I would happily write about it, but that I wasn't going to waste time trying to take pictures.  I was just going to enjoy the fact that I was there. And I did.  It was awesome. 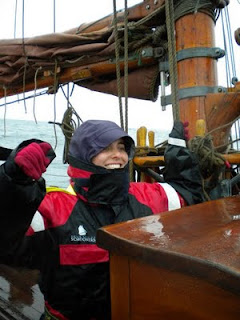 This is my whale face.
Then Musar vom-bombed over the side of the boat, we got some hot chocolate with Captain Morgan in it (a delightful treat that I am excited to recreate come winter-time), and agreed the torture was worth the pay off.

Once we were back on dry land it was time for a short nap and a trip to Lake Myvatn.  You should read all about Lake Myvatn.  It is quite possibly the coolest place on the planet.  How better to see the amazing lava fields than on the back of a freaking horse? 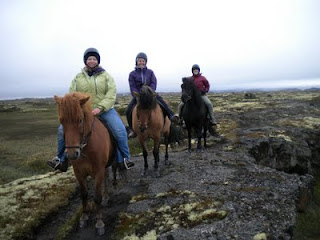 No way.  There is no way better.  Even in the pouring rain.  Even though my horse had a penchant for taking the most uneven, unstable path set before him.  It was perfect.  The last time I was on a horse was when I was in fourth grade at girl scout camp, but apparently, I have not lost my touch.  I walked, I trotted, I tolt-ed.

Then we hiked through spectacular lava formations and talked about how amazing life is, as one does. 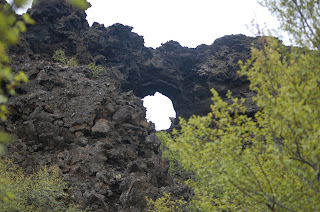 Whales and horses in one day?  What could make things better?

The next day, our first stop was Dettifoss, which is the most powerful waterfall in Europe. 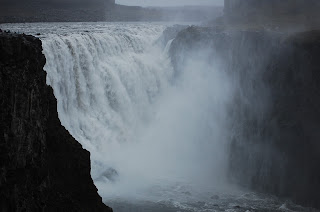 Throughout the entire trip there were constant reminders of the fact that Iceland was in no way a litigious place. At this all mighty waterfall, there were no guard rails and very few "do not go here" signs.  No one seemed to care how close we got to imminent death. Which was kind of refreshing and exhilarating. 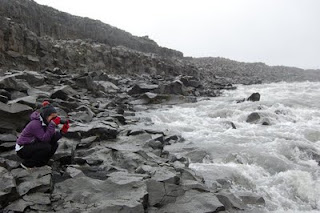 After the waterfall and brush with death, our only goal was to drive 466 KM and try not to kill each other.  Luckily we had recently discovered Mike and Tom Eat Snacks.  A podcast that is quite simply perfect for a road trip through a foreign land.  I am pretty sure we listened to almost all the snacks.  Not only did we listen to snacks we GOT snacks out of this bad boy. 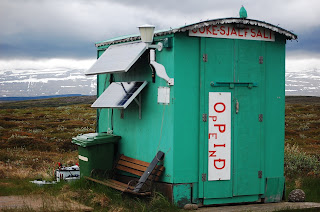 A completely solar and wind powered snack hut.  Of course it is in the middle of nothingness in the Eastern Fjords (by this point we were at about 1:30 or 2:30 on the Iceland clock of geography)  We got lost for a solid hour or two, but it was completely worth it for snacks and the puffins.

I could tell you lots of facts about puffins but here is what you really need to know. 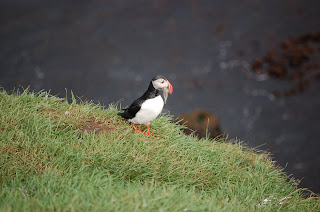 2- Their babies are called pufflins 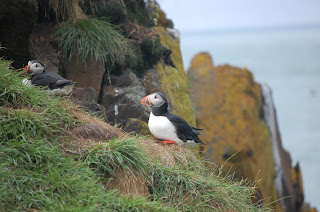 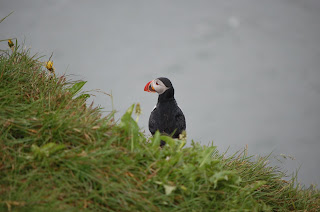 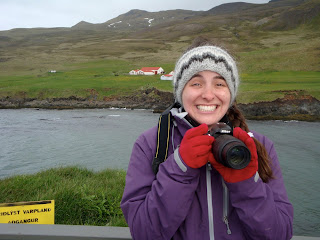 This is my puffins face.  My eyes are squinty with happiness.
After visiting with the puffins, we got back in the car and continued through the Eastern Fjords which look kind of like their Western counterparts.  It did not stop me from taking pictures. 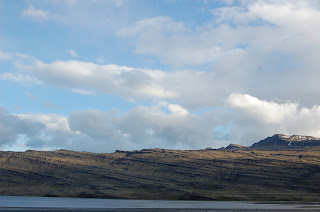 Since this is a short recap, here is interesting stuff that you should know about the trip in general.

-Since what we were eating from the grocery store was not a balanced diet by any stretch of the imagination, we supplemented it with Icelandic hot dogs.  They are covered in delicious sauces.

-Besides MATES we listened to mostly Adele's "21" album and my favorite Icelandic songs, "Jungle Drum" by Emiliana Torrini and "Little Talks" by Of Monsters and Men.

-There are sheep everywhere in Iceland.  They are adorable but hard to take pictures of without stopping and getting out of the car.  Luckily we had to stop to let some of them cross the road which gave me a chance to take some pictures. 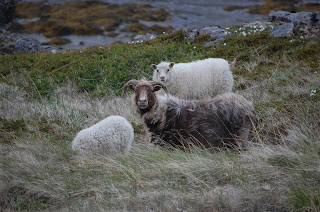