I am pretty sure that everything that happened in Iceland before day 5 of this trip was just making us cocky. However, in the moment, I think we just thought we were getting comfortable. We thought we were doing juuuuust fine. Little did we know what lay ahead.

First adventure was a total dud. We got up at 6 AM and head out to Snaefellsjokull National Park only to be told that we couldn't get into the visitor's center until 10. Womp womp. 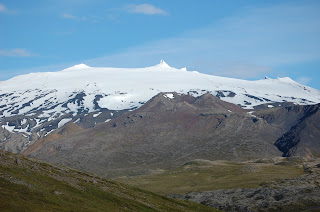 And so my only pictures of Snaefellsjokull were taken out of the back of the car. I am sad we missed it, but it was billed to me as "Little Iceland" (as in its got all of the neat stuff of Iceland packed in to a much smaller space) and since we went ahead and did regular-sized Iceland, I feel like its okay that apparently, the staff of the visitor's center is extra lazy.

So we skipped ahead to our next adventure, Helgafell which is a hill, just outside of a cute little town called Stykkisholmur. The jam with Helgafell is you get to make three wishes BUT there are a lot of rules that need to be followed.


First - you need start in the correct spot which we are sort-of-kind-of-maybe sure we found, but really we just started where everyone else did. It would be super hilarious if they made the start of the trail not the actual start for the wishes-bit. But those Icelandic people, they are way too nice to pull that kind of crap.


Then- you have to walk up totally silent. And you cannot look back until after you make your wishes. This, I am pretty sure is to get all the tourists to shut up for like, 10 seconds, because it totally works. This was the longest stretch that we were awake and not talking the entire trip. Just for good measure we didn't talk at all until we made it back down. We are dead.ass about wish granting.


And finally, you get up there. You face East (there is a compass up at the top, thank the little baby Jesus) and you (silently) make your wishes. 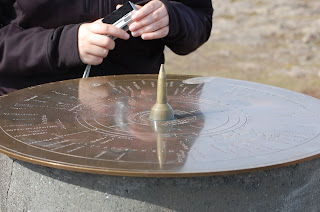 Then, of course, you take a bunch of touristy pictures, and on the way down you judge the people coming up behind you who clearly have not been told the rules because they a) talk and b) look behind them. They will obviously die miserable and alone for not following the made up rules.

After the hill, there was a stop at crazy awesome church two in Stykkisholmur, which looked crazy from all angles. Followed by a lighthouse and some water. 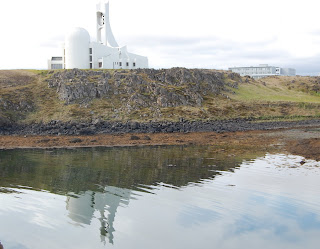 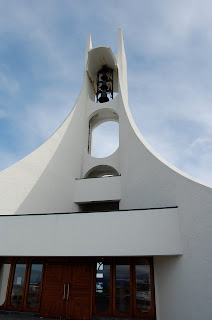 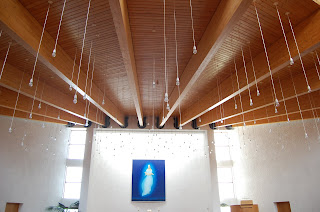 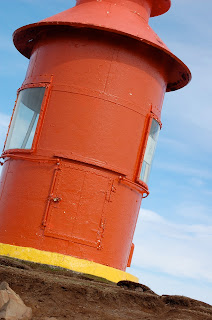 Then it was on to Holmavik. The cutest gosh-durn town I have ever seen. The most important stop was the Witchcraft and Sorcery Museum where we learned all about what is needed to cast Icelandic spells and how you will totally get burned at the stake if you are at the wrong place at the wrong time and some one's wife is sickly.

After this we spent some time talking to the man in charge of the visitor's center who was excited to tell us all about his lovely town. When we explained that we had bigger and better things to do, namely the Latrabjarg cliffs. We should have noticed his hesitation when we said that we were just planning to drive out and come back. But no. We had climbed a HILL. With Wishes. Nothing was too big or scary for us.

Turns out driving the Western Fjords was EXACTLY that big and scary. It is a little bit Stella the GPS's fault. Stella had a habit of telling us a destination would take a certain number of hours and then continuously adding to that number as the journey progressed. So the journey we were told would take three hours one-way actually ended up taking about six. Bad Stella. Stella also failed the mention that the roads would be terrifying. 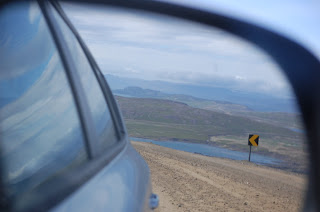 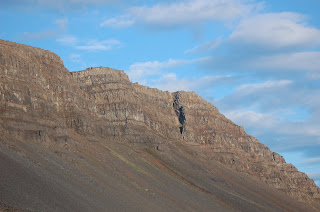 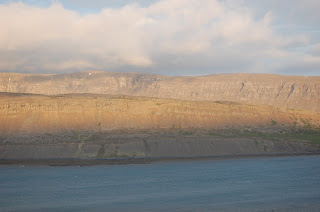 Anyway, they say its the journey, not the destination that matters. Which is good, because we never made it. We got within in a mile of Latrabjarg cliffs before realizing that our little, cute rental car was not going to make it on the dirt. So we turned around and did the whole crazy thing AGAIN. This time with a stop at a waterfall to keep us from going totally insane. 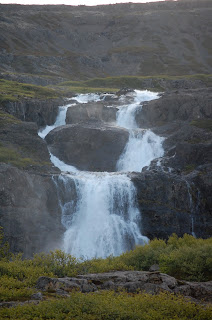 Naturally, a six hour trip on the way there is also a six hour trip on the way back which meant we didn't get to our hotel until 2 AM. Just in time to realize we needed more music to listen to in the car and oogle our adorable hotel room that we would only spend six hours in before heading out again (a note for you travelers out there, if you are going to try to replicate our ambitious journey, find cheap hotel options - nice hotels are nice, but its not worth the cost since you will only sleep in them and even that you won't do much of - although a private bathroom every night or two makes a world of difference).

Day 6 was the day S.S. Big Britches got taken down a few notches when we were told that we had a flat tire. But by the grace of all the best things Iceland - the town of Holmavik came to our rescue and we got our tire patched by Kali (because Danni was in Reykjavik).

By the end of the tire patching adventure we had just enough energy to drive to Husavik, see the Phallalogical Museum (easily the weirdest thing I have ever paid admission to), take a picture of Courtney next to the phallalogical bit of a sperm whale, go grocery shopping and actually take some time to enjoy the second nice hotel in as many days.
Posted by Rachel at 10:56 PM