Wow.  You hiked up a glacier, that's a big day for you, Chub-chubs.  So, did you take the next day off to recuperate?

This trip kind of followed the story map that we are all taught in English class.  Some exposition, a whole bunch of build up and then, fifteen pages from the end, a crazy climax.  Days 9 & 10 were the peak of the story.

We slept in as much as you can when its bright as noon (still not really adjusted) and the children sharing your room are all sighing noisily as if they want to get up, but can't?  I am not one to debate parenting techniques but I feel like if your kids are all up - its time to get up.

And we took exactly seven steps around the corner of the Hostel building and were greeted with this. 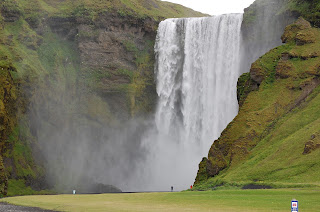 Skogarfoss was one of my favorite waterfalls because we got to get so close to both the bottom and the top of the falls.  Day 10 was the day of wishing that I had a waterproof camera because my silly, amazing camera was fairly useless as I desperately tried to take a picture from essentially IN the waterfall.  Then we had to hike up to the top to get that view. 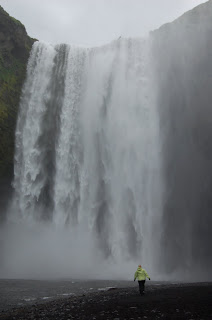 This is when it hit home how out-of-shape I was/the enormity of what I had conquered the day before.  I sang Disney songs to get us up to the top where we had a solid shaming as we saw a couple in their 60's hustle up at a rate about three times faster than us. 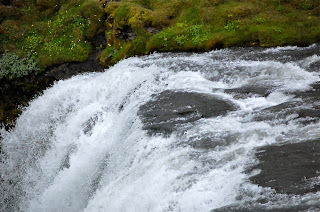 Once we got back down, it was time for a quick photo shoot in a field of the Nootka Lupin.  I was never not in love with these flowers.  I am excited to try to grow it next summer. 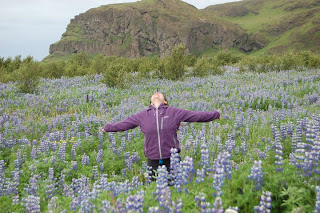 Then we were off to the magic of the Golden Circle.  First stop - Pingvellir (or actually Thingvellir, or really, really - Þingvellir) - The Thorn is my favorite of the crazy Icelandic alphabet characters.  We got there with just enough time to look around a little bit before heading out for our snorkeling adventure. 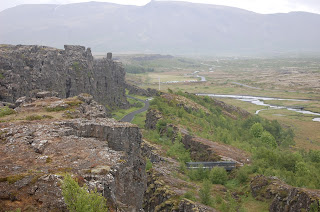 Before the actual snorkeling our adorable, elfin tour guide man gave us the lowdown on Þingvellir and we stopped for some pictures in the big ole crack in the plates of the Earth.  The best part was that there were a couple of awesome girls on our trip who were able to capture our only trio jumping picture of the trip. 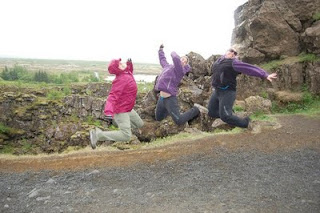 Then it was suit up time.  Snorkeling required stripping down to long underwear and then putting on a puffy marshmallow suit before the dive suit.  Then gloves and a cap and we were ready to party. 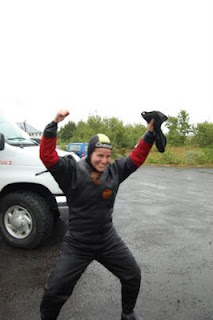 Where we went snorkeling is called Silfra - and while they tell you that the big old rocky bits up top are where the plates are splitting (and they are...kind of), its actually down here in the crystal clear waters that the world is being her crazy Mother Nature self.

The water was ice cold and completely numbed my lips every time I put them in the water, the suit kept everything but my hands warm and, if anything, was too buoyant as I did not really have control over my body in the water as I had to fight to push myself into a standing position.

Before we went in, the guide asked if anyone was afraid of heights.  It seemed like a really ridiculous questions until I looked down and had the same sensation I do at the top of any tall building.  It was the most strange and surreal experience ever.  The water is perfectly clear so you are looking down 100 meters (or 328 feet).  Higher then I have ever been without the use of an airplane or a building.

There aren't a ton of fish, just plant life that is these electric shades of green.  I struggled with the snorkeling, having realized right before we got in, that I had never actually done it before.  Also, having cold lips was nothing compared to cold hands. Unlike normal humans, I prefer to use my hands to swim, rather than my feet but I was instructed to keep them out of water as much as possible, so I was left trying to paddle with flippers (never really used those either) and unable to get more than half my body underwater while ALSO dealing with the face that my snorkel thing was constantly full of water.  It was drinkable, delicious glacier water but left me struggling to breath without putting my face up.

This, believe it or not, despite the fact it only was an hour or so of actual in-the-water time, was far more challenging than the glacier hike and yet another thing that I don't have any pictures of.  I wasn't going to drop the $50 needed for a rental water-proof camera, but I am sure the images I would have gotten would have been amazing.  It is truly fine, though.  Like whale watching, this is something I am happy to have as a just me and mah friends experience.  There are lots of great pictures on the internet, that's exactly what it looked like.

Then, after we took off all our snorkel gear we got to jump in off one of the ledges that was about 6 meters (20 feet) up from the water.  So silly and fun and ensured that if we weren't completely wet and cold before, we were now.

The next stop on the Golden Circle tour was Geysir and his friends.  Geysir, is the geyser that all other geysers are named for.  Apparently, it was pretty awesome until the mid 70's when dumb (probably American) tourists would throw rocks and coins and small children into Geysir to get it blow (anything for a photo op) and so now it is all messed up and unreliable.

Strokkur is the more reliable younger sister who we watched a few times. 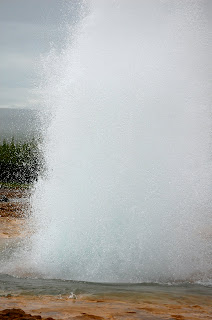 It was so hilarious standing around with all these other people, cameras at the ready, waiting for Mother Nature to do her thing.  And there would occasionally be these bubble up false alarms where everyone would get all pumped and then it would be another four or five minutes before anything happened.  Mother Nature is a tease.

The area around Geysir reminds me of a ogre's swamp or something.  Its all muddy (possibly because it was raining while we were there) and the earth is bubbling and popping and steam is rising.  The faerie people who are rumored to live below the surface there must have fantastic, soft skin and virtually no pores.

After getting a few good pictures of Strokkur it was time to head out once again.  We made the decision to skip Gullfoss for the day and just head to our hotel.

We got to the adorable little cabin that we called home for about 10 hours, and then got gas while also getting our very first bacon wrapped Icelandic hot dog.  I think we would have been disappointed if we had discovered these earlier in the trip, but then had not been able to get them for two or three days because they were even more amazing than regular Icelandic hot dogs which were pretty close to perfect.
Posted by Rachel at 1:30 PM