We woke up in our super adorable little cabin and got ready for our last real day in Iceland. The first stop was Gullfoss.  Gullfoss was a very awesome last waterfall (save the best for last and all that).  Once again, we got right up in the waterfall's face and took lots of pictures.  But let me tell you, I was surprised at how totally meh I was about waterfalls by the last day. 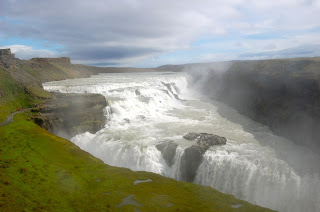 There were hundreds of waterfalls along our journey and they were all stunning and gorgeous and unique.  But after 10 days I was just exhausted of gorgeous natural wonders. 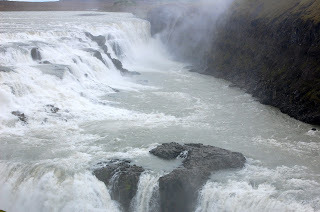 After the waterfall, I finally got a picture of my favorite street sign. 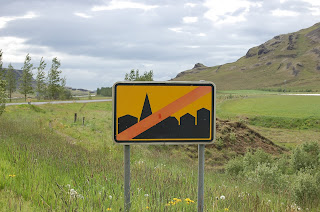 For awhile we would see this sign and just scream "NO TOWN," and, in our fatigued and overstimulated brains, it was hilarious.  Every time.

On the way back from Gullfoss we stopped for an incredibly necessary car wash. 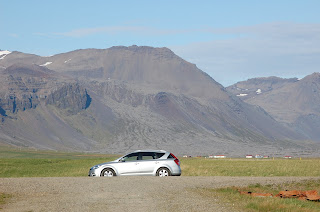 in her clean, pre-flat tire state on the first day of the trip
Our little Kia (nicknamed Mrs. Marion Coatsworth-Haye of Marble Head - bonus points if you know the reference) went the distance for us.  Literally.  I had no idea what we were going to put that car through and she took it like a champ.  After the flat tire incident it was smooth sailing.  Except for the fact that she was filthy.  So we gave her a nice car bath and then had our very last Icelandic hotdog (sob.)

After hot dogs we went to the Bonus to buy tons of candy to take home.  Coconut Chocolate Chip Maryland Cookies (which you can apparently get in other parts of Europe, though I've never seen them), Nizza Chocolate Bars, and Hraun Lava Bars are all awesome and worth the price.  Be careful of the bulk candy though - apparently everything is either a gummy or a licorice covered in chocolate.   It is very disappointing after you have bought $5 worth to realize the Icelandic error in judgement.  Also, while you're at the Bonus - get some rye bread and pancakes to take home.  Even the plastic wrapped, store-bought pancakes are going to be an excellent life choice as take-aways from your adventure.

Souvenir shopping out of the way (for the time being) it was time to get on the road to the Blue Lagoon.  While we were super excited for this adventure, I think it cemented in all of our minds that the Iceland trip was coming to a close.  And it was pretty sad.  We had worked so hard and done so much that to have it all be over so fast, seemed kind of surreal.

Once we got to the Blue Lagoon, things got even more surreal.  We were pretty over all the naked pre-showering that is required, but we were not over how many people were going to be there.  It was freezing that day, and kind of rainy but then you get in the water and its the nicest bathtub ever, and it's full of a bazillion (mostly European, thankfully clothed) people all just kind of floating around in little huddles.

We didn't take cameras because we were not sure where to put them, turns out people just leave their cameras all over the place and no one steals them, because its Iceland.  But we didn't trust it.  So no Blue Lagoon pictures.  But it was lovely.  The best part was the 30-minute massage from the big lady with the strong hands.  Let me tell you, I am going to pick the burly lady over the hot guy to do my massage every time because you know she means business.  A massage is the perfect way to end any adventure, but particularly one where you have been sleeping on crappy hotel beds, asking your body to do crazy stuff it rarely does (hike, ride a horse, sit on a boat) and sitting in a car for upwards of 4 or 5 hours a day.

After face masks, massages, the most amazing waterfall of them all (we got to stand under it! I punched a kid because he wanted a piece of my waterfall space and I wasn't ready to give it up) and tiny bottles of champagne at the swim up bar - toasting to our continued world domination - we left the Blue Lagoon behind.

Then we got to our final hotel.  And let's talk about saving the best for last.  Each hotel had its own quirks and charms and I liked all of them, but our final hotel was by far the classiest and for not that much more money (if my brain remembers correctly).  We had the incredible honor of being one of the hotel's first guests ever!  We christened this fabulous room with a loft space and one of the most amazing bathrooms by breaking a glass in the bathroom.  Hotel Berg, y'all.  Its the ish.

Also, to make it more awesome, the woman who owns it also is the owner of one of the most famous dogs in Iceland (and the website Bulldog.is). Of course she is.

For this, our final night in Iceland, we decided that it was time to finally eat real food again.  So went to Kaffi Duus, per the hotel/famous dog owner's recommendation.  An Excellent Choice.

We ate as though we had never eaten before.  We started with a seafood sampler which was amazing because Iceland knows whats up when it comes to things that live in the sea, but also because there was this sauce.  This "jus," if you will, that was made with garlic and perfection.  We ate every morsel.  When we ran out of bread we used spoons.  No classiness here.  Not when olive-oil-based happiness is on the line.

Then we got our entrees which were all amazing.  Of course, I loved mine the most.  Bacon. Wrapped. Monkfish in some sort of sauce-mess that reminded me of hollandaise sauce that some lobsters had had a dance party in along with some obligatory vegetables.

I ate the whole thing.  The whole thing.  I know, because McKim "you won't," me into it.  Did I feel less like a champion than I had anticipated after that last bite went it?  Sure.  But I do not regret it.  It was the most awesome.  The calories in that sauce alone totally made up for the lack of actual food over the past 7 days.

We finished dinner and then went back to the hotel to rub our bellies, pack and watch movies on the first TV we turned on all trip. And to put irrational amounts of conditioner in our hair.  Mine, at least, needed it.  I made the terrible mistake of not bringing a hair elastic to the lagoon so all of the things that are good for your skin in it reeked havoc on my hair.  It took four days of deep conditioning after I got back to Chicago for it to finally feel normal again.

We woke up the next morning and had our very last adventure of getting gas, and then returning the car - both of which gave me panic attacks (the former because I thought we were going to be lost forever, not get gas and miss our flight, the latter because I figured right away they would see the tire patch and we would be totally effed and out a bazillion more dollars).  Then we got to the airport and I lamented to the nice gentleman behind the check in counter how sad I was to be leaving.

So of course he offered me $1000 in Delta dollars to stay (due to an overbooked flight).  There was a moment, when I hoped McKim and Musar would decide it was a good idea and we would have one more day.  But when I really thought about it - I wanted to be home in my bed with clean clothes and more conditioner.  Though, a part of me wishes I had stayed for one more day at the blue lagoon.  Ah well.

Anyway - once we were through security.  It was time to go shopping.  And shop we did.  To the tune of me maxing out my international credit card, and then spending all of McKim's extra cash.  I was officially broke at this point.  But satisfied.

With 20 or so minutes to go before our plane we figured it was time to saunter down to the gate.  We got about halfway there and were greeted with a line of epic proportions.  All humans waiting to get on planes like ours.  The line was easily 40-minutes long.  And our plane was scheduled to be high in the air by then.

Panic set in once again.  Musar kept a cool head and found someone willing to let us cut in front of her in the epic line.  Why? Because this nice lady had just spent some time in Iceland and the goodness had rubbed off on her.

Finally we got on board and by a stroke of good luck and shenanigans I got to sit next to McKim.  So we could drink red wine to excess and talk about big, scary things.  And how awesome Iceland is.  Oh, and watch Jane Eyre (the new version) which was horrible.

Also we got to sneak a peak at Greenland as we traveled over it.  If we thought Iceland was bad ass, it was Greenland's wimpy, hospitable little brother.

Finally, we were back in America.  And then after some wrangling, I was back in Chicago.  And where was my luggage?  Cincinnati?  Of course it was.  So I went to the Delta lady and she took one look at my smelly, hungover, bedraggled, sad-at-being-home self and told me they would drop my luggage off at my house.  Be pathetic and polite- and people will be nice to you.

I get on the blue line to go home and suddenly, I am overwhelmed by everything.  The noise, the smells, the people, the fact that there aren't waterfalls and purple flowers outside my window.  It was hard to come to terms with how much I fell in love with nature over those 12 days.  I fell in love with small towns and vast landscapes.  With adventure and solitude.  With trying new things and old things.

Iceland was amazing and every penny was worth it.  But it wouldn't have been half the trip without the two gems I traveled with.  They both made the loveliest of travel companions and I hope this trip hasn't turned them off me for life, especially since I bogarted the baby carrots...and used their pictures on my blog without asking. 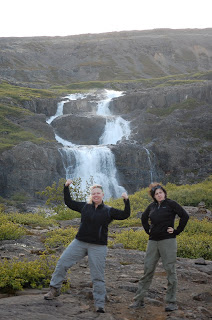 Thanks for coming along this journey with me.  These posts will change as I get the energy to add additional links and tidbits.  Just getting though the story was (clearly) an arduous process.  And if anyone is reading to this point, thank you for listening. 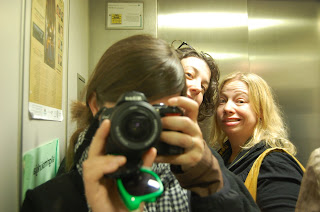 Thank you for sharing your experience and the images.

Look forward to tales from your next adventure.