If you're anything like me (and for your sake, I hope this is not the case - but, just go with me) you probably have a lot of basil at your house.

Apparently, this stuff is impossible to kill.  While most of the plant-tending falls to Boyfriend and his vegetable-whisperer hands, I can even some how keep basil alive.

And its not just alive.  It thrives.  It is unstoppable.  Which is sometimes more trouble than its worth.

Boyfriend is quite good at making the vegetables grow, but he lacks the initiative to then utilize them.  So when I stepped out on our deck garden two weeks ago, I realized there were four or five lush green basil plants humming merrily along on their way to being coriander that had yet to be touched.

So while Boyfriend was having a well-deserved break from me in Alabama - I got down to business.

Obviously my first thoughts were pesto and caprese salad but since there is so much I knew I was going to have to go outside my little box.  So I went to the only place where I get new recipes (when my mom isn't around) - the internet.

Here is what I have for you.

Basil, Artichoke, Tomato Pasta.  I found this recipe here.  Its pretty much a no brainer, as its basically a caprese salad in pasta, but I was stoked by the addition of artichokes (canned, obviously) - I didn't use marinated ones because that's the lazy way out.  I just sauteed them with the tomatoes in golden balsamic (because its what we had) and pretty much any spices I could find.  And I doubled all the good stuff to add to the pasta (recipes are so stingy with the food that actually tastes good).

I think if I make it again, I'll use sun-dried tomatoes, because they have way more flavor, and make some sort of dressing, because this was a little too dry for my taste. Oh, and shredded moz. (instead of little balls) because then you get the melty cheese in your pasta which always makes turning on the oven in the middle of the hottest summer ever more worth it.

And then? Corn-and-Basil Cakes.  These are my most favorite thing of this very moment.  Noble Pig is always my first stop for new recipes.  The problem is, I don't know what kind of glamour shots operation she has going on but her food looks amazing.  Mine does not.  These especially refused to get actually pancake-y.  They just looked sad.  Womp womp. 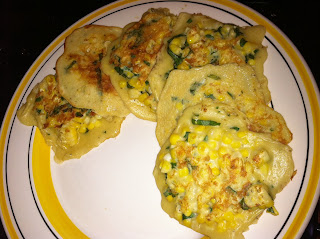 sad but yummy. Yummy Sad.
Also, I put a ton of Old Bay in which was the perfect addition.  I think next time they need more flour and possibly to be cooked in a skillet instead of on the griddle.  But seriously, so delicious (and really simple).  Do it.
Of course, it may be Sunday night, and you may be trying to eat all the food in your house in preparation for your upcoming annual pilgrimage to the best place in the universe.  In which case, this is a perfectly acceptable basil usage. 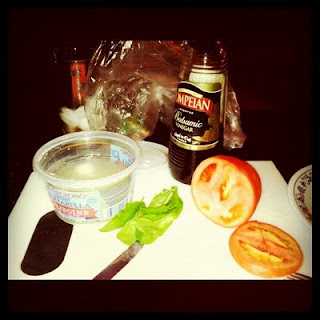 Not classy - but crazy delicious. No plate required.
Posted by Rachel at 10:24 PM