A few weekends ago took us on our first trip out of Chicago in 2014 for which we are eternally grateful.

We literally *just* made it out. There was snow and surprise champagne and trying to catch a cab on Elston (a serious Chicago no-no).

But we made it to LAX and I immediately started taking off layers.

Here's the thing, normally, 50 degrees and dark is a little bit cold, but to a body that has been stranded in Chicago since the dawn of time, it was basically tropical.

We ended up staying in Santa Monica because all I wanted from this trip was lots and lots of beach time. We stayed at the Inn at Marina del Rey which has a sketchy-sketch vibe, but was a perfectly lovely hotel and even came with a bonus drunk and disorderly possible-prostitute who put on quite the show during breakfast on Saturday morning.

Sixty glorious degrees and all the sun a girl could want. 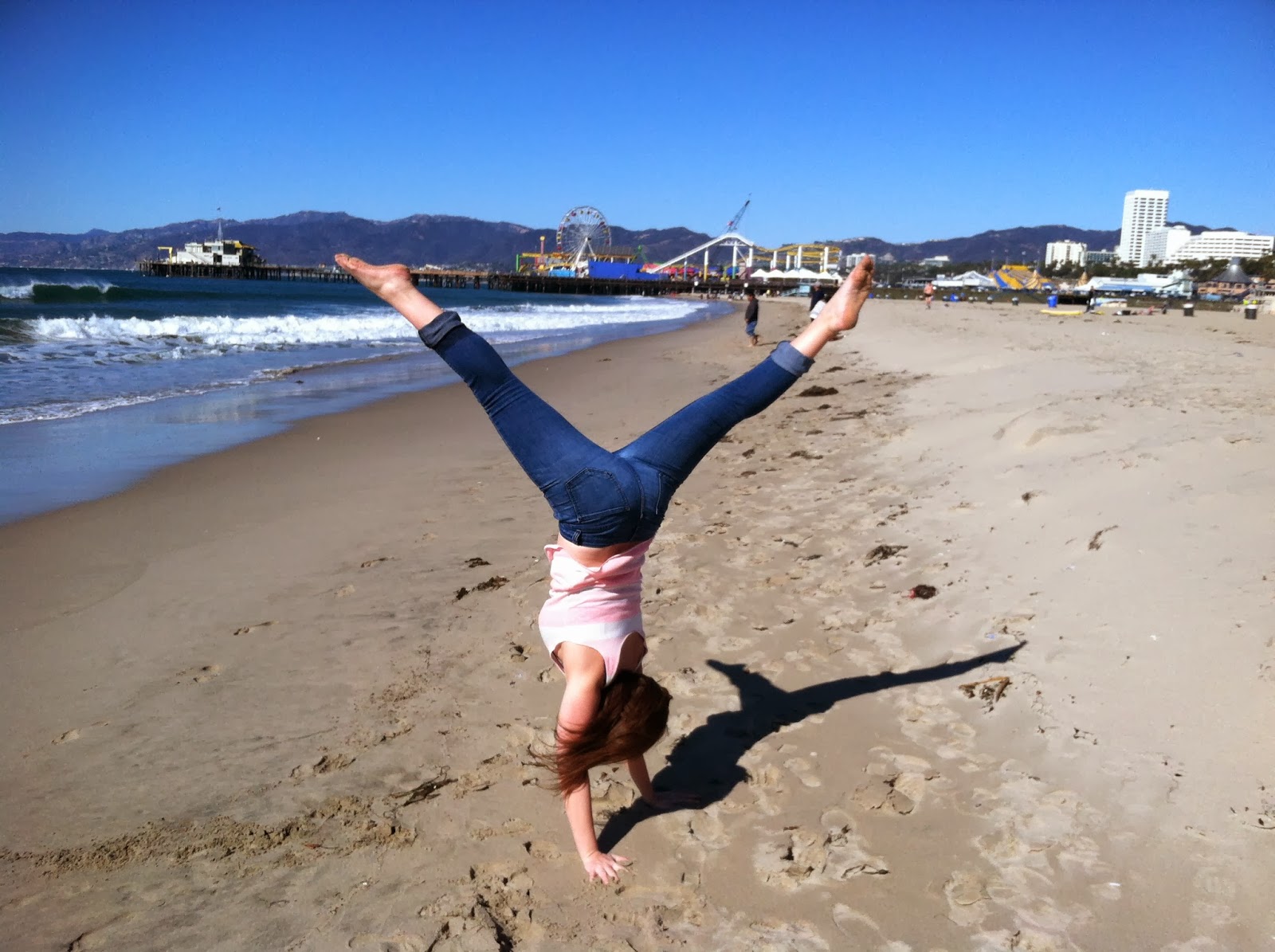 We walked all the way from Venice Beach to Santa Monica which is pretty far, but felt absolutely amazing. We wandered around the Santa Monica Pier which was pretty lame for anyone over twelve, but we snuck in some arcade games before trying to find some lunch.

Lunch was provided by Border Grill. We thought about doing their all-you-can-eat brunch, but the thought of walking back to Venice Beach on an overly full stomach did not sit well, so we just had some tacos (the al pastor, fish taco, carne asade and chicken). If I had to chose between the Border Grill al pastor, and the Big Star al pastor taco I would probably die. Guys, why do pigs taste so good?

We walked through Abbot Kinney Blvd which was so delightful. I had already splurged on a new jacket within 30 seconds of getting to Santa Monica so I resisted buying anything, but there was so many fun things and it was nice to walk through something that wasn't a Gap, even if I could not really afford most of it.

We got back to Venice Beach just in time to catch a windy sunset and before walking to Chaya because the internet said we should go there. The internet has a very bland palate because it was fine, but not too exciting. There was lots of cheap booze though and that hid the fact that the food was kind of a snooze.

The next morning we woke up with a long itinerary. Here you go:

Los Angeles Memorial Coliseum: My very first Olympic stadium. I tried not to be too down-trodden by how down-trodden it was, but still, there is a stir in my heart when we walked up. I have that Olympic fever fo' life. Bonus excitement when we were pretty sure we were going to be arrested for trespassing.

La Brea Tar Pits: Underwhelming, but a lovely place to drink a cup of coffee.

Walk of Fame/Grauman's Chinese Theater: I did not know any place could be worse than Times Square, but I found it. It's only redeeming quality was we discovered that we have the same size hands as Jennifer Aniston (me) and Harrison Ford (Boyfriend). There is a really lovely Farmers Market down the block from the theater that only had vegetables and no baked goods. It was this moment that I realized Hollywood was really kind of broken and weird.

Hike up to Griffith Observatory: totally worth the hike for a pretty great view of the city - plus if you make it all the way up without passing out you can eat all of the sandwiches when you get back down. 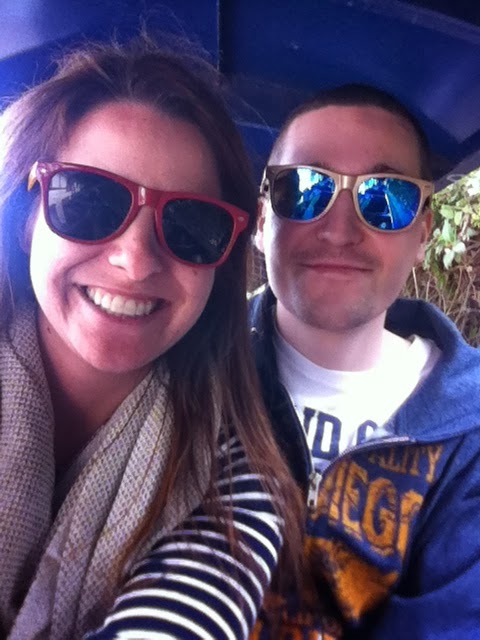 Travel Town: we ended up here on accident on our way to some other train place, and I hope that one was better because this one was lame. To be fair - we are like three days from cashing in social security - with one or two tots in tow, this place would be amazing. Lots of trains, lots of running around, and a train ride on a tee-tiny train. Don't bother unless you are a super train nerd or like a good excuse for selfies.

The Rose Bowl which just about crushed Boyfriend's dreams of the Rose Bowl, does it always look that terrible? They were clearly doing construction, but it is a sad stadium full of sad Badger losses.

From there it was a quick stop at the Grove to get my Dylan's Candy Bar fix because even when I am not think about it - I crave clodhoppers every day of my life.

We managed to survive on snacks until getting to The Churchill for the Superbowl. The Churchill would clearly not consider itself a "sports bar," because despite our reservation for 4:30, when we arrived at 3:45 pm we snagged the very last table in the place with a not-so-great view of the TV, but a killer brunch menu that they were still serving. We landed the brussels sprouts pizza and the chicken and biscuits - both far, far better than any football game. 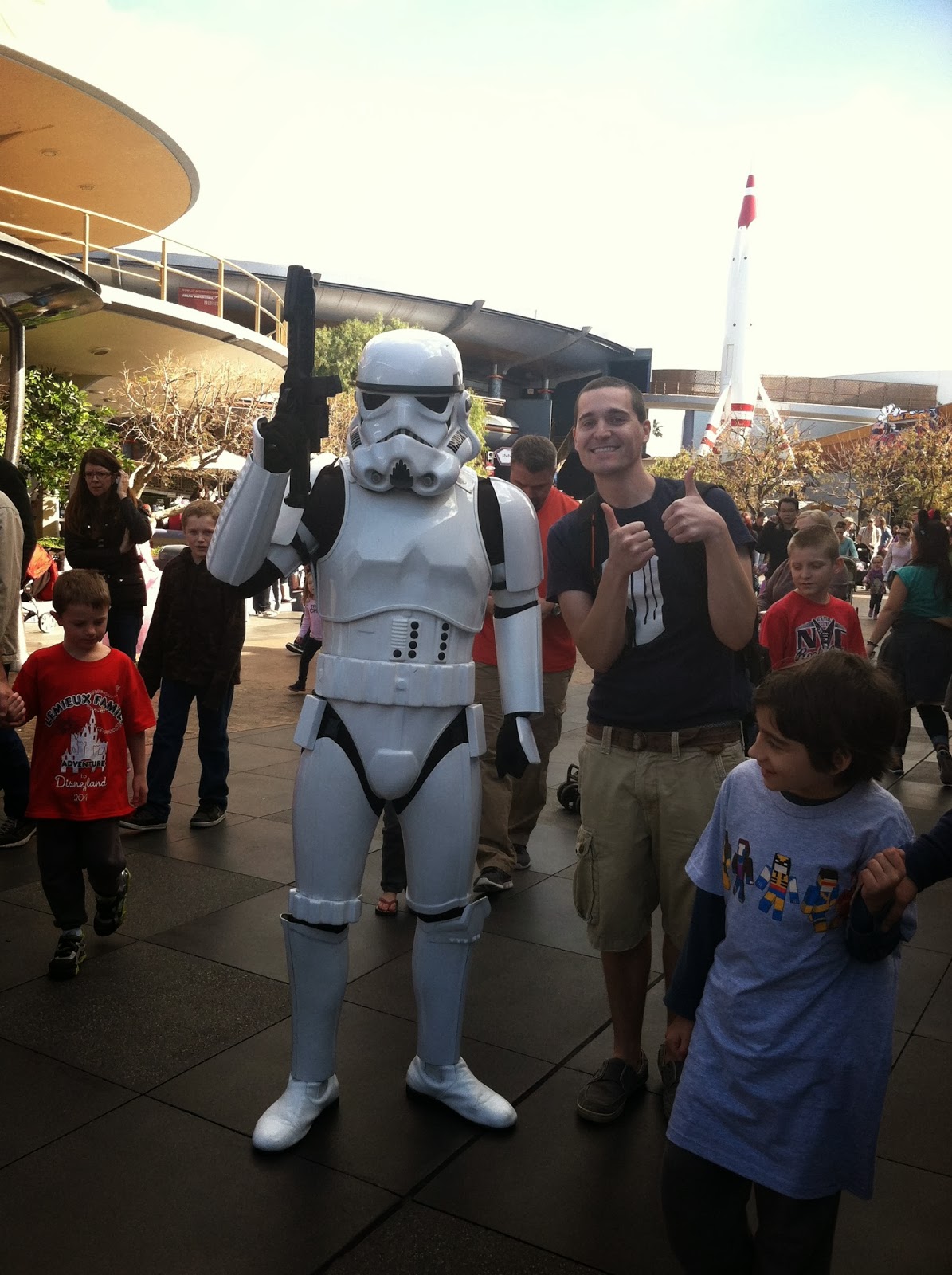 The next day was non-stop-Disney-til-you drop. I could write a whole blog just on how we are the winners of both Disney parks, but I will spare you. What I will say is if you have a choice, always pick Disney World over Disneyland.  The comparison is shameful. The Disneyland castle is weak. The day had its highlights of Boyfriend cutting in front of a kid to get his picture with a storm trooper.


If you are going to eat in Disneyland - we highly HIGHLY recommend the steak gumbo at the Royal Street Veranda and the fried green tomato sandwich (with sweet potato fries!) at the Hungry Bear.  If you are eating a cheeseburger then you are probably also the asshole who doesn't know how fast passes work and so I hate you and your entire matching-t-shirt-wearing family.

To wash that Disney taste out of your mouth, its time for the Getty. The water lilies and eavesdropping on a man teaching third graders about old furniture but mostly just soaking up as much vitamin D as possible in one of the prettiest, brightest spots in the city, also the tram. Double bonus points for the tram.

A really, really good bowl of Ramen for lunch at Tsujita and then back to the airport and back to Polar vortex sadness.

When we started exploring last year, we went in with the thought that this was an audition for a bunch of cities we might consider living in, which is why our travel decisions did not always make the most sense. Of course the one city we postponed is the first one where I found myself with a longer list in the "pro" column than the "con" one. It has its faults (build a light rail or something, guys), but I think we might have found our maybe-second-home. At any rate, this year's travel will mostly be repeats, but enjoy some add-ons to The Year(s) of Exploration.