So I recently made a tag cloud for this blog (you can see it down below, on the left). And I realized that while probably only about half of my blogs are tagged at this point - growing up is way out in first place. I never realized how much I talk about growing up on this sucker - although I'm not surprised. I am growing up, y'all. Every day and in every way.

Yesterday I was performing in an improv show for kids at an elementary school's literacy night. There I was dancing around like a fool and I had a flash back to my days in elementary school watching people do the same kind of cockamammy-bull honkey and thinking about how much I wanted to do "that." I wanted to be up on a stage performing for people. And what's really funny is that it was only later in life (when I got to be moody and 12) that I decided I wanted to be a movie star. When I was a kid, I wanted to be a d-bag on stage. And now, I am. Which is kind of awesome in a bizarre twisty way. And I think that it is the reason that I keep doing this show even though it eats up a lot of my time and energy, because little kid me wants to do it.

And today - right now actually, I am making a tart. Not a pie. A tart. A raspberry and lime tart. Right now it looks like this: 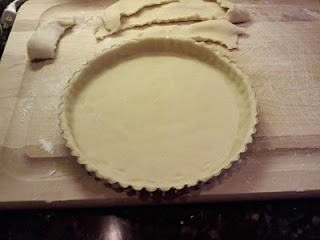 Boyfriend went out and bought me this 8" tart pan with a removable fluted rim. About 2 months ago if you had given me a quiz and asked me what I thought a fluted rim was, I would have given you an honest answer but I really wouldn't have seen myself owning one.

But then it was time to decide what I was going to make for this week's upcoming pot luck and I had a memory of Cougar making this tart and how I thought it was incredibly fancy and grown-up back then and I still do. So now I'm making it. Its much easier than I was anticipating thus far. And it was an opportunity to buy a new kitchen toy.

Kitchen toys, btw, have replaced barbies (of my very young years), American Girl accessories (of my somewhat young years) and dance clothes (of the rest of the years in my Mom's house) as the thing I collect. I know that if I wait to get married people will give me this stuff for free but this seems to make more sense at this juncture in my life.

And don't worry - I'm not too grown up. For dinner yesterday, I had this: 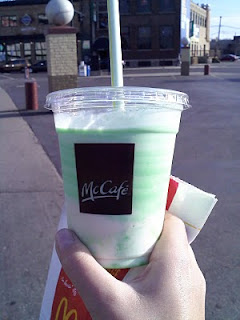 Yes, that's right, a Shamrock Shake. For dinner. Like a grown-up. And also, you might notice if you check the time stamp - I am writing this at 11:30 PM. I am making a tart at midnight. Because I didn't have time earlier today and tomorrow morning I'm going to watch rugby and I'll be too drunk to be able to make it in the afternoon.

So I'm growing up and I'm getting more okay with it. I was talking with a friend about how we know people who are a few years older than us who are still acting like 23-year-old disasters and how if we grow up now we might miss out on some stuff. But I look at all the older friends I have and the people who seem to be heading in the best direction(s) are the ones who know how to cook and who do grown up things like own property. Those are the people I want to be like when I grow up.
Posted by Rachel at 11:07 PM