So I kept telling myself that I really needed to write things down while I was abroad over the past two weeks (the 10th - 24th of June). I kept reminding myself over and over that I would forget all of my favorite things if I didn't take the time to write them down.

But if there is anyone I have a very hard time listening to - it's myself. So I didn't. I wrote 2 postcards and that's all. Which means now the memories are already starting to slip away. I'm forgetting what things felt and tasted like. Luckily - its Europe, its not too far/too expensive to return to someday. But there is something about your first* memory that is so important. They should really all be written down.

To readers- these blog posts will probably be unendurably long. Due to my tendancy to overwrite. Feel free to not read, or skip around...you won't miss much.

So my vacation started in the airport - as they all seem to do. I hope that when/if I have kids, they are awesome, fearless fliers. That they completely and totally trust in the magic of airplanes. Because I just don't. I hate every second of take off, and every bump of turbulence. As we desend I tend to tear up because I am sure that death is imminent and I've gotten so close to home/this other place it just doesn't seem fair.

But I make it to airport one, and then airport two. Where I proceed to wait. Luckily, my waiting is made less miserable by a Chipotle vegetarian fajita bowl (with guac, no sour cream). Dulles is easily the worst airport in the DC area, but I like that they're trying to win me over with delicious food options.

Naturally because we're flying commercial airlines, and its 2010 - there is a problem with our flight and so instead of spending moments in JFK, those moments will now be spent in Charles de Gaulle. And by moments, I mean actual, countable minutes as we race from plane to customs to security to gate, a race that would have been easier in English, but luckily the French (despite what I'll say about them later - have a very foreigner friendly airport).

Once we land in Rome, Rachel has her first panic about Something Bad. This time its that we did not go through customs a second time after getting into Italy. No amount of reassurance from various sources would pacify me. We were seconds from being deported.

Also we meet our first Cousin. Lei Lei (pronouced exactly like the necklace, except twice). Lei Lei drives like a blind bat out of hell, wears a fanny pack and a gold chain and speaks some English. But most of the car ride is spent listening to Dad and Lei Lei speak the gibberish of Italian while the three kids sit in the back, silently (and not-so-silently) fuming that we don't know the words. 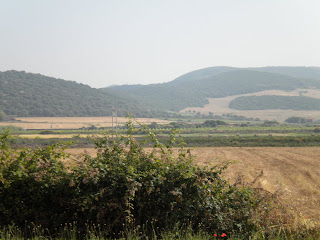 and party in the back. 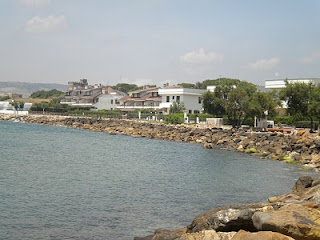 So its gorgeous no matter which way you turn.

Santa Severa is a wee little beach town, but it has its own castle, which is probably more impressive in the US than in Europe where castles are a dime a dozen. This one was nice though. 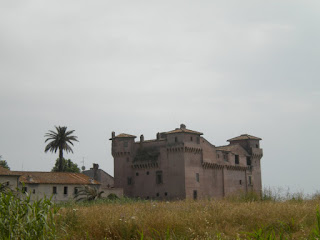 Our first day (Friday) was pretty lowkey. We got to the house and then went out for lunch. We had radicchio lasagna which was delightfully cheese-y and didn't taste nearly bizarre as it looked. I also had my very first bottle of carbonated water. Mmm. I love that carbonated water is so common in civilized parts of the world. Its such a better addition to the meal.

After lunch we tried to get Bear's and My Eurail pass all in order. This was the first of many times that the Italians were not cool with me wanting to be prepared. My cousin insisted that all of these reservations and validations could be made later, later and I shouldn't worry so much. But I kept pushing - which was good, because I think we may have gotten two of the last bunks for our overnight train to Paris. Everything else, I probably could have been a little more lax about, but that's not really my travel style.

Friday night we went for drinks and which come with various short eats (olives, potato chips, peanuts) which is kind of a nice deal. We drank Corona, which was absurd, especially when they put a lemon in it. But my taste for Italian beer had yet to be developed before dinner and gelato. 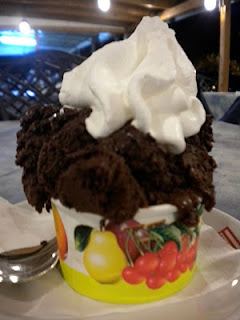 This is the kind of gelato that people write love poems about. Its so amazing. This particular flavor (Chocolate Fondant) was so dark and rich. It was easily my favorite part about Santa Severa. It felt so indulgent and hedonistic to eat something so good. Especially when (later in the week) it was combined with world cup soccer and free wi fi.

Day two was dedicated to beach lounging and eating more delicious, yet simple food. Day two's shout out goes to the prosciutto crudo e mozzarella panini we had for lunch. It was just a pre-made sandwich sold by the beach stand near our house, but it was by far one of the best sandwiches I've ever eaten and I have a wicked thing for sandwiches. 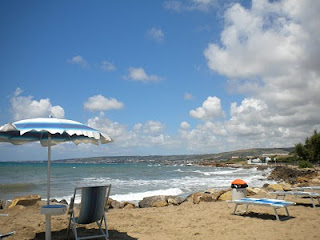 At this beach apparently you don't bring your own umbrella and beach chair - you rent them from the establishment, which is pricey but hands-free.

I had forgotten how nice it was to be on vacation and not feel like it was necessary to *do* stuff all the time. And the rest of this vacation was so manic, that these first couple days of quiet were, in retrospect, kind of perfect. 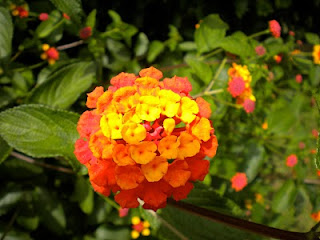 All that and you say you FORGOT stuff?

But don't worry, we don't really forget things... they're just stored away until something prompts them back to the forefront.

(That's why I take lots of pictures!)