One of the things that remained completely unplanned during this trip was our schedule while we were in Italy. When I left, I dutifully typed out an itinerary of where I thought I would be day-to-day (as told to me by Dad) and then it promptly was untrue. Thankfully nothing bad happened as no one would have known where I was.

So after much changing of plans, on Sunday, we took a bus from Santa Severa into Rome. The bus is apparently for poor people and foreigners (of which we are sort of both) but was very comfortable and air-conditioned (sort of).

When we got to Rome we met Eugenio, my dad's other cousin. Eugenio (pronounced exactly like that because I don't know how its actually spelled) wears black Armani Jeans, drives a car with two sun roofs, and speaks a very little bit of English (but is excited to try).

He was about fifteen minutes late picking us up. This is also a common theme of Italy. Everyone takes their time, or forgets the time, or is meh about time. Trying to not panic about this was something I didn't really get better at all week.

Eugenio picked us up and took us right into the Vatican. Where he found parking thanks to a handicap hang tag he keeps around for situations just like these (being tourists at the Vatican on a Sunday - or I guess taking an elderly aunt to doctor's appointments...but mostly the first one). 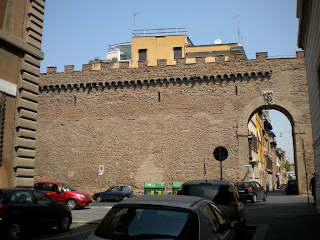 I found the walls around Vatican City somewhat intimidating, but was excited to learn that the Pope used to walk along the top to get to Castle St. Angelo when things got rough at St. Peter's.

When we got to St. Peters we met up with some of our first-cousins-once-removed (Eugenio and Lei Lei's kids - who are Bear's age, and younger). They are all very nice, but all of them were over a decade younger than I am so we didn't have really anything in common, but it was interesting to see Rome from teenagers' perspectives.

We got to St. Peters right before noon which meant A- it was blazing hot, and B- we were told that if we waited a few minutes we might get to see the Pope. The Pope is a big enough celebrity that we were willing to wait a few minutes (once we found some shade) to sneak a peak. 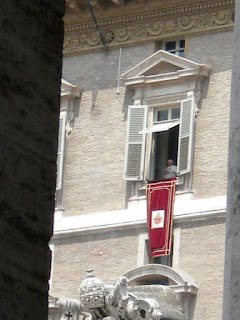 According to my cousins (the younger ones) the Pope's Italian is terrible, and he has a very heavy German accent, making him almost impossible to understand. He also did a few verses in German and English which was interesting to listen to as we walked down to get in line to go into St. Peter's.

St. Peter's is a very large church. While I find churches somewhat interesting, they don't quite get me whipped up into the historical, theological, artistical frenzy of some others. The most interesting thing that happened at St. Peter's was that when they attempted to enforce the dress code (no tank tops) on my 18 year-old cousin she refused to put on a sweater or figure out a plan B. Instead she just sat outside and waited for us - her reasoning being, "if they're allowed to molest small children, I'm allowed to wear a tank top." I was impressed with her ballsy-ness. Especially since it seemed like no one else was remembering that the Vatican is embroiled in some pretty messy business right now. 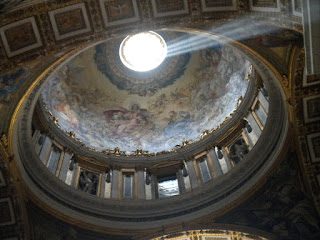 I really wanted to see the Sistine Chapel because its one of those things I felt that I should see but we were on a pretty tight schedule, apparently - so this ceiling was going to have to do. I enjoy all the sky lights I discovered in European churches. I feel that sunlight is probably as close as you'll ever get to "God" so you should let it shine in from on high.

After St. Peter's there was a very fast trip past the Coliseum, and the University of Rome, Engineering Building before going back to Eugenio's house for lunch. We didn't actually go into the Coliseum because the family said it was a waste of time. It was one of those things where people in Rome have much different opinions on what you should and shouldn't see. As I am sure people in DC/New York/Chicago are opinionated on what are the most important landmarks. It just seems different because the Coliseum is so much older? I don't know.

Lunch was an amazing yet, so simple, affair. Pasta with tuna, basil and tomatoes were served first. We assumed that that was all we were getting because it covered a fair number of food groups so Bear and I had two helpings each (tuna in the Med. is so delicious, it has something to do with their water). But then there was a buffalo mozzarella ball the size of my whole head 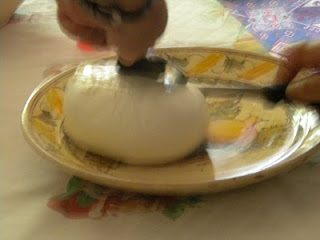 This picture doesn't really do it justice, but it was huge and so delicious. And then after the big, milky pieces of cheese, there was prosciutto, and then cantaloupe to eat with the prosciutto. And by this point my stomach couldn't possibly take anymore. So we stopped for a while before having this amazing ice cream cake desert (the name of which totally escapes me, but it is loaf-of-bread shaped and it has like a hard chocolate top and vanilla-y ice cream and there are various flavors - tiramasu, neapolitan etc. Ugh...this is going to kill me- please leave a comment if you know the name of what I am talking about, it starts with an "S?").

After an enormous lunch there was more walking around the city with family. We saw all of the typical tourist landmarks which was satisfying, and I eavesdropped on my cousin and sister as they talked about the differences in teenage life in Italy versus America. Mostly I just looked. I really, really love European architecture, and this will become a serious obsession when we get to Venice. But there is something about the structure and colors of older buildings in Europe (or at least Paris and Italy) that I really love. 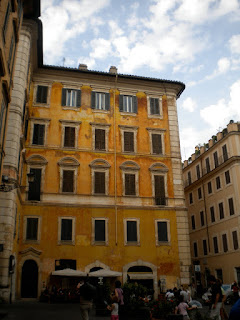 Eventually we headed back to the bus stop, where we discovered there was no where to buy bus tickets. And then we discovered that apparently no one buys tickets for the bus because they hardly ever check it. Naturally, my father insisted that on every other ride we buy a ticket - but for this one, we rode home like locals - for free.