Guys! This is my last Europe post! You can get back to hearing about my boring normal life. Woot. Woot.

Also - I am starting to forget things now (like when we went to that crazy big flea market north of the city - and if we went to lunch at the Tuileries before or after the Eiffel tower) so its good I'm almost done.

So, on our last real day in Paris - we had to do everything we hadn't done yet. Which would have been fairly obtainable except all of a sudden J. gave us a list of all these things we should do and there was no way we were going to get to all of it. So we figured we would do what we could and hope for a magical 30 or 40 hour day.

We started at the catacombs. I explained to Bear what they were and she was like, "um, okay?" 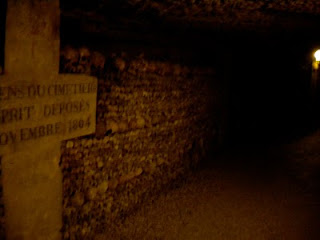 Oh. There they are.

So. Many. Bones. It was unbelievable. 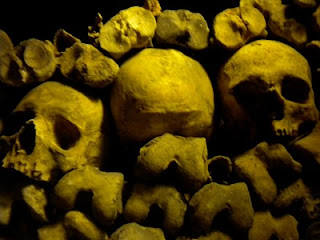 Finally Bear was like, Um...okay - I'm done. And it was pretty crazy how far the bones went. But finally we climbed up the longest spiral staircase ever (Seriously, what is wrong with Europeans why must things be on such different levels?).

After lunch we decided that after spending some qt in Monet's hood we should probably see some of his paintings. Except there was a LINE for Orangerie and we discovered it was going to be 9 euro each (or so we thought) - and we were very rapidly running out of money, due to all the buying of the stuff. So we skipped Orangerie because Bear wanted to spend her money on the Eiffel tower instead and I didn't want to deny her a tall building opportunity. So we velibed over to the tower and waited in line for that instead.

I got a lot of pictures of Paris from the top of it, which are way less interesting than I always think they'll be. 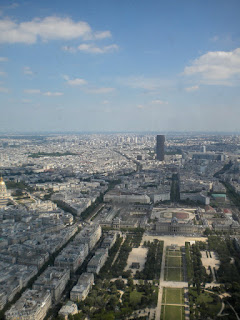 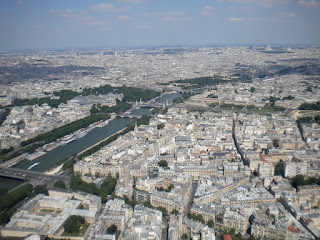 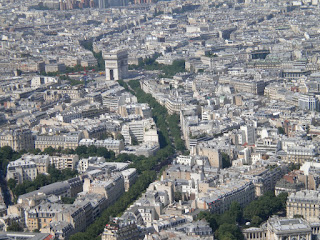 Really, my favorite part was the actual building itself. I don't know when I became such an architecture nerd, but I had so much fun learning about Gustave Eiffel and all the neat stuff he did. Even though, due to my current city I have to say I hate the Eiffel tower, secretly, I love it. 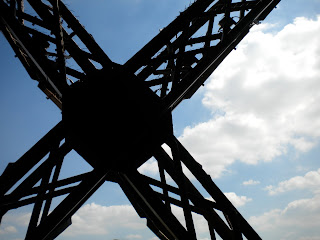 After the Eiffel Tower and some fun getting lost - we headed to the Centre Pompidou for some art (Finally! Seriously, we did not see very much art while we were in Europe, I have a certain God-mother who is probably livid at this confession, but probably not too surprised). The Pompidou is awesome and full of amazing things. My favorite (that we saw) was the Dreamlands Exhibition which I'm sure is a traveling piece. So very cool. There are a ton of other great things going on, but that was my favorite.

My other favorite? Bear got in free for being under 18. Apparently Europe thinks that cultural learning is so important for the youth that they let them do it for free. This helped incredibly when it came to funds. 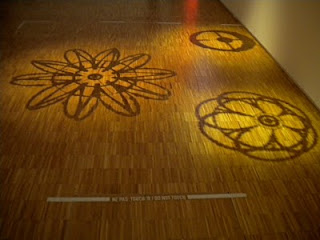 (this is not actually art, its the shadows cast by art, which I thought was infinitely cooler).
Then it was off to the crepe place which was open! And we juuuust managed to have enough funds to cover it and leave a tip for the nice waitress who explained nox to me. I could not remember that one. We had a breakfast-y crepe and then a one with salted caramel. I think we were so hungry that we didn't enjoy it as much as we should have. But it was incredibly delicious.

Then it was home to bed to get up way to early for our plane home. J. warned us that there was a transit strike already planned for that day, but that it wouldn't probably affect us. How kind of the transit workers to let us know they're planning on effing up our travel plans.

We got on the Metro and got off at the stop we were told to get off at, transferred to where the train to the airport was supposed to be. After a few minutes of there not being anyone around and no trains on the schedule, I began to panic.

Finally a woman in an orange vest came up to me and asked me a question. It took three or four times of her saying it for me to get it. Then I took a minute and crafted my question back to her. Then she talked and then I did and then her. And it was ALL in French. I had a full conversation in French about TRANSPORTATION. Not going to the biblioteque or what I was wearing or anything else I learned in Madam Bensing's class. I was very stressed, but so pleased with myself.

We were sitting on the plane for about 10 minutes before I realized we hadn't started going anywhere. I asked the flight attendant what was happening. I didn't understand her french so she tried it in English,

"the French workers, they don't want to work today."

Despite my frustration this made me laugh. Ahh, well, when I don't want to work - I normally just suck it up and do it, but not the french.

We sit on the plane for another 40 minutes or so and I start to panic about the fact that I only have about an hour and 40 minutes to go through customs and catch my next flight and Dulles isn't known for being connection friendly.

Luckily, I have eight hours to worry about it. And so I do. I also eat the food and get a little tipsy (if you are going to offer it, I am going to drink it).

Once we start our descent, I tell Bear that she can either make a run for it with me, or she can take her time and go through customs alone. I think she was done keeping up with me - and so let me race ahead. I got to customs and waited in line for what seemed like ever. My exhaustion from not sleeping for 10 or 12 hours is catching up with me. Finally it was my turn to be questioned.

Customs and Immigration Guy: So where do you live?
Me: Chicago
CaIG: So what do you do there?
Me: I run a circus.

at this point I realize I have made a grave error. I could have simply said I work for a not-for-profit, or youth development organization. I could have even just said that I work in the arts but no, I went whole hog and now I am getting Doubting Donny and the precious seconds to catch my next flight are slipping away.

He ponders this as I look impatiently at where I need to go.

And those are three minutes of my life I'll never get back. Rookie mistake on my part.

So I rush and run and finally I get to my gate and Of.Course. my flight to Chicago is delayed two hours. Sigh.

In all the excitement I also realized that my phone had turned on and then died in Europe so I was without a cellphone in 2010. This was almost more than I could handle. It required me buying peanut M&M's, so that I would get quarters so that I could use a Pay Phone to call Boyfriend and my Dad (my Dad to tell him that since my phone was on in Europe I might have a $700 phone bill) and then just wait and FINALLY. I got back to Chicago. I was greeted with a sign with my name on it and a hug and kiss.

And that was my trip to Europe. The End. Regularly scheduled nonsense to come back the next time I post.
Posted by Rachel at 8:57 PM