So as I mentioned - one of the major flaws of Milan was when we got there they told us that our sleeper car was not female only as we thought we had been promised. So I spent a lot of the panicking about what sort of whackado Europeans we would be spending ten hours with. That paired with the fact that when we were in the Police station (confirming that we were not going to get deported because we didn't have Italian stamps in our passports - which we didn't) - we saw a woman who was really, really upset and had no things, so we are assuming had all her things stolen, which was super scary.

Naturally the first thing that happened was we realized that our car was Alllll the way at the end of the very, very long train - I had read multiple times that occasionally trains leave the station very quickly so I insisted we RUN to our car with our 50 lb. bags. Bear was not amused.

Anyway, we get to our car - here were our train roomies:

1- A bitchy french woman (is there any other kind?) - she doesn't understand that she is on the bottom bunk, and then insists its broken and tells the conductor she wants a switch - naturally he fixes it in about 30 seconds which I think pissed her off more. She ALSO had like an absurd amount of bags. WHY? Do you not understand how small the train car is? Where do you think that is going to go, because if you think it is invading my personal space you are SORELY mistaken.

2&3 - A pair of 50 or 60 year-old Italian men. They seemed to be backpackers of the real serious variety. They were far fitter than I could ever dream of being - their backpacks looked so light and sensible. I am sure that a peek inside would have proven that they did not bring a formal shirt, jic. Once they established that we didn't really speak Italian at all they took charge - they got our bunks all set up, put the dumb french lady's bags up and out of everyone's way. Even though one of them snored for most of the night - it was forgiven because they made us feel safe.

4- At the very last minute a gentleman walked into the cabin - he was probably in his late 30's and looked like your stereotypical french man. He was dressed in what looked like a fairly expensive three piece suit and white button up with what had to have been four-figure boots on his feet. He promptly took off his jacket and fell asleep. I was mesmerized by his clothing. How do you sleep in a suit that costs more than my rent? I don't think he said anything the whole trip.

Anyway - the train trip itself was pretty uneventful. I discovered that the rolling of the train does not put me to sleep so much as it keeps me awake. But it was a pleasant awake.

When we got into Paris - we arrived at the Bercy station. I wanted to see if we could get some information about going to Giverny so I walked up to a person sitting behind a desk that said information. In my exhaustion the first words that came out of my mouth were in English. You could see her immediately shut down and get bitchy. She shook her head in disinterest in what I was saying.

I sighed. Of Course everyone was right about the French. So I tried another line and this time attempted some weak French. This girl rolled her eyes and repeated what I had said in a disdainful way. I realized my error and tried to correct myself but the damage was done. She was never going to help me. So I gave up.

We got on the train and went directly to J's. J went to college with my Mom on her first go-round at university. He is tres American but has been living in Paris for a couple years and has had quite the adventure. I would tell you about it, but it would ruin the fantastic book he is going to write in a few years. He was a perfect tour guide and after a quick croissant breakfast he took us right out to experience the Bastille Market.

The Bastille Market is a HUGE farmer's market that has every food I could ever think of. I so desperately wanted to take pictures of all the fish and the piles of tomatoes and perfect pieces of cheese. But there was not that much elbow room to begin with, and the people at this market were not there for photo opps, they were there to buy groceries. So I kept my camera in my bag, mostly because I am afraid of the French.

After a quick coffee J. got us our first Velib. Velib is my most favorite part of Paris. So we tooled around and got a wonderful bike tour (Notre Dame, Louvre, fancy bridges) until we got to the Eiffel Tower and it started to rain. 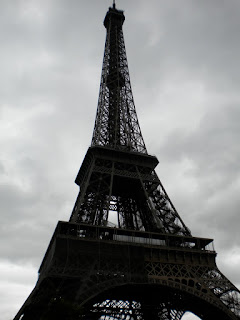 Please note - this picture is in color - it was just that gray. This was one of the two days of bad weather we had and it was actually a nice respite from the 85 and Sunny of the rest of the trip.

Then there was lunch and then the Hunting Museum. The hunting museum (or Maison de la Chasse et de la Nature) is probably in my top 5 of best Museums ever. For a few reasons.
1- Its a huge old house from back in the day - and it still looks like a house for the most part.

2- the ceiling made of owls. 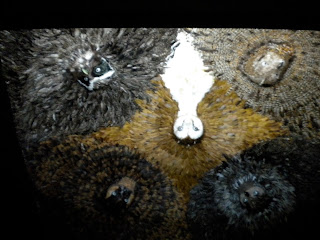 It was hard to take a picture of but - seriously the ceiling of this (rather small) room, was covered in owl pelts. Many of the other ceiling had antlers and such on them. These paired with the classy chandeliers was pretty much my dream decor. 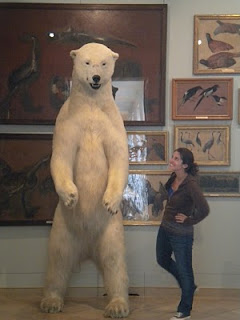 Polar Bears are consistently on the short list for my favorite animal and to get to stand this close to a real (albeit dead) one, was pretty amazing. They are much taller than you think. For reference, I am 5'2.

And many more things (the videos that teach you how guns work, the boar in the hall and the deer in the salon, the pictures of puppies in the touring exhibit) - the bad news? The gift shop was terrible? It didn't even have any good postcards. Just books and books do not do the place justice. I left empty handed and disappointed - try harder Hunting Museum.

Then it was home for dinner (Bear's first duck! So delicious) and game planning for the first full day in Paris.
Posted by Rachel at 5:57 PM