Venice is a great city to spend exactly 2 days in. There is a lot of walking involved in Venice and so.many.stairs. I feel like no one bothered to warn me that anytime you go over a canal, you have to climb way more stairs than feels necessary. But its so small that you can get a solid feel for it in 2 days. 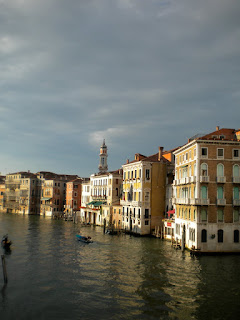 We woke up early and got poppin' on our to-do list that Luigi had so nicely mapped out for us. Most of the things we saw were just big religious buildings, which (again) doesn't really get me all jazzed. But I understood the beauty. I was shocked by the really poor condition of most of the buildings. Chipped paint, exposed cracked plaster - it was so upsetting, because it makes me want to buy one and spend my days fixing it up. But even in those crappy conditions, these buildings cost bajillions of dollars. Sigh. 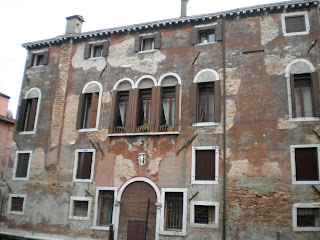 One of our first adventures was to Piazza San Marco. Venice is a city that has completely dedicated itself to the tourist trade and so on most streets there are signs telling you exactly how to get to all the biggest tourist attractions. It is SO useful (also Venice is like a triwizard cup maze, without those signs people would probably just get lost forever). So we got to San Marco in record time and since we got there really early (like 8:30 AM) we were able to go right up to the top of the bell tower. Fun fact, all the roofs in Venice are red. 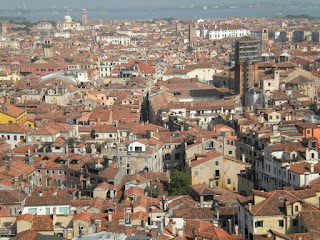 Piazza San Marco is pretty during the day, but you should really go at night to listen to all the bands play. And then it was on to more buildings - but mostly the Teatro La Fenice. Which is the main character in one of my favorite books. You should go in and just see the book store, its totally worth it and you can get an idea of how totally gorgeous the place is, post-fire. Or, you know, go see an Opera.

After all this outdoor walking it was time for some indoor time - at the Peggy Guggenheim, natch. Basically she collected art in her gorgeous house and when she died - they made the house an art museum, full of all her art. The best part is all of the pictures of the house when she was living in it with all of the art on the walls. That is exactly the kind of crazy old lady I want to be.

Also she is buried with all of her dogs (there are like 15 of them) and their names are on the gravestone. And apparently she had her own gondola and would just ride up and down the Grand Canal waving at people. Seriously?! Best old lady ever. And her front porch view is not to be effed with. 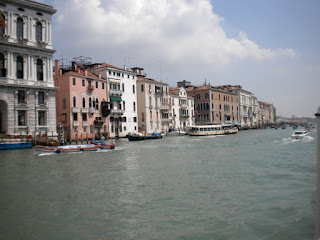 More walking, walking, walking. Discovering that you pay more for food if you eat it outside at the cafe (boo). Finding the best sheets in the world (they have baby tigers on them!), buying lots of presents for myself (and others), and finally going back to the same bar we ate dinner in the night before to watch more soccer and drink more Beer. I know this was poor form of us but we were exhausted and hungry and didn't want to walk in circles to find something that was in our price range, had the game on and was close to where we were staying. Plus it gave me chances to take pictures of the sunset. 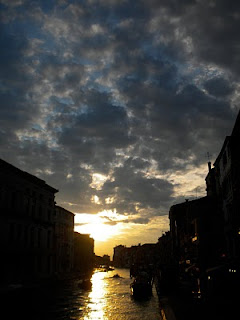 And then we went right to bed to get up (way too early - again) for the train. Most of the getting up early had to do with getting out of Luigi's apartment. He was a very, very, very hospitable host, but also a total European bachelor (nothing creepy happened, but we could tell he wanted his space back).

We got to the train station with our bags that had gotten MUCH heavier in Venice. Oops. We were hoping that Milan would have a bag storage place at the train station much like Venice, Rome and other cities. We get on the train and realize we know nothing about Milan. No problem, won't the Dolce and the Gabana be right there like, waiting for us?

We get to Milan and it is raining, there is no place to check our bags that we can find, and we find out, after a half-hour wait in a line, that we are NOT in a girls-only compartment for our overnight train to Paris. Milan already had its 3 strikes and yet we were stuck there for the next 16 hours.

We haul our duffle bags around the train station for awhile deciding to wait out the rain with some gelato. NO GELATO in the WHOLE train station. Here are some other things that there aren't: wireless internet (even that you pay for), free bathrooms, televisions. What a disaster, Milan.

What there IS, is a fantastic bag store. It is apparently only in Italy (not quite true - but its only in Europe) which gave Bear and me huge fashion boners. The bags are crazy affordable for how nice they are - so we got new purses, which was awesome because then we got to carry them around ALL DAY. (Such geniuses).

Most of our day in Milan was spent walking in concentric circles near the airport looking for something/anything to do, food that wasn't gross/crazy expensive and some Effin' internet. No dice on any of them really. In retrospect we should have gotten on the trolley/tram situation and just gone somewhere, but our bags were too heavy and it was too rainy and we were pretty grouchy. So instead we wandered around and were just mad at Milan, which was far better than being mad at each other in retrospect.

Eventually we went to a cafe to get our last prosciutto and mozzarella sandwich of the trip and OF COURSE it was terrible. They put lettuce on it? wtf? So disappointing. And of course we ordered a beer without choosing a size, so we got 50 cl. beers which was way more than we wanted. So bogus.

Eventually we just went back to the train station and called the day a wash. Bear and I obviously had not packed enough books and so traded which meant she got to read The Namesake (amazing) and I was stuck reading The Summer I Turned Pretty (horrible, so horrible Blogger won't let me tag it). Lose.

Anyway - finally our train got there and we could leave Milan behind.
Posted by Rachel at 7:33 PM