So, the Venitian adventure started actually on our last day in Santa Severa. It was decided that Bear and I should stay at Eugenio's house the night before our train to ensure that we made it in time. This meant that finally we were going to be on our own. No more hand-holding or translating or standing silently while Dad does all the talking

This was something I was incredibly nervous about. For some reason I wasn't nervous about Venice or Milan, I was mostly terrified of the moment we got to the bus stop in Rome and our ride was not there to pick us up. Then what? No phone, no internet, heavy bags. And like most parts of the world, the bus stop in Rome is not in the best neighborhood. But I sucked it up and got on the bus with Bear, saying goodbye to the lovely beach with the piles of trash and dirty water. Buttmunch lost in an epic game of Egyptian Rat Screw which actually screwed me over, because it meant he wouldn't take all the clothes I had regretted bringing home with him. Instead I still had a 40 lb. duffle bag that I was regretting every minute. If I ever do something like this again (read - travel anywhere) its back packs all the way.

We get off the bus and stand in the designated meeting place. Our bus was running a little bit late which peaked my optimism into thinking that maybe whichever cousin was coming to meet us would already be there.

We do some laps around the "station" to see if we recognize anyone. Nope. No cousins.

I bite back my panic.

We make a plan that if no one is there in half an hour we look for a payphone. If that doesn't work, we go back to Santa Severa on the next bus and admit defeat. We're not proud (a trait comes from the other side of the family).

After about 20 minutes a cousin shows up!! We are not going to be kidnapped or robbed or anything. Miracles. Ricky was just running late, and had been given the wrong time anyway. Like I said - a very loose relationship with time.

Ricky takes us back to their house on the subway. The Roman Metro only has two lines. Apparently this is because anytime they try to make a new subway line they start digging and run into ruins. Like actual historically significant old things. So they gave up. Which I found hilarious.

After a delicious dinner and much translating by Ricky (the oldest of Eugenio's kids with the best English) we go to bed. I decide that insomnia and a massive panic attack are exactly what I need before a 6 hour train ride and brand new city. So I am very worse for the wear the next morning.

I wanted to give us at least an hour to negotiate the train station that wasn't in English. Ricky said we would need 20 minutes. I won, as I tend to do with things like this and we got to the train station WAY too early. Of course. But we got to people watch and panic about why our train was the only one without a track number before getting on the train.

I had never been on a train in Europe before. I guess I just thought that they'd be situated like American Amtrak trains with the rows of two seats. Naturally - this was incorrect (at least for 2nd class, who knows how the rich bitches seats look). The seats are 3 across and they're each in their own little compartment. And there is not a ton of space - particularly when the stereotypical Italian lady and her "Ma-Ma" get on with their 6 pieces of luggage.

Anyway - it was a long 6 hours. But it ended in Venice! Venice is kind of amazing, because you have to go over all this water to actually get there - and then you're in the train station and you've kind of forgotten about all the water (mostly because you're appalled that they're asking you to pay 80 euro-cents to use the bathroom) until you get outside and there is the Grand Canal. Amazing.

We had another fun/terrifying wait for someone to pick us up. This was way worse because all we knew was that his name was Luigi, he was 37, had brown hair, and was tall. As you may have guessed, this describes about 98% of men in Italy. So basically we just stood around saying "Luigi?" in an a-little-bit-louder-than-normal voice. Then half an hour or so later, we see a guy with a sign with our names. Of course!! Luigi works in the tourism industry (which is pretty much the only industry left besides trash collector and gondola driver) and so knew what he was doing.

Luigi believes that all American girls between the age of 17 and 30 only have one goal - to get drunk. This, naturally, was not really our scene and despite our insisting otherwise, he was sure we wanted to get wasted and come home at 4 AM. I am sure that after we were in bed by 11 every night he is just confused.

The first day we were pretty confused and exhausted but we went on an adventure to find gelato. Instead we found a prosciutto sandwich which was almost as good. Luigi gave us a map that only had about half the streets labeled on it which, if you know Venice, is almost more trouble than its worth.

I tried to calm my OCD and allow us to just get ourselves lost and it worked out okay. There was a lot of excess walking but it was fun. There was so much to see. 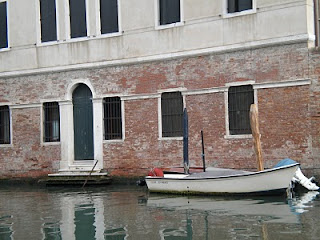 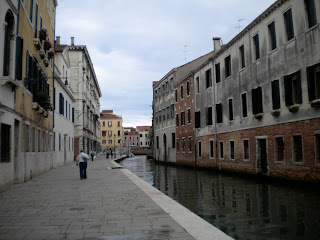 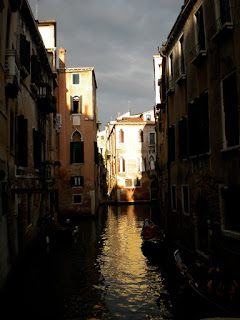 We didn't talk to that many people, but the ones we did encounter were all incredibly friendly and willing to work within the confines of our limited Italian. We explored until 8 when we watched our daily world cup game and each drank an Italian beer which was surprisingly delicious before heading back to Luigi's and going directly to bed, despite the fact that we were American girls.
Posted by Rachel at 5:16 PM