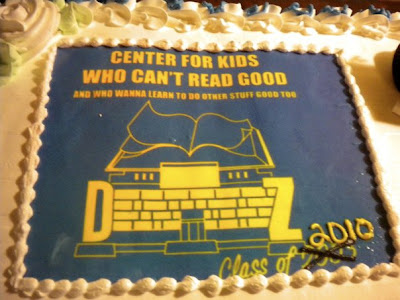 Excuse the extended break - I've been trying to be better about posting at least a few times a week but I went home to the land of crab cakes and football (with a quick stopover in the land of moose and lakes) and did not have a ton of blogging time.  My younger-but-not-smaller siblings both managed to maintain the family average by graduating on time from various academic institutions.  Buttmunch from Plymouth State University and the Bear from our local High School.  I am very proud of both of them, mostly for actually graduating and also not puking/falling during the ceremony (our family standards are pretty low).
After the graduations (which themselves seemed utterly endless.  Seriously - so so so boring listening to people's names) there was the obligatory graduation party.  Thanks to father time and uh, mother tedious there was an obligatory 4 day lull between the last graduation and the party itself.  Which was good- because it gave everyone time to prepare and call maids to come clean the house (the maids themselves should really be their own blog post - maids are awesome).  It also gave me time to see people I love and hardly ever see - also eat crabcakes, play bar trivia, imbibe a little too much and spend some serious quality time with my siblings.
My siblings and I are exactly 4 years apart in school - which is convenient if you think that it means my parents only paid for one college education at a time, but also craptastic, because it means they're paying for a college education for 12 years in a row.  2 sides to every penny, Amigos.
Since we're this far apart, our friend circles don't overlap at all.  In fact, there are a fair number of my sibs friends that I used to make sweet, sweet money baby-sitting for.  And we've always given each other a serious hard time.  Buttmunch for being a lazy boy, Bear for being the baby, and me for being the bossy (always right) big sister.  But in general, these days, we get along pretty well.  Which is kind of awesome...but there are still some things that give me flash backs to being little.
Once upon a time, millions of years ago (when leggings were cool the first time around) - Buttmunch and I told Bear that she was under no circumstances allowed to sing in the car unless she knew every single word to a song.  This was the law and it would be followed.  Mostly by her.  Not so much us.
And now, my sister knows every word to every song on the radio.  Which is impressive (although not that impressive when you consider the lack of variety on the radio these days).  Its nice that we could give her this gift by being bossy d-waffles.  You're welcome, Bear.
Anyway - the rest of the 10 days back East were also really lovely (there was a zoo and a wine/beer tasting - at the same.time), but that kind of stuck with me.  The fact that my baby-sister is all graduated from high school and still follows my stupid rules.
In other news - My summer is going to be very awesome, and I'm very excited.  Also exciting? Nora Dunn just walked into my place of employment.  I get excited from the weirdest celebrities