I think my love of voting stems from watching too much West Wing as a teenager, and assuming that if I voted enough times eventually Jed Bartlett would be president and Allison Janney would be my friend and everything would be perfect.

It hasn't turned out that way - but voting is still one of my most favorite things to do.  Up until this year, I voted absentee in every election, which is fun and convenient, but does not really hold a candle to actual voting.  Which is why I am probably one of the only 26-year olds who gets truly amped to head to my polling place.

And!  In the past four months I've gotten to vote in two different elections!  And they're not your run of the mill elections either, I am responsible for picking the first mayor in approximately 4 billion years who doesn't have the last name Daley.  Apparently, this is huge.  I've only been here for five years, but people say he was mayor when the only constituents were cave people, and his Dad was mayor of the Dinosaurs.  The Dinosaurs!

The last election did not turn out so great - because we apparently live in a country/state where everyone has lost their goddamed mind, or just quit cold turkey on caring about anything.  This was all fun and good in November when I could just be morose about the future, but now the future is here and I am angry.  For a million bajillion reasons, but mostly just - I am angry that people don't realize that they caused this...this funding of what's really important (NASCAR) and this refusal to fund the fluff stuff (Planned Parenthood, NEA, blah blah thing) - wait, strike that.  Reverse it.

Not voting in America is kind of like not drinking in Canada or another ex-British colony (or really anywhere in Europe).  They practically give the booze away when you're, like, a toddler, and you stick your nose up at it?  Wait, what?  Why?  There is really no reason.  "Oh, I'm not drinking because it'll take time out of my busy day of playing on facebook."  "I'm not voting because if I have one ballot I'll have to work out twice this week."

Anyway - so I'm all voted.  And I will be totally honest - I did not have time to make a fully informed and educated choice in my alderman election, which is distressing because its pretty important, but I was busy moving and knew that almost anyone would be an improvement over the current alderman.  So I voted with the person who had the funniest sign in their campaign headquarters window - 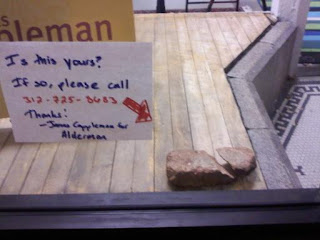 back story - there was a rash of window breaking in campaign offices back in the Fall.  I like that this guy had a sense of humor about it.  If nothing else, this ward full of gang violence, mismanagement of public funding, and disaster-crap needs a little humor - and probably more cops (also he kind of looks like Colin Firth).
I do feel like I made the best choice for mayor.  Its distressing to know that the person you're voting for has no chance of winning, but refreshing to vote for someone who has ideals that you agree wholeheartedly with (also - he's the ONLY person running who has not been or is not still a criminal - stay classy Chicago).

But none of it really matters - what matters is I did it.  Its so awesome that we live in a place where you get to vote.  And if you don't think that's true, look at the people all over the world who are fighting for that right, right now.