As I hastely write this knowing that there is a mountain of work growing on the window behind the one I type it - I realize there are two types of bloggers (originally that said bloogers - and I almost didn't change it, it entertained me so).

Type one are the ones who write carefully crafted pieces that they then put in to an internet weblog because they don't work for the Washington Post or Cosmo or Parent Magazine.  Their pieces could just as easily fit in those places as they do in my google reader.  But they don't go there, they go here, for whatever reason. These are the bloggers who take pictures not just to capture a moment but with a thought of, "I am going to blog this" as they click the shutter button. And they don't just upload pictures and words, they Edit to capture everyone in the best light.  Even when blogs are about being frustrated or mad or whatever - it is so goddamned glamorous you feel almost envious of them.  Perhaps problems would be better if I wrote about them in sepia tone. I envy these people for their commitment to the interwebs (and I am not an idiot, I know many of them do this for the hamiltons and the free swag) - to be willing to give up other things (sleep? mostly seems to be the first to go) just to write something as silly as a blog.

Type two are the ones who blog with the unbridled passion of your friend who plans spontaneous trips to Las Vegas. The ones who see no flaws in quitting a job over the quality of the coffee in the break room. They post nearly constantly, more than daily sometimes - it can be no more than a phrase or a single picture, sans caption, but it carries its own weight and you never think to question if the internet needed it. Perhaps its that these people tend to be amazing writers who do not need the filter of an edit (or Instagram), they just can exist and make that existence matter.

I feel like I wobble slightly between the two.  I so desperately try for number 1 but more often than not, the pictures just stay on my memory card. I start a long blog and it takes three days - so by the time I am finished, I don't bother to edit it - leaving it with all the inaccuracy of a type two but without the brevity. I wish I felt like my thoughts validated the existence of posting on my blog more often but in most cases, I end up just second guessing myself so much that I have whittled the blog idea down to something that I can't even bring myself to care about... something to work on.

At any rate, here is a picture of Miller. He is a very clever and handsome cat who doesn't have these problems. 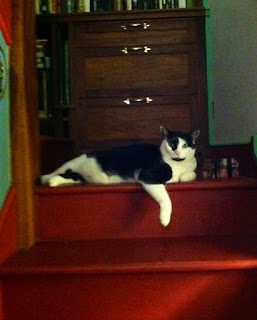 That was the best conclusion I've ever read.

And I think I do both too. Although I frequently amuse myself by taking breaks from writing (for school) to write (just because).

Sometimes, I wish I was Miller and did not have these problems.