Hey everyone, January 31 is a pretty special day around these parts.

Last year on January 31, my favorite crazy bitchface let some state-school educated doctor root around in her insides, take out her bone marrow, and then hop her up on "recovery" drugs.

Later, some other Doug Ross wanna-be put that bone marrow in a sick little boy. And with any luck, he is still doing okay (although even if he isn't, she gave him that many extra days for his parents to snuggle and love him).

All because T-Bone put a q-tip in her mouth.

This is your now-annual PSA that you can be as brave and strong as my favorite Ben's Chili Bowl companion.

Take a minute out of your afternoon Facebook break and go to Be The Match to learn more about bone marrow donation. 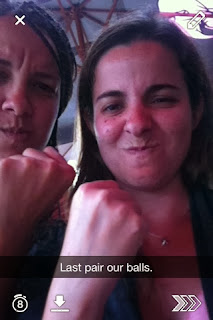 If you only spend today learning about it, and then an entire year screwing up the courage to do it - that's fine. People will need your bone marrow next year too.

I love you, T - this is the only picture I have of us from 2013. I do not know which last pair I am referring to, but the tough-broad sentiment remains the same. Also, maybe in 2014, we can take pictures that aren't snap chats?