Things we take seriously in this house. 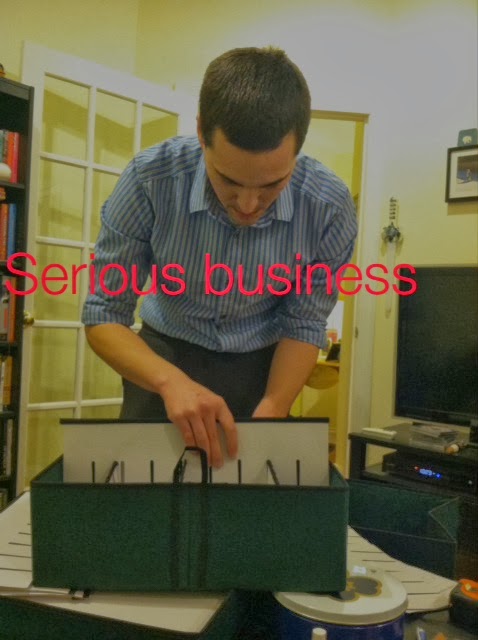 After casually mentioning that perhaps tossed-in-a-box-with-some-newspaper might not be the best way to store all these very fragile Christmas ornaments we have acquired (although, to be fair, that is how it has been done in my mother's house for hundreds of years), I then tossed all the ornaments in a box. But I was told a new solution was being workshopped.

Two weeks of intense research by Boyfriend followed while I completely and totally stopped caring and moved onto other things like eating all the cheese I could find.

Last night the organizers arrived.  Three of them. With bonus wreath organizer. All attempts to help with the set-up process were brutally shot down as this was "important."

Eventually I was given permission to put some ornaments in the newly constructed organizers, and then was told I was doing it wrong. I do not think of myself as particularly skilled at anything but being told that I could not handle this task was a little much for my dignity so I went to bed.

I awoke this morning to find a completely organized Christmas situation in my home. Things that already kind of home had a new and better home that was color coordinated and built to last.

For the record, the ornaments of my childhood remain stored in the shirt boxes that they have been in since the early 80's. Most of them pre-date my 21 year-old sister's existence on this planet.

It is a strange thing combining lives and traditions and finding your joint way through life. You are probably doing it wrong. But it will be okay.
Posted by Rachel at 2:04 PM