Two nights ago, I tweeted this:

Then this conversation happened between Boyfriend and I: 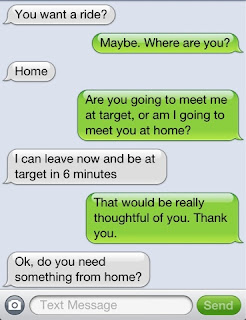 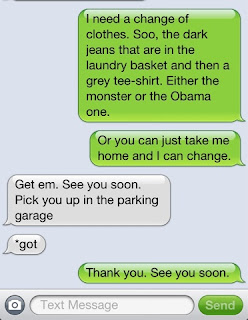 Here are a couple of awesome things that happened in this conversation:

1- Boyfriend responded to a tweet with a text message. Which seems strange to me because I am a slave to technology.

2- He rescued me again! He really enjoys being a knight in shining armor- if shining armor is Notre Dame sweatpants and a Hanes white t-shirt.

3- I said yes to being rescued. This could have been like one of the millions of other  times when someone said, "let me help you," and I, like the stubborn 3 year old I am say, "No! I do it myself!" But I said yes, because I am working on this.

4- Yes, I absolutely changed my clothes in the back of boyfriend's car as he drove me back down to Belmont. There are some skills that you develop as a young ballerina that turn out to be very useful in later life.

5- Turns out that with the rescuing the trip took 25 minutes instead of 15, but thankfully theaters run later than me a lot of the time and I still saw the whole show.
Posted by Rachel at 8:49 AM