Boston has always been a stepping stone to the final destination. I'm there because I am trying to get somewhere else. Once, when NeedyT was coming out to visit me during my residency on Nantucket, I came for a little over 24 hours just to buy underwear and eat fast food. Ridiculous, but necessary. It was 104 degrees in the shade those entire 24 hours, making it ridiculous, necessary and pretty miserable. Boston was the elephant graveyard, Simba.

Last year, after a trip up to visit Buttmunch, I found myself with almost a full day here since that fateful trip that lodged Boston in my head as the bad place. In the ten hours I spent here with Cinderella last year, I ate proscutto, drank free beer and devoured a game changing lobster roll. This brought Boston up significantly in the rankings, but it still remained a city of being almost-there.

This year, Boyfriend's job has dangled the possibility of a Beantown relocation in front of him like a scrawny, still dirty carrot. We figured before we completely shot the idea down, we would spend a few full days in the B.

The trip was made even sweeter by a few days on Nantucket on the front end, and an overdose of snuggles with one my new favorite humans. But ultimately, when we left we knew, it was not the city for us. What it has in being ocean-side and precariously closer to my East Coast family and friends does not really make up for it's over-priced real estate, lack of gridded street, and just "meh"-ness.

We'll go back to visit though, if only because we dropped the ball so hard on the Isabella Stewart Gardner Museum (GUYS! That sweetpiece of architecture is closed on Tuesdays, do not drop the ball like your ball dropping friend, me). 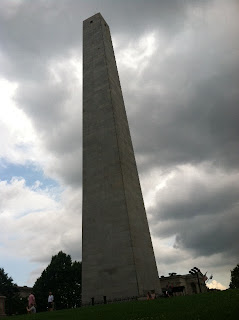 Freedom Trail. Hey, are you interested in 10 or so buildings that are all kind of the same, with the same back story, and a couple of old-ass graveyards tossed in? Sah-weet. Get your ass on that little red line that through Boston. Real talk: Boston is full of game changing history. Literally. The Freedom Trail takes about two hours and you should do it. BUT! You should do it NOT on a Monday for the very simple reason that the USS Constitution is closed. Bogus.

Also if you're looking to really reevaulate your own personal level of physical fitness: climb the stairs of the Bunker Hill Monument, get lapped by a woman wearing a tennis skirt, hate everyone in the universe and then and cry into a bowl of clam chowder.

The Boston Tea Party Museum. It is absolutely the most over priced thing I've ever been a part of, but there is something very satisfying about throwing tea into the river. In fact, if it was an hour of tea throwing, it might have been totally worth it, but there was way more listening to creepy anamatronics and LARPers teaching me about history than I would have preferred. Also, there is something oddly strange about playing pretend and yelling about throwing over our oppressors when we're the ones who do most of the oppressing now. But, you get a feather?! So there's that?!

Walked all the places. We pretty much ate all there was to eat for seven days straight and with the promise of a homemade lobster roll on the horizon, we felt as though we had to do something to earn it. So we walked from our hotel in the Chinatown-y/Financial District-y/How is there always a traffic jam-y neighborhood out to Somerville (nearish to the Porter Square red line stop, for those of you playing along at home). All told it was about 4 miles of walking through Boston Common, along the Charles River, through the faux-suburbia of Cambridge. In addition we walked Back Bay to Fenway which is not nearly impressive, but - I have to say, Boston is a totally walkable city. Its mostly flat, and pedestrian friendly. I dig that about you, Boston.

What We Ate:
Homemade Lobstah rolls. Not only did my friend make one of the cutest babies in the universe, she married a dude who makes his own lobster rolls. Winner, winner Lobstah Dinnah. I never feel quite so high on the food chain then when watching a lobster become my meal. Sorry you are so delicious, lobster.

Boston Commons Coffee Company. We ended up having breakfast here both days. Both days it was totally packed. On the second day, they had run out of bacon...it was not even 9 a.m. Were breakfast not such a highly charged, emotionally meal for me on a daily basis - we would have walked out then and there. But Boston does not have much going for it in the weekday breakfast scene. So I made it through. Their coffee was mega delicious though. And the food was good, except for the bacon foul up.

Warren Tavern. There is no official oldey-timey tavern of the Freedom Trail, but if Warren Tavern wanted to dub themselves that - they totally could. Located just far enough away from Bunker Hill's stairway of fat kid shaming to feel like you totally earned that secound beer, but close enough that you can get there without actually passing out on the incredibly narrow sidewalk. Its got that dark-wood-rafter-low-ceilinged-lots-tarnished-gold look of pretending that you're plotting the overthrow of the government. Also, the clam chowder has All.The.Clams. Oh man! Guys, seafood on the east coast is serious business. And I love that about the East Coast. Also, they know their way around a crabcake BLT which they should since they're the oldest tavern ever in the history of their internet website. 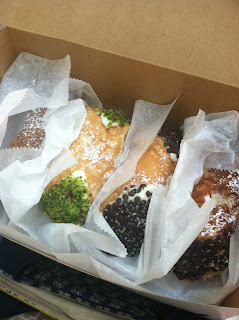 Corner Tavern. We wanted to check out the Back Bay to see how the real Brahmains live it up. Apparently the upper class likes their service bad, their grilled cheese delicious and their bar food reasonably priced.

Flour. After we worked up a tea-throwing sweat, we went to the restaurant ranked #13 in the city. And, I'm not gonna lie - as sandwiches and whoopie pies go, it was pretty satisfying. I would absolutely tell you to go there post tea-throwing. But, if this is your 13th best restaurant, either everyone on Trip Advisor has terribly low standards or you have no good eating in your whole city.

Wagamama. GUYS. One time, I went to London and I visited myotherhalfRacheltwin and it was awesome and we ate at Wagamama, which was also awesome, and that trip happened six years ago, which is CRAZY. Anyway, while we were there, we went to this amazing little noodle shop near the Globe theater. Then every time someone would post facebook pictures, I would always see it. It is the go-to for all your noodle needs in Foggy London Towne. When we walked past the one in Quincy Market, I was at like a 40 on a scale of one to pants-peeing excitement. What a random find! Naturally, I demanded it as our final Boston meal, to be stuffed in a backpack, x-rayed by TSA and then enjoyed on the plane to the jealousy of all our sucker planemates.

Boston. I do not miss you. However, we have one more date so I can peep this sweet, sweet architectural treasure - so man up before I get there. More London chain restaurants and babies, please. 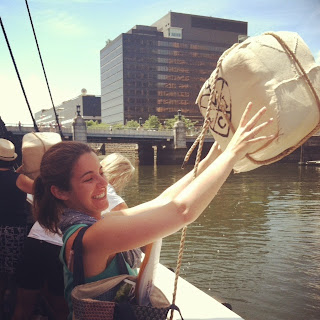