the years go by so fast 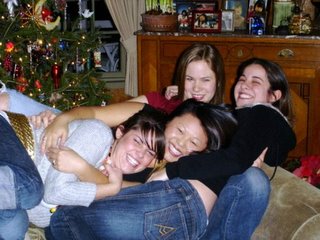 So. I've been home for a week now. Seven days in Middletown. The prospect of spending another two weeks here is not quite filling me with glee. Here's the thing. My town? Boring. Booooring. I forgot how boring it was because the bordom can be staved with an automobile. I no longer have one of those. So I stranded in my house with my 13 year old sister and dial up internet and a constant allergy attack. I think it may resemble hell a little bit. We've gotten ourselves into a bit of a routine. I wake up at 2. Sit around my house. Then at 11, A, H, and C come and we sit around someone elses house until 4 in the morning. Then go to bed. wake up. lather rinse repeat. There have been some enjoyable moments. I got stinky drunk with kids from the class of 2002 out in public instead of down in a basement because we can do that now. I have had lunch like a grownup. I've seen a lot of people and heard a lot of gossip which would lead me to believe we are all getting older even though that thought totally freaks me out. I saw a kid I had a crush on pretty much uh, forever, and he is a grown up. Like. grown up. With the manners and the facial hair. Weird. I took my brother shopping at American Eagle which was pretty much the funniest thing ever (if you know my brother...which you probably don't...so just imagine the goth kid who dresses in black and is grumpy all the time hanging out in AE)
In AE:
Buttmunch: Hey, Rach? I'm confused.
Rachel: By what?
Buttmunch: Well, is this the girls section or the boys section?
Rachel: Uh. Just guys. Why?
Buttmunch: Which self respecting male wears a pale pink polo shirt?

I also realized how much I don't about my mom and sibs day to day life anymore. Its kind of weird. My mom works strange hours so no one ever sees her, we just get notes. Written in red ink on backs of envelopes. The eating habits are totally absurd. I think we own stock in Ramen Noodles. My mom and I saw a woman crying in the grocery store and acted like it was no big deal. No big deal? Since when has grocery shopping become a three hankie event? Is this something else I have to worry about when I grow up? That at some point, string cheese and Fuji apples are gonna make the tears run down? If that's the case I'll stay young forever.
Posted by Rachel at 2:55 PM